The condo, which made headlines in the past year for its spate of vandalism cases due to disputes in its en bloc sale process, reached the 80 per cent consent level last December. 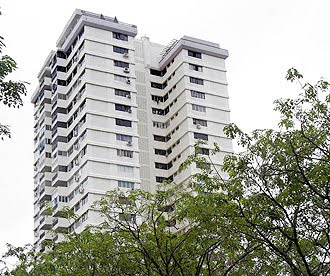 The Laguna Park condo, which made headlines in the past year for its spate of vandalism cases due to disputes in its en bloc sale process, reached the 80 per cent consent level last December. --ST PHOTO: ADELINE ONG

Its marketing agent Credo Real Estate said the tender was put on hold until now 'as major developers have only recently returned to the land market with confidence.'

If it succeeds in finding a buyer, Laguna Park wil be the second billion-dollar en bloc deal in Singapore, after the 618- unit Farrer Court which was sold to a CapitaLand-led consortium for $1.3388 billion.

Like Farrer Court, Laguna Park is an ex-HUDC estate in Marine Parade and was privatised in 2007.

At the current price tag, owners of the apartment units will receive sale proceeds ranging from S$2.1 million to S$2.3 million, while the penthouses will gain between S$3.5 million and S$4.1 million.

It is also one of the few sites that come under the amended Land Titles (Strata) Act meant to tighten the en bloc sales process, which came into effect in October 2007.

Laguna Park has a land area of about 677,493 sq ft and a gross plot ratio of 2.8 under the current 2008 Master Plan, with a building height of up to 36 storeys, subject to relevant approval.

Credo's deputy managing director Tan Hong Boon estimates that the buyer would be able to build close to 1.9 million sq ft of gross floor area or some 1,500 apartments with an average size of about 1,200 sq ft.

This includes an estimated cost of about $400 million payable to the Government for maximising the plot ratio of 2.3 and the topping up of the current 67 year lease term to 99, said Mr Tan. 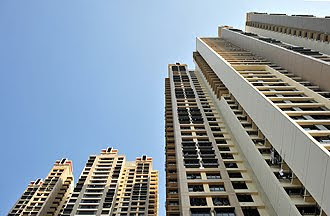 'The flat prices would probably go up ... by 1 per cent, 2 per cent,' said Mr Mah. 'It will just keep on going up if the economy recovers as people expect, and if confidence returns but affordability will always be there.'

HDB resale prices rose 1.4 per cent in the second quarter to a record high.

Resale flat prices go up in tandem with a very strong market, Mr Mah told reporters at the launch of the final skybridge at The Pinnacle@Duxton on Wednesday.

'We subsidised you when you buy and we increased the value of your flat when you live in it and... facilitate you to monetise it when you grow old. This is the best form of investment and welfare for the people,' said the minister.

It sits on the site of the area's first two HDB blocks, which were built 50 years ago. It was the first project in which an international architectural competition was called to get the best design ideas.
Posted by Richard Yeo at 11:52 PM No comments:

THE Government is considering reinstating the 'confirmed list' of new sites for sale at its year-end review - a move seen by experts as a measure to cool the buzzing property market. 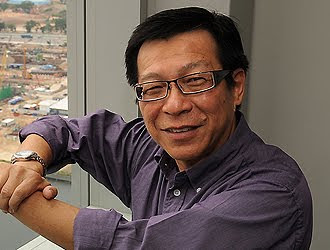 National Development Minister Mah Bow Tan said on Wednesday: 'As far as (private home) prices are concerned, we want to make sure the property market do not become overheated, that there is no excessive speculation.'

'The government is monitoring the market very closely. If there's any necessity, obviously we will take certain actions. One of the things we are looking at is the Government land sales,' he told reporters at the launch of the final skybridge at Singapore's tallest public housing project The Pinnacle@Duxton. It has 1,848 units, of which 111 are unsold.

Bringing back the confirmed list is a 'a definite possibility', said Mr Mah.

The Government suspended the confirmed list of sale sites last October when the property market was in the doldrums and Singapore slipped into a recession.

Restarting the confirmed list was a measure suggested by property developer Kwek Leng Beng as a possible Government move to cool the market.

Singapore's market for new home sales have shot through the roof recently, with some projects sold at benchmark levels.

Resale prices of many popular projects have also risen from the lows early this year.

In tandem with the recovery in the Singapore economy, Mr Mah said HDB resale flat prices will continue to rise this year - by perhaps 1 or 2 per cent.
Posted by Richard Yeo at 11:50 PM No comments:

THE run-up in Singapore’s private home prices may fizzle out next year, as several obstacles are still impeding global growth momentum.

That is the view of London-headquartered Royal Institution of Chartered Surveyors (Rics), which represents and regulates property professionals and surveyors. 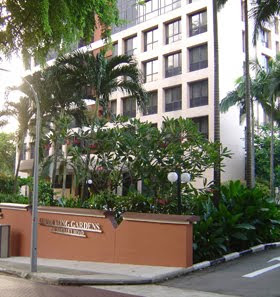 It issued a report on Monday concluding that the sharp residential market rebound here may peter out. It cited higher unemployment in Singapore as a potential risk factor that could undermine the property rebound here.

In contrast, top local developer CapitaLand remains bullish in its outlook for Singapore, and will soon launch a 1,000-unit condo in Gillman Heights and 165 resort-style homes at the former Char Yong Gardens site. CapitaLand’s upbeat outlook on the market here was reflected in slides presented by its vice-president of investment Anson Lim at a CapitaLand CEOs forum held yesterday.

The current market upswing is being driven by positive sentiment and supported by long-term fundamentals, according to the slides. CapitaLand expects the Urban Redevelopment Authority price index to recover between 5 per cent and 10 per cent for the rest of this year, from the trough in the second quarter. The index showed a fall of 4.7 per cent in the second quarter.

The Rics report was rather less optimistic. It said while an upturn in activity is already well under way in the residential market, significant risks present a challenge to the market in the medium term.

“Labour market indicators, such as unemployment, certainly point to a less benign story,” it said. Unemployment in Singapore looks set to rise sharply in the coming quarters. Based on previous relationships with the world trade index, unemployment could easily climb to 5 per cent before the year is up, it said.

Singapore’s unemployment rate was 3.3 per cent in June. Labour chief Lim Swee Say said last month that the jobless rate this year was unlikely to match the peaks of past downturns. The rate peaked at 4.3 per cent in 2003.

In the short term, residential prices may be propelled higher on an improved global economy into the fourth quarter, said the Rics report.

However, the duration of previous downturns indicates further declines in prices may well occur, should global trade momentum fall short in the medium term as high debt and rising real interest rates weigh on the strength of the global growth recovery, it said.

This, it added, would temper buoyancy in the Singapore labour market and in turn would prevent a return to previous highs in the property sector.

The Rics report also noted that the run-up in office prices has been less acute, compared with residential prices’.

“Despite improved signs that economic activity in Singapore has passed its worst point in the cycle, the global economy will once again be pivotal in dictating the sustainability of that upturn, with real property prices unlikely to surpass recent highs in the coming quarters,” it said.
Posted by Richard Yeo at 11:46 PM No comments:

同样的，尽管办公楼和工业厂房需求最近开始恢复，麦俊荣预料，4％的下调不足以吸引发展商进场。他指出，市场上供应充足，目前有1100万平方英尺的办公楼在建设中。
Posted by Richard Yeo at 12:07 AM No comments: 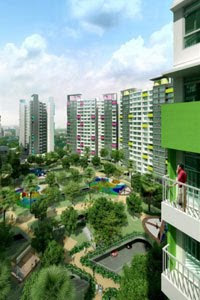 公众可通过建屋局网站（www.hdb.gov.sg）提出新组屋申请，并可到大巴窑建屋局中心3楼展示厅参观及索取销售资料，截止日期是本月14日。
Posted by Richard Yeo at 12:04 AM No comments: