AFTER years of decline, one of the first malls in the western part of the island has been given a $26 million makeover and a new name - West Coast Plaza.

Formerly known as Ginza Plaza, the 15-year-old Clementi complex's interior has been completely refurbished and will have a Miami-inspired tropical feel with palm trees and fountains when it opens next month.

Reflecting a new upmarket focus, it will have many mid-priced restaurants, and fancy touches, including the country's first supermarket with a wine lounge. Anchor tenant Cold Storage will offer wine-tasting sessions hosted by an in-house expert every evening.

Food and beverage outlets like Fish and Co, Thai Express, and New York New York will also be 'posher and sleeker' than usual, according to Ms Susan Leng, deputy director of retail management at mall owner Far East Organization.

She added that a 'very well-known' fashion retailer from the United States will open its first Singapore outlet in the mall, though she declined to say which one.

The mall is hoping to attract a range of shoppers, from nearby National University of Singapore students to expatriates.

Clementi residents and students are hopeful the revamp will enhance a neighbourhood that so far has been lacking higher-end malls.

NUS business student Ms Amanda Eng, 23, said: 'It's good because there's a dearth of eating places and nearby shopping.

'We usually have to go to Holland Village or sometimes even VivoCity. The services at the mall will be good especially for those who stay in university halls.'

Long-time Clementi resident Mr Wesley Sum, 25, hopes the new mall will attract more people to the area and give it 'a more upmarket vibe'.

Originally built to cater to Japanese expatriates, Ginza Plaza was part of a wave of heartland shopping malls which sprung up in the early 90s. Its counterparts include Junction 8 in Bishan, Tiong Bahru Plaza, and Northpoint in Yishun, which have undergone revamps in recent years.

The superstitious may say it was ill-fated from the start. In 1992, a gas explosion at its construction site left three dead and more than 120 injured. Then in 1994, a year after its opening, over half of its tenants shut for two days in protest against high rents and low customer traffic.

It continued to experience such problems in the 1990's, before gaining popularity among teenagers as a gaming hub with its comic shops, gaming card stalls and LAN cafes. But that too eventually died down.

The mall still has its work cut out for it. Like other projects coming up, it has had problems attracting retailers amid the uncertain economic climate. It is currently only 60 per cent full, although Ms Leng expects that number to hit 70 per cent soon.
Posted by Richard Yeo at 10:04 PM No comments: 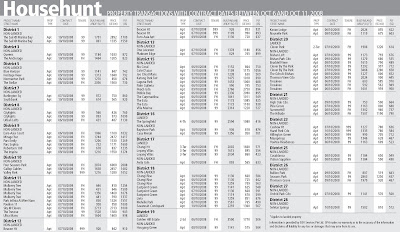 Posted by Richard Yeo at 9:56 PM No comments:

It will cater to businessmen, independent travellers

The company has spent $130-$150 million developing the 336-room hotel and will position it as a four-star business establishment. However, its proximity to Clarke Quay is also expected to make it attractive to free and independent travellers.

'The group's growth has been achieved mainly through acquisitions, so we are excited about our first new-built property,' said Park director Allen Law. 'We have plans to acquire 10-12 more hotels in the next few years, mainly in the Asia-Pacific region.'

Park also said yesterday it has acquired a third hotel in China - Grand Park Xian - as well as its first in Japan.

'Japan is one of the key markets we are looking at and we hope to acquire more in the future,' said Mr Law. The group will take over its new hotel in Xian on Nov 1.

Park now operates its own hotels, but plans to extend its management arm to other hotels.

Although the local tourism industry is seeing fewer arrivals, Mr Law is optimistic about the new hotel here.

The company does expect a slowdown, but business is unlikely to be affected too badly, he reckons.

The group was a participant in the inaugural ITB Asia trade and travel show yesterday.

The event provided 'a platform to expand our brand awareness in Asia and beyond,' said Park's senior vice-president Mohd K Rafin.

Other participants included hotel chain Best Western, which is looking to showcase its properties in Asia, as well as promote its intended expansion into South-east Asian countries such as Singapore, Malaysia, the Philippines, Indonesia and Thailand.
Posted by Richard Yeo at 9:55 PM No comments:

WEST Coast Plaza, which underwent a $26 million makeover by Far East Organization, is currently close to 70 per cent leased, ahead of its soft launch on Nov 15. 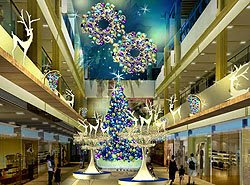 $26 million makeover: The mall has set aside 31 per cent of its three floors of retail space for F&B outlets

Property developer Far East has also committed $1.6 million to advertising and promotion programmes for the mall till January 2009.

The mall has set aside 31 per cent of its three floors of retail space for food and beverage outlets. Susan Leng, deputy director for retail management at Far East Organization, told BT that this is in line with the trend of Singapore's malls 'going bigger with food'.

The proportion of retail space typically allocated to eateries across Far East's malls has grown from 20 to 25 per cent previously to between 28 and 35 per cent now, she said.

The refurbished West Coast Plaza will feature an alfresco dining area targeted at the visitors it aims to draw - students and working professionals from educational and research institutions nearby, and families from private residences in the area.

The fact that there has not been much uptake from fashion and accessories retailers yet is not a real concern, Ms Leng said. 'That segment is pretty soft islandwide, they're always the first to be hit in a downturn. We believe we can bring in a more focused and unique selection of retailers if we wait. We're in this for the long haul and the economy will come round,' she said.
Posted by Richard Yeo at 9:53 PM No comments:

WASHINGTON - THE number of American homeowners ensnared in the foreclosure crisis grew by more than 70 per cent in the third quarter of this year compared with the same period in 2007, according to data released on Thursday. 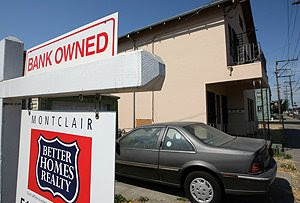 Nationwide, nearly 766,000 homes received at least one foreclosure-related notice from Jul through Sept, up 71 percent from a year earlier. -- PHOTO: AFP

By the end of the year, RealtyTrac expects more than a million bank-owned properties to have piled up on the market, representing around a third of all properties for sale in the US.

That's bad news for anyone who lives nearby and wants to sell their home. While foreclosure sales are booming in many areas, those properties are commanding deep discounts and pulling down neighboring property values.

'It has a pretty significant impact in terms of pricing,' said Mr Rick Sharga, RealtyTrac's vice president for marketing.

RealtyTrac monitors default notices, auction sale notices and bank repossessions. More than 250,000 properties were repossessed by lenders nationwide in the third quarter, 81,000 of which were taken back last month.

Six states - California, Florida, Arizona, Ohio, Michigan and Nevada - accounted for more than 60 per cent of all foreclosure activity in the quarter, with California alone making up more than a quarter of all US foreclosure filings.

Detroit and Atlanta were the only cities outside California, Florida, Nevada and Arizona to make RealtyTrac's list of the 20 hardest-hit metropolitan areas.

The combination of sinking home values, tighter mortgage lending criteria and an economy that many economists think has already slipped into recession has left hundreds of thousands of homeowners with few options.

Many can't find buyers or owe more than their home is worth and can't refinance into an affordable loan, with the global credit crisis making loans far less available.

For those who can qualify for a loan, or have cash to invest, there are bargains to be had, especially in ravaged markets like Nevada and California.

Last month, foreclosure resales accounted for more than half of existing home sales in California last month, as home sales jumped 65 per cent from a year ago, while the statewide median home price fell 34 per cent to $283,000, according to MDA DataQuick.

RealtyTrac, however, reported foreclosure filings in Sept were actually down 12 per cent from Aug. But much of that decline was the result of new state laws that delay the foreclosure process.

In California, for example, lenders are now required to contact borrowers at least 30 days before filing a default notice. A similar law in North Carolina gives borrowers an extra 45 days.

Still, that's not likely to be enough to save homeowners who owe more on their mortgages than their homes are worth. Nearly 12 million of the 52 million Americans with a mortgage - that's 23 per cent of them - are in that position, according to Moody's Economy.com.

It remains to be seen how much the government's intervention will stem the housing crisis.

Earlier this month, the Federal Housing Administration launched a program that aims to prevent foreclosures by allowing homeowners to swap their mortgages for more affordable loans, but only if their lender agrees to take a loss on the initial loan. The bill is projected to help about 400,000 households. -- AP
Posted by Richard Yeo at 9:47 PM No comments: