Getting The 'real' In Real Estate

JUDGING by the response to the recently launched Caspian and Alexis, real estate remains a key element of the typical Singaporean's wealth-management strategy.

While cash is still king, real estate - like gold - is something tangible to hang on to. And recent downward price adjustments are making it an increasingly attractive asset class. What is making new launches even more enticing is that investors are cottoning on to the fact that new interest absorption schemes (IAS) offered by developers through banks are very much like the former deferred payment scheme (DPS).

At the recent launch of Alexis, units were not only offered with IAS but did not come at higher prices, typically 3 per cent more. Buyers, said mostly to be Singaporean investors, homed in. The project was almost fully sold in less than a week. Considering the depth of the economic downturn, this would seem to defy logic. So, could real estate be where the smart money is migrating to now?

Looking at yields from stocks, bonds and even fixed deposits, and comparing these with IAS, which is essentially an interest-free loan on almost all new property, the argument for putting your money, or at least some of it, into real estate is compelling - especially if you subscribe to the notion that real estate values always rise in the long run.

This last point is what differentiates property buyers now from those who bought in the run-up to peak prices in 2007 - they are more realistic.

Certainly, few buyers today would be hoping to make a fast buck. Indeed, prices may actually have some way to go before they hit bottom.

Reality appears to have set in, with investment horizons now longer than the time it takes to flip a property. The only danger is that if the recent surge in sales has more to do with IAS and less with the fundamentals of the market, recent experience is just another round of speculation, albeit a tiny one.

Does IAS encourage speculation? Some believe that unlike DPS, IAS is much more stringent insofar as terms go. A purchaser who is offered the IAS has to take out a loan with a bank, which will carry out credit checks before granting the loan. In addition, the purchaser has to make progress payments, part of which may be disbursed from the bank loan, to the developer. This amounts to 60 per cent of the purchase price of the property before the temporary occupation permit (TOP) is granted, including 20 per cent at the downpayment stage.

With DPS, as little as 10 per cent of the purchase price was payable by the purchaser before TOP.

Given that a buyer has to commit to a loan and make progress payments, the authorities do not believe IAS encourages speculation.

Hopefully, then, what the market is experiencing now is the realisation that real estate is fundamentally a safe asset class - not a flash in the pan brought on by speculation.
Posted by Richard Yeo at 1:37 AM No comments: 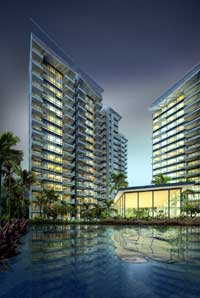 在利息承担计划下，买家付20％的头期，然后在新公寓完工之前，接下来三四年不必支出任何款项。什么样的买家适合申请利息承担计划？申请者又该注意什么？
Posted by Richard Yeo at 1:22 AM No comments:

Chinese Property Hunters Catch On To US Bargains

(Beijing)BEIJING lawyer Ying Guohua is heading to the United States on a shopping trip, looking not for designer clothes or jewellery, but for a US$1 million home in New York City or Los Angeles.

He expects to get a bargain. Mr Ying is part of a growing number of Chinese who are joining tours organised especially for investors who want to take advantage of slumping US real estate prices amid a financial crisis. 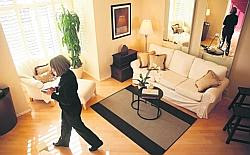 ATTRACTIVE INVESTMENTS - The United States has plenty of unsold homes to offer - some 3.67 million, according to the National Association of Realtors

'It's a great time to buy because of the financial crisis, and houses in large cities like New York and Los Angeles will definitely go up in a few years,' Mr Ying said. The home is an investment, but he's also planning long term: He hopes his five-year-old son might use it if he goes to college in the US.

While China's ultra-rich have been buying property in the US for years, the buying tours are new, made attractive by still-rising Chinese income levels and American real estate prices that have been falling for two and a half years.

More than 100 Chinese buyers have joined such tours since late 2008, according to Chen Hang, the China-born vice-president of real estate at Fortune Group. The Pittsburgh, Pennsylvania, company shows foreclosed commercial property to Chinese buyers. 'The Chinese are going to seize the opportunity to take advantage of some great deals,' Mr Chen said.

Mr Ying, the Beijing lawyer, is one of 40 investors going to New York, California, Boston and Las Vegas on a Feb 24-March 6 tour organised by Beijing-based SouFun Holdings Ltd, a real estate website. SouFun plans to show participants foreclosed properties priced at US$300,000 to US$800,000.

'We never thought these tours would garner such interest, but we've had an overwhelming response,' said SouFun CEO Richard Dai. 'Before, we heard of Chinese or Hong Kong movie stars buying homes in the US, and now more and more Chinese can afford to have the same.'

The home-buying opportunities mirror a larger trend. Cash-rich Chinese companies are looking to buy resources made suddenly cheaper by the downturn or companies suffering under the global debt meltdown. On Thursday, the Aluminum Corp of China, also known as Chinalco and the world's leading aluminium producer, invested US$19.5 billion in debt-burdened global miner Rio Tinto Group - China's biggest overseas investment to date. Because the authoritarian government has imposed controls limiting China's exposure to international capital flows, the country has largely avoided the worst of the global financial crisis.

Meanwhile, high-level incomes have continued to rise. China had the world's fifth-largest population of millionaires in 2008 with 391,000, up 20 per cent from the previous year, according to Boston Consulting Group.

But Chinese with money in the bank have few good investment options at home. Real estate prices have cooled and stock prices peaked in October 2007 after a two-year boom that saw shares rise six-fold in value. After years in which foreign money poured into China to take advantage of the hot economy, economists estimate that tens of billions of dollars began leaving the country in the last three months of 2008 as Chinese investors began bargain-hunting.

Chinese buyers are looking at both commercial property and homes to rent out or use on business trips. And the US has plenty of unsold homes to offer - 3.67 million as of the end of December, according to the National Association of Realtors.

Many buyers are unfamiliar with US markets, so they focus on well-known ethnic Chinese neighbourhoods, according to John Wu, president of the Chinese American Real Estate Professionals Association in San Gabriel, California.

Lion's Property Development Group in New York City organises Chinese groups to visit New York homes. The company also treats visitors to Broadway shows and famous restaurants in hopes that they will take to the city and buy a US$1 million to US$2.5 million home. -- AP
Posted by Richard Yeo at 1:19 AM No comments: