A COFFEE shop in an HDB parking building has sold for a record-breaking $12 million.
The eatery called VariNice is just a stone's throw from the Jurong East MRT and bus interchange. 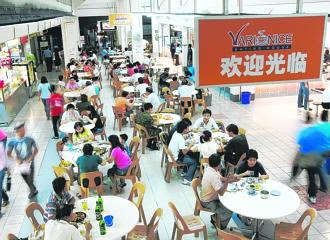 TOP DOLLAR: Bought by foodcourt operator Koufu, the sale price for the 4,700 sq ft VariNice coffee shop in Jurong East works out to $2,553 psf - well above the old record set by a coffee shop in Ang Mo Kio, which sold for $2,225 psf in 2004. -- ST PHOTO: MUGILAN RAJASEGERAN

The eatery - which boasts 12 stalls selling a variety of food from duck rice, to seafood and western food - has been going for about 20 years.

It was sold off by the Government in the 1990sand changed hands again in 2000 for about $10 million.

Its latest buyer is well-known foodcourt operator Koufu, which runs 37 food and beverage outlets across Singapore.

Lianhe Wanbao reported yesterday that Koufu was believed to have paid $13million for the premises, and is collecting $12,000 a month in rent from each stall.

But Koufu founder and managing director Pang Lim told The Straits Times last night that the price tag and rental were less than that. The firm paid about $12 millionand collects monthly rent of $6,000 from each stall.

The payback period for Koufu's latest buy is about 13 to 14 years.

Mr Pang said the deal was its biggest purchase but added that it was a long-term investment.

'It was a high price, but we need good locations and in the longterm, it'll be worth it,' said Mr Pang.

This was especially so as the recent slowdown in residential property has not touched the retail and food and beverage scene.

'This islikely to be few and far between, however,' he added, 'as few shops get transacted at such a high price.'

Three coffee shops - in Tampines, Yishun and BukitBatok - are on the market for $15 million apiece with no takers to date.
Posted by Richard Yeo at 6:24 PM No comments:

The company is also looking to expand to other Indian cities 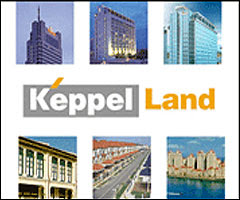 Keppel Land is looking to sell its residential properties in India to Indians based in Singapore, the developer told BT.

'In the past we have not been selling in Singapore. But now - with more Indian professionals coming here to work and live - we have decided to.'

About 300 people visited the company's booth and about 40 of them are 'serious buyers' the developer will follow up with, Mr Ang said.

KepLand is now marketing two projects in India - the 1,573-unit Elita Promenade in Bangalore and the 1,376-unit Elita Garden Vista in Kolkata.

It also has another project - the 1,168-unit Elita Horizon in Bangalore. The project is expected to be launched soon.

At Elita Garden Vista, the company has sold about 60 per cent of the 250 units launched. Prices were 2,600-3,000 rupees psf, Mr Ang said. The project was launched a few months ago.

About 15 per cent of all the units sold at both projects were bought by NRIs, Mr Ang said.

But most of these people are not from Singapore - they are from places such as the US, the UK and Hong Kong.

However, this is set to change as KepLand is seeing more interest among NRIs based here. 'We have an advantage here - they know us and can see the projects we have launched here,' Mr Ang said.

KepLand is upbeat about its future in India, where it has had a presence since 2003. More residential projects are planned there. 'Definitely, we would want to expand,' said Mr Ang.

'Apart from Bangalore and Kolkata we are also looking in Hyderabad, Chennai and the gateway cities of Mumbai and New Delhi.'
Posted by Richard Yeo at 6:23 PM No comments:

Office Occupancy Rates To Stay In The 91-95% Range

Occupancy levels for office space in Singapore will remain in the 91-95 per cent range over the next five years, CB Richard Ellis (CBRE) said in a new report released yesterday.

This reflects a 147 per cent increase from the potential supply of 4.4 million sq ft identified at the beginning of 2007.

And based on projected average annual take-up of 1.6 million sq ft for 2007- 2012, even if full potential supply materialises, 'we anticipate relative equilibrium between supply and take-up over this period', CBRE said.

It said occupancy levels for office space will remain in the 91-95 per cent range over the next five years.

CBRE's report comes as other experts predict that Singapore could see an oversupply of office space going forward.

Citigroup, for example, warned in a report last week that Singapore is in danger of seeing an oversupply of office space from 2010 onwards.

Based on the bank's estimates, occupancy rates are likely to peak in 2008-09 and decline thereafter with the impending supply.

Prime office rents in Singapore averaged $12.60 per square foot per month (psf pm) in the third quarter of 2007, increasing 16.7 per cent quarter-on-quarter and 82.6 per cent year- on-year, CBRE's data shows.

While further rental increases are expected, the pace of growth should ease, CBRE said.
Posted by Richard Yeo at 6:20 PM No comments:

The level of sub-sale activity may be just about half of what it was in 1995 but the value of sub-sale apartments transacted in the first three quarters of this year is already at an all-time annual high of $6.7 billion.

An analysis of data by DTZ Debenham Tie Leung reveals that although the number of sub-sale transactions actually fell to 1,374 in the third quarter of this year - representing a quarter-on-quarter (qoq) decline of 23 per cent - sub-sales made up 19 per cent of the volume, up from 16 per cent in the second quarter.

Equally significant is the fact that median sub-sale prices also hit a new record high of $1,246 psf, a qoq increase of 13.6 per cent and a year-on-year increase of 25 per cent.

But while the level of sub-sale activity can sometimes be an indicator of market bullishness, DTZ executive director Ong Choon Fah points out that factors driving up numbers in the third quarter may have more to do with real demand in the light of short supply and with various new developments becoming available for immediate occupation.

The Icon for instance, has consistently been one of the top two developments in terms of sub-sales this year with its median sub-sale price increasing 26 per cent qoq to $1,495 in Q3. But as Mrs Ong notes, Icon has recently received its temporary occupation permit (TOP), and other attributes like its inner-city location and the affordability of its small units do make it popular.

Another popular development among sub-sellers is The Sail @ Marina Bay which increased 21 per cent qoq in terms of median sub-sale price in Q3 to hit $2,093 psf.

Interestingly, according to DTZ's analysis, the number of units at The Sail and Icon that have been sub-sold is now 512 and 370 units respectively. And assuming that units were not repeatedly sub-sold, DTZ suggests that almost half of the units in these developments have changed hands already.

More telling perhaps is that of the recent launches, only The Lakeshore, which has received TOP for some phases, and One-north Residences registered a significant number of sub-sales.

DTZ believes that while the sub-sale market is increasingly competitive and sub-sale activity is not likely to accelerate further, the overall value of sub-sale apartments in 2007 is expected to increase further, backed by potential price increases.

And foreigners could be helping to boost the sub-sale market. DTZ's report reveals that although the number of foreigners buying sub-sale apartments in Q3 fell by 20 per cent qoq to 460 transactions, this number exceeds that of apartments bought directly from developers.

Indonesians made up 38 per cent of these buyers, followed by Malaysians and Koreans who made up 15 per cent and 9 per cent respectively.

Again, The Sail and Icon proved to be the most popular with these buyers with foreigners buying 26 and 25 units (41 and 36 per cent) respectively in the quarter.

DTZ believes the sub-sale market will continue to receive interest from buyers seeking immediate occupation with some investors looking to realise returns earlier by tapping on the buoyant leasing market. But with the withdrawal of the Deferred Payment Scheme, sub-sale activity may slow and deals look set to be more sustainable.
Posted by Richard Yeo at 6:17 PM No comments:

The Top-10 real estate investment deals in Asia in the third quarter of 2007 amounted to US$9.3 billion, and three of those deals concerned Singapore properties. 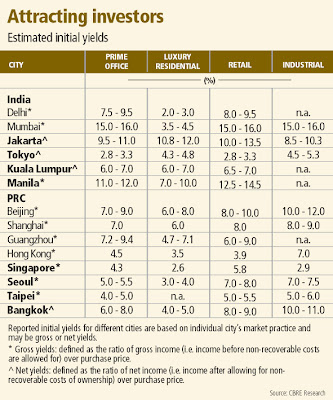 A report by CB Richard Ellis (CBRE) shows that two of the Singapore deals involved stakes in One Raffles Quay while the third involved the sale of Chevron House. The total value of these deals came to US$1.77 billion or about 20 per cent of the value of the Top-10 deals.

As a general guide, investors will look at property yields when shopping for real estate and the 4.3 per cent yield for office property here is competitive with cities like Hong Kong where the yield is 4.5 per cent.

Cities like Manila and Jakarta do offer the potential of higher yields of around 11 per cent but as CBRE executive director Jeremy Lake notes: 'Yields reflect many factors, including risks.'

Mr Lake explains that these 'risks' usually include aspects of a country's legal, political and fiscal policies.

A low-risk/low-yield dictum may not be a bad thing in volatile times.

CBRE notes that some foreign capital is being redirected to Asian property markets, seeking to benefit not merely from the natural appreciation of real estate in dynamic economies, but also from appreciation of Asian currencies against the US dollar, particularly the Chinese renminbi.

Mr Lake also pointed out that investors are drawn to markets where the cost of borrowing is lower than the property yield, explaining why Tokyo saw the largest real estate investment deals in the quarter, with the Top-three commercial real estate deals totalling US$3.95 billion.
Posted by Richard Yeo at 6:13 PM No comments: