Thanks to the mini-buzz created by two new successful launches - Caspian in Jurong and Alexis @ Alexandra - a few developers have decided to release their projects for sale. 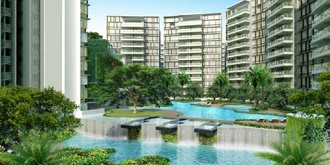 It is an improvement, even if it is just a slight one, from the very sombre mood a month ago, when market watchers were expecting the lull in the market to continue.

Over the weekend, TG Development launched 30 units of the freehold, 102-unit St Patrick's Residences in St Patrick's Road in the East.

On average, prices start at around $675 per sq ft (psf) for a two-bedroom unit and rise to about $900 psf for a four-bedroom penthouse.

The interest absorption scheme, which allows buyers - if they take a loan from the start - to defer making any payments beyond the initial down payment until the project is completed, is offered at a 3 per cent premium.

Marketing agent Savills said the condominium offers quality furnishings and fittings usually associated with prime projects, and that a few units have been sold since the preview a week ago.

Each unit is served by a private lift. Prices start at $648 psf; the average price is $750 psf. This means that the total price per unit should start from just below $1 million.

Unit sizes range from 1,120 sq ft for the two-bedders to 4,187 sq ft for the four-bedders. There are also double-storey penthouses from 2,099 sq ft to 3,757 sq ft. Hiap Hoe is not offering the interest absorption scheme.

Other projects expected this month include Double Bay Residences in Simei, The Arte in Thomson, Domus in Irrawaddy Road and an 18-storey project in River Valley.

These are in the mass- to mid-market categories that, unlike the high-end segment, are still attracting buyers.

New home sales in January had plunged to a new low as developers and buyers kept to the sidelines.

The two new projects that sold very well about two to three weeks ago - Caspian and Alexis - helped revive the market mood to a certain extent.

The Caspian showflat was packed during the preview, when 300 out of 712 units were sold at average prices starting from $580 psf. So far, more than 500 units have been sold.

The 293 Alexis units were all sold at $950 psf to $1,250 psf, but the absolute prices were reasonable, given that most units are small.

At a results briefing last Thursday, City Developments' Kwek Leng Joo cited the good take-up at the two projects as proof that there is still demand.

'The good response to recent launches is true,' he said.

Ms Phylicia Ang, director of Savills Residential, said: 'The affordability threshold is key at this point. In the current market, it is important to price projects at an attractive level to attract buyers.'

The UOL group should start selling the 646-unit Double Bay Residences near the Simei MRT station soon. It declined to give pricing details of the 99-year leasehold condo until the launch, but there is talk that prices will be around $650 psf to $680 psf.

Along Thomson Road, The Arte is expected to be released for preview sale by the middle of the month.

Property agents have advertised the preview of the 336-unit, freehold condo at prices starting at more than $950 psf.

There are also advertisements for the preview of the 18-storey, 67-unit project in River Valley, which offers the interest absorption scheme. It has mostly small units - 32 are 635 sq ft apartments and 30 are 1,044 sq ft units.

A Chinese developer, Lakeview Developments, may also push out its 104-unit Domus this month.

High-end launches will likely be few and far between this year, as current demand is coming only from owner-occupiers or very small investors, according to a developer.

There should be more mass- to mid-market projects coming up in the next few months. These could include projects like the 99-year leasehold Ascentia Sky next to the Redhill MRT station. It offers two- to four-bedroom units from approximately 1,000 sq ft to 1,800 sq ft.
Posted by Richard Yeo at 11:06 PM No comments: 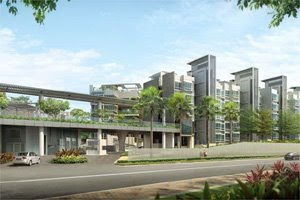 至于位于里峇峇利一带的Mercury@Shanghai Road，据说也会在近两三个星期内推出。这个永久地契项目共有67个单位，推出价格未祥。
Posted by Richard Yeo at 11:01 PM No comments: