PRICES of HDB resale flats have continued to rise even as the economic downturn takes its toll on jobs, wages and private home prices.

But analysts warn this recent steady rise may not last long.

According to flash estimates of HDB's Resale Price Index released yesterday, prices of flats in the fourth quarter of last year rose 1.5 per cent over the preceding quarter.

This figure is considerably lower than the 4.2 per cent increase in the third quarter, and it is the first time that growth has dipped below 3 per cent in six months, said real estate agency PropNex.

But while average prices of HDB resale flats are now at an all-time high, property analysts say that they are likely to dip some time this year.

'Sentiment is pretty soft as many people are taking a wait-and-see approach,' said Mr Eric Cheng, executive director of HSR Property Group. 'If prices dip, they will do so in the second and third quarters of this year.'

'In uncertain times, home buyers go for a 'safer' option - HDB flats - to lessen the financial burden. This is especially so for the 'sandwiched' class that may find private housing a little too stretched for their comfort.'

Mr Nicholas Mak, Knight Frank's director of research and consultancy, said: 'Buyers are increasingly cautious and prefer to purchase HDB flats instead of private homes to limit their exposure to the uncertain market. A number of homeseekers are re-aligning housing requirements from aspirations to functional needs.'

He expects prices to remain flat in the current first quarter, and overall prices to drop 5 to 10 per cent in the full year.

'At the moment, there are still people who need homes. But the economic slowdown and job losses will eventually cause some people to downgrade from larger flats to smaller ones, and only by the second quarter will we start to see a pronounced rate of decline,' he added.

'If the economy does not improve... there will be more downgraders and cautious home buyers in the wake of retrenchments and tighter budgeting. If more people shy away from the bigger flats above the $500,000 mark, it's just a matter of time before prices dip.'

'Clarity will come in the second half of the year. But we should still see overall average growth of between 3 and 5 per cent in 2009.'

What seems certain to decline, however, are cash-over-valuations (COVs).

'The days of transactions with above $50,000 COV are over. Remote exceptions are well-renovated flats with unobstructed, panoramic views,' said ERA's Mr Lim.

Mr Ismail agreed: 'Today, the bigger flats that are valued at $500,000 and above on the resale market can sit without a buyer for two to three months. The en bloc frenzy of last year has already dwindled, affecting the demand for the bigger flats.'

Added Mr Lim: 'We are thus likely to see the COV statistics continue to decline in the coming quarters.'
Posted by Richard Yeo at 11:47 PM No comments:

The fourth quarter's 5.7 per cent drop is the sharpest in a decade

THE deepening economic crisis sent private home prices plunging 5.7 per cent in the fourth quarter of 2008 - the steepest drop in a decade. 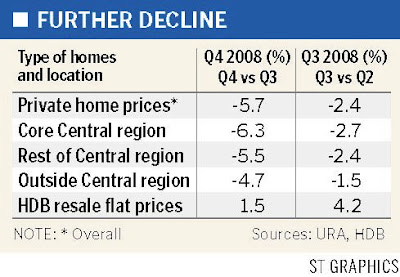 The dramatic fall has effectively brought an end to Singapore's four-year property rally as prices had already dived 2.4 per cent in the previous quarter as jittery buyers flee the market.

Prices for 2008 overall are down 4.3 per cent compared with 2007, according to flash estimates from the Urban Redevelopment Authority (URA) yesterday.

This is a striking turnaround from the 31.2 per cent spike in private home prices in 2007, the peak of the boom.

But Housing Board (HDB) flats continue to buck the trend, climbing 1.5 per cent in the fourth quarter following a 4.2 per cent increase in the third.

This means HDB resale flat prices have reached a new peak since the 1996 high.

Analysts say the gloomy economic outlook has turned home-buyers even more cautious, leading to a fall in demand even as developers begin to soften prices of new launches. Potential buyers are waiting on the sidelines in anticipation of further price cuts, said CBRE Research executive director Li Hiaw Ho.

Prices for apartments in the core central area suffered the most - down 6.3 per cent in the three months to Dec 31, while those in the rest of the central area slipped 5.5 per cent. This follows declines of 2.7 per cent and 2.4 per cent respectively in those areas in the third quarter.

But the falls in some prime projects were even more severe. CBRE's Mr Li said the luxury segment has taken a hammering with projects under construction falling 30 to 35 per cent in prime districts 9 and 10, while those in Marina Bay and Sentosa Cove fell 10 to 13 per cent.

The URA's website showed home prices at Ardmore Park, for example, declining around 30 per cent, from an average of almost $3,000 psf in February to March, to around $2,115 psf in December.

Prices of suburban homes fared better. They were down 4.7 per cent in the fourth quarter, following a 1.5 per cent drop in the previous three months.

ERA Asia Pacific associate director Eugene Lim said prices of such homes have already dipped to 'very reasonable levels, due to recent launches where developers were sensitive to the poor economy'.

Mr Lim also felt that the drop in private home prices - the largest since the last quarter of 1998 - proves that 'fire sales' have started as sellers look to bail out and raise cash amid the recession.

Knight Frank's director of research and consultancy, Mr Nicholas Mak, said the decline of median prices of sub-sales - 10.6 per cent in the third quarter and 7.5 per cent in fourth quarter - confirms this theory, based on his firm's analysis.

The URA recently revealed that about 10,450 unfinished homes were sold under deferred payment, which allows buyers to postpone payments until projects are completed. This has raised concerns that such homes are at risk of default or distressed sales if prices fall more.

The URA and HDB flash estimates were based on transactions in the first 10 weeks of the fourth quarter. They will be updated in four weeks.

The head of research and consultancy at Chesterton Suntec International, Mr Colin Tan, said December's transactions could render the final figure two to three percentage points worse than the estimate.

CB Richard Ellis predicts prices will fall 10 to 15 per cent this year and Knight Frank tips falls of 13 to 20 per cent.

Meanwhile, analysts say that most developers can hold off launches over the short to medium term if necessary.

Yet the market is not short of buyers and investors out for bargains, said ERA's Mr Lim. 'While the immediate future may be bumpy, we are confident there is light at the end of the tunnel.'
Posted by Richard Yeo at 11:41 PM No comments: