Despite the recession, Sentosa Cove is fast taking shape as a prime residential haven. 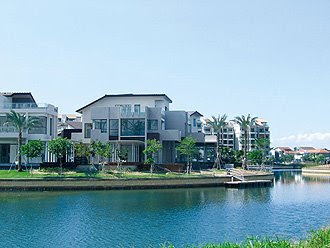 Building at the 117ha site is on schedule, although some developers have asked for extensions. A 12-month extension has been granted to one developer.

By the end of the year, 85 per cent of the projects in North Cove will be ready, while the South Cove, where land sales were completed only last year, will be fully developed by 2014.

The city-state said last October that it will suspend its land sales, putting on hold sites for residential, office and hotel developmentsas the economy deteriorated.

'At the moment, things are still pretty slow,' Mah said in an interview. 'Property really depends on the economy, and the economy around the world and in Singapore still looks pretty weak,' Mr Mah said.

Singapore's economy may contract by as much as 9 per cent this year as the global recession saps demand for the island's exports, the Ministry of Trade and Industry has predicted. The slowdown has pushed residential prices lower for three straight quarters, halting a four-year rally.

'The Government will continue to invest in infrastructure, but the land sales programme will be suspended for the time being,' Mr Mah said. The existingsuspension will last till June and the Government will evaluate and make a decision 'some time in the next month'. he added.

Net profit for the three months ended March 31 fell to S$42.9 million ($28.6 million) from S$247.5 million in the same period last year, the Singapore-based company said in a statement to the local exchange today.

Keppel Land Ltd., a developer building Singapore's largest office complex, said today it plans to sell S$712.3 million of stock to existing shareholders to bolster its balance sheet and fund acquisitions.
Posted by Richard Yeo at 10:05 AM No comments:

BUYERS of resale HDB flats now tend to need much less cash upfront to secure a home - and those looking at bigger flats may need none at all.

Data released yesterday by the HDB showed first-quarter median cash-over-valuation levels fell substantially to $4,000 in the first quarter, from $15,000 in the previous quarter. 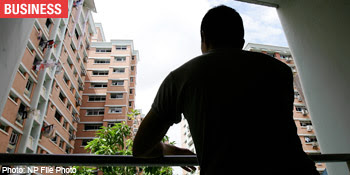 This refers to the sum that flat buyers pay above a valuation set by HDB-appointed private valuers. Buyers can use Central Provident Fund money for any sum up to this level but need cash for any more.

The significant fall is attributable to twin factors - falling resale flat prices in a deteriorating economy and higher valuation levels, after a run-up in prices over the past year or so before recent falls.

HDB resale flats fell 0.8 per cent in the first quarter, just over the initial estimate of 0.6 per cent, after prices peaked late last year. However, resale prices are still at healthy levels, about 2 per cent above the 1996 peak, said Knight Frank's director of consultancy and research Nicholas Mak. 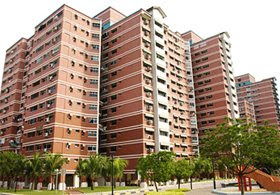 Higher HDB valuations are why resale HDB prices dipped only slightly despite a far lower cash portion, said PropNex chief executive Mohamed Ismail. 'It is evident that public housing remains resilient in this gloomy economy, thanks to continued strong demand for resale flats. The alternatives, Build-To-Order and Design, Build and Sell Scheme projects, are still years away from completion.'

But things may change. 'Generally, though valuations are still high, banks are becoming more conservative and there have been cases where buyers are offered only 70 per cent loans instead of the usual 80 per cent,' said ERA Asia Pacific's associate director, Mr Eugene Lim. That means more higher-value HDB resale flats are now being sold below valuation - in some cases, perhaps, up to $30,000 to $50,000 below, he said.

'For larger flats, the days of transactions with cash-over-valuation are over,' adds Mr Lim.

ERA's first-quarter resale HDB deals show 21 per cent of flats sold below valuation, 19 per cent at valuation. Of the rest, most fetched no more than $15,000 cash, said Mr Lim.

First-quarter median sublet rents were unchanged for the smaller flats, and down $100 to $200 for the four-room and larger flats.

They expect increased demand for smaller flats as home buyers exercise prudence. 'In the coming quarters, we are likely to see more and more larger flats sold at or below valuation as the harsh economic conditions hit home,' said Mr Lim.

The good news is that the fall in HDB resale prices is not expected to dent upgrader demand for private homes as the rate at which HDB resale flat prices are falling is still less than that of private homes, Mr Mak said.
Posted by Richard Yeo at 8:40 AM No comments:

The first quarter sees a 14.1% fall; rents continue to slide as well, and at a faster rate

PRICES of private homes fell off a cliff in the first quarter, continuing a dramatic slide that has now wiped out the gains owners have made since 2007.

Values dived 14.1 per cent in the first three months this year - the biggest fall on record - and followed a 6.1 per cent slide in the last quarter of last year. 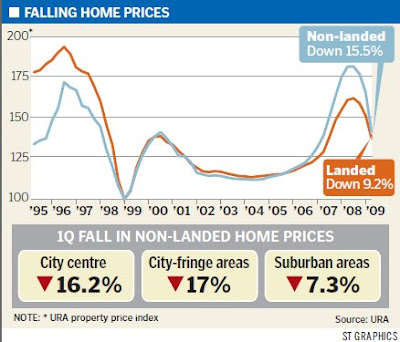 Figures from the Urban Redevelopment Authority (URA) yesterday also point to pain in the residential rent market and in the office sector.

But the plight of the private home sector caught most attention. The first-quarter fall was worse than an initial URA estimate of 13.8 per cent, indicating the slide accelerated towards the end of the quarter.

The souring of the market has been fast and furious. Prices had been rising for four years and were still going north until as late as September of last year but then the rot set in.

Price declines have been registered in three consecutive quarters with the fall in the first three months of this year the worst since the URA began keeping data in 1975. Private homes on the city fringes suffered the most, with prices down 17 per cent, compared with 16.2 per cent in the city centre and 7.3 per cent for suburban residences. 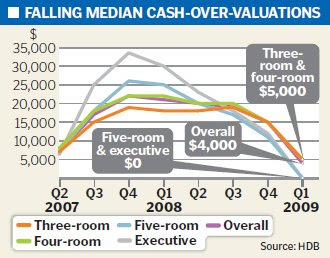 The hefty gains over the past two years have been erased, so owners who bought after the first quarter of 2007 could see their home's valuation fall below the purchase price, said Colliers International's director for research and advisory, Ms Tay Huey Ying.

Rents for private homes also kept falling and at a faster rate. They plunged 8.5 per cent in the first quarter compared with a 5.3 per cent decline in the last three months of 2008. Rents of non-landed prime homes fell the most, at 10.3 per cent.

HDB resale flats showed more resilience with prices inching lower by just 0.8 per cent in the first quarter - the first fall since the third quarter of 2006.

But there was a sliver of good news. Sales of new homes in the first quarter were a robust 2,596 units, driven by pent-up demand, price cuts and innovative product packaging, experts said.

The mass market sector was most active with upgraders picking up many units to help lessen the rate of price fall in suburban areas, said Knight Frank consultancy and research director Nicholas Mak. Developer sales in suburban areas reached 1,637 units in the first quarter, almost as many as were sold last year, he said.

But the prime market accounted for only a meagre 9.5 per cent of all developer sales. And sales in the resale and sub-sale markets remained weak.

'Property really depends on the economy, and the economy around the world and in Singapore still looks pretty weak.' National Development Minister Mah Bow Tan told Bloomberg in Vietnam yesterday.

Mr Mak expects private home prices and rents to contract sharply in the first half of the year but the rate of decline will decelerate.

Singapore's office market also took a beating in the first quarter. Rents slid 10.7 per cent, the biggest fall since the first quarter of 1992, while prices fell 12 per cent. Take-up contracted for the second consecutive quarter and for the first time since late 2006, the islandwide vacancy rate hit 10 per cent.
Posted by Richard Yeo at 8:36 AM No comments: