THE Housing and Development Board (HDB) began inviting tenders yesterday for a land parcel in Sengkang New Town for the building and managing of a market and food centre. The land parcel has a site area of 6,000 square metres and a maximum gross floor area of 4,000 sq m.

The tenure is for an initial five years with options for another two terms. The development will house an estimated 100 stalls offering fresh market produce and cooked food, as well as parking lots and a drop-off porch.

The tender arose from the Forum on HDB Heartware, which among other things, recommended the building of wet markets and hawker centres to promote community bonding and strengthen local identity. Sengkang was chosen for the pilot project as it is a new town and many requests have been made for another market and food centre.

Despite the dismal economic climate, Nicholas Mak, Knight Frank's director of research and consultancy, expects the response to be positive. 'The Sengkang area is a growing estate housing about 140,000 people at the moment and the location of the market is quite attractive as well, with it being surrounded by high-density flats and quite near the MRT,' he said, adding that the project would most likely be taken on by a contractor that frequently works with the HDB.

LONDON - HOUSE prices in Britain will fall 10 per cent next year as banks rein in lending and buyers are deterred by the economic slowdown, a leading surveyors' group forecast on Wednesday.

The Royal Institution of Chartered Surveyors said the fall would bring house prices, which have roughly tripled over the last decade, down to at least 25 per cent below their summer 2007 peak.

'Lenders are likely to remain cautious,' said Simon Rubinsohn, the group's chief economist. 'This, coupled with an increasingly gloomy economic picture, suggests that house prices will continue to decline in 2009.'

However, the surveyors' group said the volume of sales would probably increase by 10 per cent next year, after plunging to a 30-year low in November, as government programs to increase the availability of affordable mortgages begin to take effect.

The group's 2009 house price forecast echoes the one that Hometrack property researchers published on Monday, which also predicted that house prices will fall by 10 per cent next year.

Several other leading British research groups - Nationwide and the Council of Mortgage Lenders - have decided not to publish house price estimates for 2009 because of market volatility. -- AP
Posted by Richard Yeo at 9:49 PM No comments: 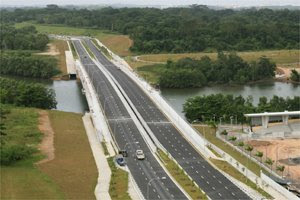 如果这些建筑受邻近地震影响，传感系统会记录晃动情况，立刻把数据通过简讯方式发给工程师。目前，传感器感应到的振动强度不足以影响本地高楼安全。
Posted by Richard Yeo at 9:46 PM No comments:

报道说，专家表示，今年以来房地产市场持续低迷一个基本的因素是部分城市房价上涨过快，并透支了未来房价上涨空间，市场虽然有刚性需要，但普通购房者已不具备住房消费能力。
Posted by Richard Yeo at 9:45 PM No comments: