Observers say more en-bloc sales are on the cards as a result of improved sentiment and rising demand for land. 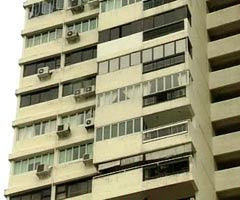 One market player, Credo Real Estate - a leader in the collective sales market - said at a seminar on Thursday that it expects five to 10 cases in the next few months, with more to follow in 2010.

The seminar on en-bloc property sale was Credo's second in a week on the back of rising enquiries. Representatives from about 18 residential developments attended the seminar.

In the last two months, Credo received 10 calls about potential collective sales. There were also existing clients hoping to re-initiate the sales process.

Among them was the 528-unit Laguna Park in the east, which could be launched for collective sale next month.

Observers say the project is likely to attract consortiums rather than individual developers, given the scale of the development and its S$1.2 billion price tag.

Credo said that with the current conditions, owners should lower their asking price by 20 to 25 per cent, compared to prices during the boom time in 2007.

Karamjit Singh, managing director of Credo Real Estate, said: "But that gap can also quickly narrow if the pace of recovery picks up because where the outlook remains positive and end unit prices move up 10 per cent, land values move up even more than 10 per cent - there is an exponential effect at the pace which land values rise."

The company said it expects 30 to 40 en-bloc transactions next year, comprising mainly small and medium sized projects. For 2011, it projects about 18 collective sales deal will go through. This pales in comparison to the 87 residential property transactions done in 2007.

The failed sale of Horizon Towers and new rules on the conduct of sales committees and transparency of sale process will also affect transaction volume.

Industry players say the additional requirements will mean that potential en-bloc projects will take a longer time to hit the market.

The cost of putting a project on sale will also increase, given higher administrative costs and legal fees. -- CNA/yb
Posted by Richard Yeo at 3:20 AM No comments:

1.5m Homes In US Face Foreclosure

WASHINGTON: The number of Americans on the verge of losing their homes soared to a record in the first half of this year as more lost their jobs and were unable to pay their monthly mortgage bills.

More than 1.5 million properties received a default or auction notice or were seized by banks in the period, according to a report released yesterday by foreclosure listing service RealtyTrac.

Despite the Obama administration's plan to encourage the lending industry to prevent foreclosures by handing out US$50 billion (S$73 billion) in subsidies, US housing woes continue to spread.

Experts do not expect foreclosures to peak until the middle of next year.

As many as 3.2 million households will get a foreclosure filing by the end of the year, said RealtyTrac's senior vice-president Rick Sharga.

Payment-option adjustable rate mortgages will contribute to higher defaults, he added. The option allows borrowers to pay less than the interest they owe each month, tacking on the difference to their total debt and creating the potential for bigger bills in the future.

About three-quarters of those loans will adjust to require higher payments next year and in 2011, with the peak coming in August 2011 when about 54,000 loans recast, according to data from First American CoreLogic.

Last month, as home prices continued to fall, foreclosure filings rose 5 per cent from May and 33 per cent from a year earlier. June's foreclosure activity was the third-highest on record, and the fourth straight month of filings on more than 300,000 properties.

At the Federal Reserve's June meeting, central bankers were less certain than they were in April over how the US economy will emerge from the recession.

Policymakers have differing assessments of how quickly credit markets will heal, and how effective a US$787 billion fiscal stimulus and US$1 trillion expansion of the Fed's balance sheet will be, according to the Federal Open Market Committee minutes released on Wednesday.

The range of projections for 2010 growth showed a gap of 3.2 percentage points, up from a 2.5 percentage point divide in April. The lowest forecast suggests the economy will grow just 0.8 per cent from this year's fourth quarter to the final quarter of 2010; the highest projects 4 per cent growth.

'The wide array of estimates...suggests that we really don't know how this economy is going to unfold in the coming months, let alone two years from now,' said Mr Richard Yamarone, head of economic research for Argus Research Corp. -ASSOCIATED PRESS, BLOOMBERG, REUTERS
Posted by Richard Yeo at 12:04 AM No comments:

Collective Sales To Trickle Back Into Market, Says Credo

PROPERTY consultancy firm Credo Real Estate expects collective sales to resurface this year or next, but not with the same intensity as in the boom years of 2006 and 2007.

Some 5-10 collective sales may happen this year, said Credo's managing director Karamjit Singh. But they will probably involve small to mid-sized sites, as these tend to reach the market faster, he added.

This week, 72-unit Dragon Mansion became the first property launched for collective sale this year. There were more than 100 such transactions in 2007.

The outlook for 2010 is brighter, when some 30-40 estates may be sold en bloc, said Mr Singh. A collective sale is financially feasible when the land value exceeds the total value of individual units in the open market. Right now, this situation has yet to occur for most estates, he explained.

But even when the collective sale market picks up, it is unlikely to rebound to earlier levels. Owners may also have to trim their price expectations 20-25 per cent from peak levels, according to Mr Singh.

Owners may start asking for more if recovery in the property market accelerates, he said. Since February, private home sales have been buoyant, leading to greater optimism in the industry. Developers sold 1,825 new units in June - more than double the number sold a year ago.

As more stock is cleared, developers will want to replenish their land banks and that will drive collective sales, said Mr Singh. According to him, small developers in particular have started looking for smaller sites.

Calmer markets today are less likely to create contention in collective sales, much of which arose because of steep increases in land values, he said.

But new challenges have emerged. For instance, new legislation governing such deals may make it costlier and more time-consuming for estates to reach the market. Also, fewer owners may volunteer to join sale committees now that the law has spelt out their responsibilities clearly.
Posted by Richard Yeo at 12:02 AM No comments:

FRASERS Hospitality yesterday launched Modena - a new line of service residences which cater to a budget-conscious and highly mobile group of business travellers. 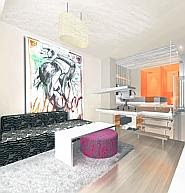 Home away from home: The Modena line of service apartments cater to a budget-conscious and highly mobile group of business travellers

Room rates at Modena will be around 20 per cent lower than those at properties under the existing Fraser brands. Some 1,000 apartments across five Modena properties will come on-stream in the next three years.

The launch is timely 'because companies are really looking at cost-cutting measures' and Modena will be 'a lot more palatable' for them, said Frasers Hospitality CEO Choe Peng Sum, who was in Tianjin, China yesterday to launch the brand. He heads the hospitality arm of Frasers Centrepoint, which is part of local conglomerate Fraser and Neave.

Apartments at Modena will be smaller than those under the Fraser brands. But Modena properties will have various facilities catering to 'road warriors' on the go, such as lobbies supplied with food and groceries, and 24-hour play rooms with gymnasiums and electronic game machines.

The first Modena property, with 272 units, will open its doors in Tianjin towards the end of this year or early next year. The second will be in Shanghai and another two will be in Suzhou. Frasers Hospitality will run them through management contracts.

The fifth Modena property - and also the flagship - will be ready in Singapore's Changi Business Park in Q1 2012. Frasers Hospitality will own and manage the 300-unit Modena Singapore, which is under construction at a cost of $124 million.

Guests could come from the business park, Singapore Expo and the fourth university which is under development at Changi.

Modena Singapore will be part of a 4.7 ha integrated business and lifestyle development - a $500 million joint venture between Frasers Centrepoint and Ascendas.

The economic downturn has not curbed Frasers Hospitality's ambitions for Modena. Negotiations are underway to expand the brand in Asia and Europe, and countries that it is interested in include India, France, the UK and Qatar.

'In this economic downturn, we have a very contrarian view - we see this as an opportunity for step-up,' said Mr Choe. Modena for instance, may appeal to companies tightening their budgets, he explained.

Nonetheless, the picture for the service residences industry is not all rosy. In China and Singapore for instance, the economic downturn has pushed rates at Frasers Hospitality's apartments down by 15-20 per cent. Occupancy rates have remained relatively stable, in the 80-90 per cent range.

Frasers Hospitality has also shelved plans to set up a real estate investment trust for 'a few years' until the 'market is a lot more conducive', Mr Choe said. For similar reasons, it has postponed plans to set up private equity funds to invest in service residences.
Posted by Richard Yeo at 12:00 AM No comments: