Where do you see this?

Mainly when a plot of land that is already built on is sold to be redeveloped, such as in a collective sale of an existing estate.

What does it mean?

When a developer buys a site for redevelopment, it will submit a proposal to the Government to build a new development on the land that will have a higher value.

If the Government approves this proposal, it will tax the developer on the enhancement in the value of the land plot resulting from this redevelopment.

This tax is the development charge.

Why is it important?

The development charge that is levied on a plot of land affects how much the developer is willing to pay for it.

Also, the Government revises the development charge every six months - in March and September - to bring them in line with recent transacted land prices. The revised development charge is seen as a reflection of how much land costs have gone up or down in the last six months.

So you want to use the term? Just say...

'If a developer tears down this small condo and builds a high-rise one in its place, it will probably have to pay a high development charge.'
Posted by Richard Yeo at 7:18 PM No comments:

Panic selling of homes unlikely this year and next as investors sitting on comfortable profits are in no hurry to exit market, say analysts

The panic selling of homes that some property experts had forecast months ago has not materialised after all - not this year, anyway.

Market watchers had previously warned that the negative sentiment in the property market - which stemmed from the United States sub-prime crisis late last year and persists still - might prompt property investors to offload their uncompleted units at fire-sale prices and drive home prices down. 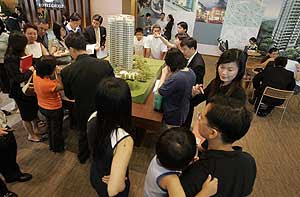 But a recent analysis by Savills Singapore found that almost everyone who sold a private apartment or condominium unit in the sub-sale market in the first seven months of this year pocketed robust gains.

This implies that, for this year at least, property investors are still sitting on comfortable profits and are likely to be in no hurry to exit their investments, said Savills' director of business development and marketing, Mr Ku Swee Yong.

'The cost of holding on to properties is quite low right now because of low interest rates, so for those who haven't already exited the market, there's no urgency to sell,' he added.

When an individual buys an uncompleted property and resells it before it has been built, the transaction is called a sub-sale. Such sales are often used to measure property speculation, since sub-sale sellers are often short-term investors who never intended to occupy their units.

Savills' data, first published in the Business Times last Tuesday, showed that 97 per cent of sub-sale sellers this year have cashed out at a profit. On average, they reaped $417,563 per unit, or a 36.5 per cent gain.

Property consultants say this comes as little surprise, as many of the units that were sub-sold this year were in developments that were launched in 2006 or even earlier, at relatively low prices that allowed plenty of room for price gains.

Citylights in Jellicoe Road, for instance, which saw the most number of sub-sales this year, was first launched in December 2004 at an average price of $590 per sq ft (psf). Up till the development was completed earlier this year, units changed hands at steadily rising prices, topping out at $1,200 to $1,300 psf.

But while the private housing market may be spared the carnage of selling hysteria this year and even next year, some industry players caution that 2010 may be a different scenario.

The projects that will be completed then were mostly launched during the peak of the market last year and this year. Buyers bought high and are likely to register losses if they want out of their investments, experts say.

Generally, there is a rush to offload units right before a project's completion, as that is when more payment instalments are due.

So come 2010, if prices stay soft and the economy has not made a spectacular recovery from the current slowdown, buyers might start to feel a greater urgency to sell their properties and the market might be flooded with these 'expensive apartments', said Wing Tai chairman Cheng Wai Keung last week.

Mr Colin Tan, associate director of Chesterton International, added that investors who have cashed out by now are the experienced ones, while 'it is the novice investors who are usually left holding on to their units' and may be more prone to panic selling later.

Already, the profits that were reaped by sub-sellers this year have dwindled according to how recently they bought their units, consultants noted.

Those who made the original purchase in 2004 and 2005 gained more than $600,000 each on average, while those who bought their units last year made only $230,000 on average, according to Savills' data. Investors who bought and sold within this year reaped only about $175,000 on average.

Part of this is due to the general principle that the longer you hold a property investment, the greater the gains will be, said Dr Chua Yang Liang, head of South-east Asia research at Jones Lang LaSalle.

However, a large part of the difference in gains also arose from the huge run-up in prices over the last two years. This spectacular growth is unlikely to be repeated, removing a cushion from investors still hoping to resell their units before completion in 2010 and beyond.

But a glimmer of hope for the property market lies in the healthy profits that investors have made so far this year.

Savills estimates that punters took home a total of $350 million in profits alone from sub-sales in the first seven months of this year. While consultants think it is unlikely that all the money has already been ploughed back into property, they expect it to return to the market eventually, which may help to prop up prices.

However, Chesterton's Mr Tan believes this will happen only when current prices soften enough to attract investors again.

'Properties are not like shares - you cannot come in and out even as prices decline,' he said. 'To lessen your risk, you come in only when you think prices have bottomed out or are at sustainable levels.'
Posted by Richard Yeo at 9:27 AM No comments: