HSBC is offering customers of its declining-rate-spread home loans who sell their houses a chance to continue benefiting from lower interest rate spreads, if they take out a new loan with the bank.

The latest tweak to its variable-rate mortgage offering is aimed at persuading customers to stay with the bank, even if they sell their home and redeem their existing loan.

HSBC charges customers of its Sibor-pegged home loans the three-month Singapore interbank offered rate or Sibor, plus an extra margin or spread that declines after the first year.

In March this year the bank launched a new 'relationship-based' home loan package that charged a spread that started at 1.5 percentage points above Sibor in the first year, then declined by 0.075 point each year until the 10th year, when the spread fell to zero, before rising again to 1.2 points subsequently.

Since then, the spreads have been revised. They now start at 1.2 points in the first year and fall by 0.1 point each year until they reach 0.8 point, where the level stays until the ninth year. The spread then falls to zero in the 10th year, and rises to 1.3 points subsequently. Sebastian Arcuri, head of personal financial services at HSBC, said the response to both packages has been 'extremely positive', with three-quarters of the bank's home loan customers choosing one of the two, instead of fixed-rate loans.

With the latest 'portability' feature, customers who sells their home and redeem their mortgage early - say, in the third year - and takes out another Sibor-pegged home loan with HSBC for a new property will pay the same spreads as before on the redeemed loan amount, instead of starting at the top rate. If the Sibor rises significantly, however, the overall interest rate paid by a borrower may still increase from one year to the next.

Mr Arcuri said the feature will help customers save on interest. 'With loan portability, our customers can enjoy the freedom and flexibility to redeem their loan, buy a new home and still benefit from a lower interest rate spread on their home loan year on year,' he said.

To qualify for the rate-spread discounts and the portability feature, customers must keep at least $100,000 in deposits, investments or insurance with HSBC.
Posted by Richard Yeo at 12:02 AM No comments:

Fragrance To Launch At Least 6 More Home Projects In H2

FRAGRANCE Group says it intends to launch at least another six residential projects with about 480 units in the second half of this year. 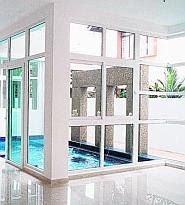 It said this in its latest financial results statement, which showed it posted an 11.4 per cent year-on-year increase in net profit for the second quarter ended June 30 to $17.7 million. Turnover rose 33.1 per cent to $79.5 million.

For the first half, the group's net earnings slipped 8.9 per cent year- on-year to $27.8 million despite a 15.5 per cent improvement in turnover to $130.3 million. The lower bottom line was partly due to lower profit margins by the property development business as a result of lower selling prices.

The group generated a positive cash flow from operations of $53.6 million during the first half of 2009. This arose mainly from the projects that were sold and completed during the period.

These proceeds were used to settle the borrowings pertaining to the sold and completed projects as well as purchase of property, plant and equipment.
Posted by Richard Yeo at 12:00 AM No comments: