Coastal cities in mainland China have had the steepest downturns

(GUANGZHOU) China has joined the United States, Britain, Spain and others on the list of nations suffering a real estate decline.

Although the last national statistics showed single- digit growth from July 2007 to July 2008 in the average price of commercial and residential real estate, real estate brokers say prices are down from peaks reached earlier this year, while the number of transactions has plunged.

This downturn comes as the growth rate of Chinese exports has slowed - sharply in yuan terms - and stock markets have plummeted.

The confluence of events has resulted in what economists describe as a deceleration in China's economic growth - although at nearly 10 per cent it remains the envy of many nations.

Brokers say that sales volumes first dropped precipitously here in southeastern China, and then the decline spread across the country.

In some neighbourhoods in the southeast, prices have dropped by 10 to 40 per cent.

In other parts of the country, transactions have fallen, but prices have only started to follow.

For instance, the number of home sales has plunged by two-thirds in Harbin in the northeast, though prices are down as little as 4 per cent from the same period last year.

'People are thinking more carefully and taking much longer before they decide to buy or not to buy property,' said Hwang Sha, a real estate broker in Xiamen in east-central China.

Cities deep in China's interior are least affected. Dan Yian, a real estate agent in Chongqing, the largest city in southwestern China, said that the volume of housing transactions there had slowed by 20 to 30 per cent so far this year.

But prices have not yet fallen from a stable level of US$730 a square metre, which works out to nearly US$66,000 for a typical apartment of about 970 square feet.

Export-dependent coastal cities in mainland China have had the steepest downturns in their real estate markets.

Some of those problems are starting to make ripples elsewhere in Asia.

Freddy Wu, the chief executive of Hong Kong Property Services, said his real estate agency had seen mainland investors default in recent months on a tenth of their purchases of Hong Kong apartments, forfeiting the down payments that they made.

'A lot of investors from China have their cash tied up in the mainland stock market and in mainland real estate, so they would rather take a loss now', instead of being forced to sell mainland investments at a loss to come up with the cash to complete purchases in Hong Kong, Mr Wu said.

Growth in imports and in fixed-asset investments slowed. Inflation dropped sharply at the consumer level, to 4.9 per cent in August from 6.3 per cent in July.

But unlike the sub- prime meltdown in the United States, and the resulting credit crisis, weaknesses in China's real estate market do not, at this point, appear to pose a threat to the vitality or stability of the financial system.

One reason is that Chinese banks require down payments of at least 30 per cent, giving banks an ample cushion of cash against losses.

American banks frequently did not require down payments. Foreclosures are also rare here, and many Chinese still pay cash for their homes, particularly in rural areas.

Leo Wah, a Chinese banking analyst for Moody's, said that Chinese banks could weather the decline in real estate prices, but cautioned that they could face more challenges if economic troubles spread. - NYT
Posted by Richard Yeo at 7:46 PM No comments: 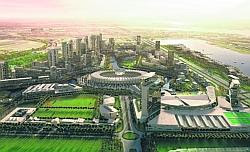 Grand: Rihan Heights is part of an integrated development called Arzanah that will comprise about 9,000 homes, leisure and sports facilities

The phase, called Rihan Heights, is a residential development comprising 14 villas and 854 condominium units on a site of about 38,000 sq metres. CapitaLand could not give any price indication yesterday.

Arzanah, estimated to cost about US$5-6 billion to develop, is being developed by Capitala, a 49:51 joint venture between CapitaLand and Mubadala, an investment and development vehicle set up and wholly owned by the Abu Dhabi government.

The 854 condo units at Rihan Heights include one to three-bedroom apartments and penthouses. An exclusive invitation to buy has been extended to all UAE nationals who registered interest at the Capitala stand during the Cityscape exhibition in Abu Dhabi earlier this year.

Capitala's acting CEO Wong Heang Fine said: 'Not only are we offering our first phase and starting to build long-term relationships with our buyers, we are doing so with construction already underway and progressing ahead of schedule, and with mortgage finance offered to our buyers through First Gulf Bank.'
Posted by Richard Yeo at 7:43 PM No comments:

GLOBAL financial market turbulence will persist despite the US government taking over mortgage giants Fannie Mae and Freddie Mac, a former US Treasury official warned yesterday. 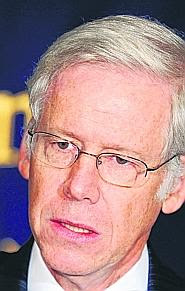 Charles Dallara, now managing director of the Washington-based Institute of International Finance (IIF), said the credit squeeze will tighten, leading to a 'period of extended malaise in major economies and slower growth in emerging economies'.

Speaking in Tokyo, he lambasted banks, underwriters, ratings agencies and other financial institutions for bringing about the US sub-prime mortgage crisis and consequent financial sector meltdown. But he praised their subsequent efforts to clean up the mess by cooperating with an IIF move to introduce new principles of conduct for the financial sector.

Mr Dallara said the IIF, whose members include more than 380 of the world's top financial institutions, is setting up a 'markets monitoring group', comprising leading banks and other institutions, to try to forestall future financial system crises. The group will meet periodically to check whether asset prices are moving out of line with economic fundamentals and to look for other signs of systemic stress, he said.

Thirteen months after the outbreak of the sub-prime crisis, 'I cannot say that market turbulence is behind us', Mr Dallara told the Foreign Correspondents Club of Japan. He warned of 'stress ahead' as financial institutions in the US and Europe continue to 'shrink their balance sheets' and struggle to raise capital in an 'extremely difficult environment'.

There has been a 'generalised breakdown in discipline in credit risk assessment and underwriting practices', he said. 'Bankers took their eyes off the ball, credit rating agencies did not do their job' and investors were guilty of similar laxity. Credit tightening has now spread from mortgages market to areas such as auto loans and credit cards, he noted.

One of the most pernicious effects has been that capital-starved banks in North America and Europe have become risk-averse and are unwilling to lend even to sound business borrowers, he said.

An extended slowdown can therefore be expected in the world's major economies for two to three years. And emerging market growth in Asia and elsewhere will inevitably slow as a result.

Mr Dallara said Japanese banks are in relatively good shape because of their limited exposure to the sub-prime fallout. They have begun to rebuild foreign lending and could pursue loans growth overseas, as well as mergers and acquisitions involving distressed foreign financial institutions.

The IIF managing director is holding meetings in Japan and South Korea with senior government officials and heads of financial institutions to gather support for compliance with principles of conduct and best-practice recommendations drawn up by 60 leading financial firms over nine months in the aftermath of the sub-prime crisis.
Posted by Richard Yeo at 7:40 PM No comments:

Foreign Workers Prefer To Stay Away From Residential Estates 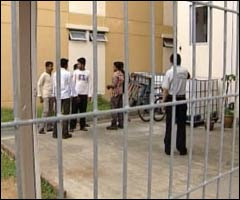 Singaporeans who do not want foreign workers living near them cite security concerns and even a downgrade in their property value as reasons.

But are these fears rational? Some foreign workers welfare groups said it is simply a fear of the unknown. That is why they are advocating that foreign workers be integrated with the wider community through a more structured orientation programme.

"I think community centres are a good start. If they are able to do social activities that can involve both migrant workers along with its local community, either through festivals or through sports activities or National Day Parade, it's a good opportunity to bring the two groups together," said Sha Najak, helpline manager at Transient Workers Count Too.

She added that current orientation roadshows may be a little too top-down in approach. 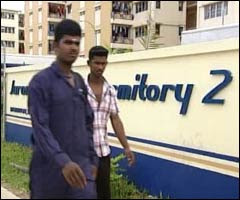 "But some foreign workers said they are quite happy to live among themselves, away from housing estates.

"Wherever the dormitories, if it is away from the residents, it's better because when it's very near to the residents' area, the workers have to go to the same FairPrice supermarket, or ... canteen, they might misunderstand each other," said Keve Xavier, a foreign worker.

But others said they would like to get to know Singaporeans better to ease misunderstandings.

Really, we feel shame too (when) the people go and disrupt everybody, and nobody likes to stay with those people," said Nathan Neduzcheliyan, also a foreign worker.

"We want to establish a good relationship between the Singaporeans and workers," said foreign worker Humayun Kabeer.

Responding to Channel NewsAsia, the People's Association said some grassroots organisations have engaged foreign workers through ad-hoc programmes aimed at helping them integrate into the community.

The government has said that more Singaporeans will find themselves living in the midst of foreign workers as Singapore expands.

While no solution has been reached yet for residents of Serangoon Gardens, the National Development Ministry is looking into the issue and is expected to respond soon. - CNA /ls
Posted by Richard Yeo at 4:43 PM No comments:

MOST developers are still holding off launching luxury condominiums, but a few projects are slowly being put on the market.

Frasers Centrepoint has launched and sold about 30 units at its 302-unit Martin Place Residences, with apartments going for about $1,800 per square foot (psf) on average.

Martin Place Residences is in the River Valley neighbourhood in District 9.

And nearby, SC Global Developments said last week it had released and sold 30 apartments in its Martin No 38, which has 91 units in total.

Developers are pushing out luxury condo projects cautiously, with most releasing them in small phases.

Many are also trying to test the market to see if their high-end homes will sell and gauge how much buyers will be willing to pay.

Yesterday, the en-bloc purchasers of Lincoln Lodge said they will be launching the new development on the site - Lincoln Suites - by early next year.

But the developers - Koh Brothers, Heeton Holdings, KSH Holdings and Lian Beng Group, which each have an equal stake in the project - will only release some of the project's 175 units in the first phase.

And current residents of Lincoln Lodge will probably be allowed to stay in their homes well into next year.

'We are not going to launch all the units at one go,' said Francis Koh, chief executive of Koh Brothers. 'The price will be determined by buyers' willingness to buy.'

Prices will be similar to or 'even lower than' comparable projects nearby, Mr Koh said.

Units in the newly-built nearby development, Park Infinia at Wee Nam, are going for $1,300-$1,600, property consultants said.

The consortium bought Lincoln Lodge for $243 million, or $1,449 psf per plot ratio, including an estimated development charge of $413,000, in June last year at the height of the en bloc frenzy.

They then decided to hold off tearing down the existing project, and have instead allowed occupants to keep renting apartments for at least six months from the sale completion date in July this year.

Now, the showflat for Lincoln Suites will be built with Lincoln Lodge still standing.

Depending on the market response, the leases of the tenants could be extended past January next year.
Posted by Richard Yeo at 4:37 PM No comments: 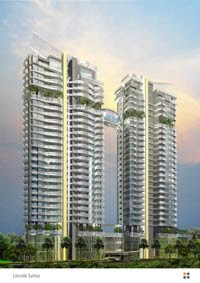 新项目取名为“龙之居”（Lincoln Suites），在设计上也将出现独特的“龙角”造型。
Posted by Richard Yeo at 4:30 PM No comments:

至于有消息指环球金融业不景气，将会打击香港豪宅市场，谢伟铨反驳，从事金融业的高层对住宅有一定要求，加上早前针对从事金融业的豪宅盘销情不俗，因此有理由相信香港豪宅市场不会受金融风暴打击。
Posted by Richard Yeo at 4:29 PM No comments: 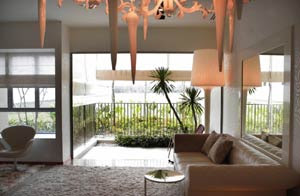 他说：“由于建筑师有压力必须包括这类设施来增加可出售的楼面，目前几乎所有的新项目都有凸窗和植物槽的设计。政府取消这个规则不但能重新让建筑师发挥创意，而且能鼓励建设节能的绿色公寓。”
Posted by Richard Yeo at 4:26 PM No comments: