Private Home Sales Up 11 Times To 1,323 Units In February

Sales of private homes shot up by over 11 times in February, with 1,323 deals done compared to the previous month. 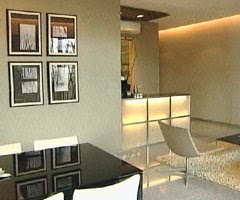 Latest monthly figures released by the Urban Redevelopment Authority (URA) showed that the increase was largely driven by strong sales from properties like The Caspian, The Alexis and The Quartz.

In all, 978 units changed hands in the three developments which are located in the suburban areas of Alexandra Road, Boon Lay Way and Buangkok Drive.

Developers also placed more units for sale in February, fuelling the spike in demand. They launched 1,069 units, compared to just 204 units in January. - CNA/so
Posted by Richard Yeo at 12:17 AM No comments:

Singapore's economy could shrink by 8.5 per cent in the first three months of 2009, hit by a downturn in trade, and its currency could lose about 8 per cent against the US dollar this year, a Monetary Authority of Singapore survey showed. 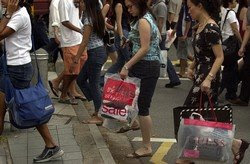 Growth would pick up later in the year and narrow the contraction to 4.9 per cent for the whole of 2009, the survey showed. Gross domestic product contracted 4.2 per cent in the fourth quarter of 2008.

Standard Chartered economist Alvin Liew said the 8.5 per cent projected contraction in the first quarter would be a record fall since the quarterly GDP data was made available in 1976. The Monetary Authority of Singapore was not immediately available to confirm that.

Despite a gloomy outlook for most industries, construction was expected to continue to grow 8.2 per cent compared with 7.5 per cent in a survey in December.

'As reflected by the mean probability distribution, the most likely outcome is for the Singapore economy to contract by 5.0 per cent to 5.9 per cent this year,' the survey said.

Singapore's Minister Mentor Lee Kuan Yew told a Reuters forum this month that the economy could contract 10 per cent this year if exports continue to weaken sharply. Mr Lee's growth forecast is twice as bad as the government's official view.

Singapore's DBS Bank said in a recent research report, the Republic could lose 99,000 jobs by mid 2010. A total of 16,880 workers lost their jobs in 2008, according to the Ministry of Manpower, but the unemployment rate was still at a low of 2.5 per cent on a seasonally-adjusted basis at the end of December.