(WASHINGTON) Michelle Jonasson-Jones, a Silver Spring, Maryland-based property agent, cautions potential tenants about a rental scheme making the rounds online that has caught the attention of the FBI.

Ms Jonasson-Jones said that she has had her listings for rental properties 'stolen' and relisted under a different name and a lower price, usually on Craigslist. The impostors send prospective tenants an 'application' and ask for their personal and financial information.

They tell prospective renters that the owner is working overseas and is unavailable to show the house.

Wendy Dufford, an intelligence analyst for the FBI in Columbia, South Carolina, wrote an article for the bureau's website after the South Carolina Association of Realtors called to report such a scam.

Tenants who had been scammed were showing up at people's houses, she said, believing they had rented from a missionary overseas.

A formal investigation won't be launched until a minimum threshold of losses is reported online, Ms Dufford said, but so far the FBI has discerned that the scam originated in Nigeria and is affecting cities nationwide.

'They're choosing victims because of the economy,' Ms Dufford said.

Many of the scam victims have been forced to rent, because they've lost their homes and are searching on Craigslist, she said.

'They try to rent these homes, and then they get their money stolen.' - WP
Posted by Richard Yeo at 11:50 PM No comments:

Average cost falls 2.2% in Aug as banks ration mortgages on lack of funds

(LONDON) UK home sellers lowered asking prices in August by the most in eight months as banks kept up the squeeze on credit, Rightmove plc said.

'In spite of pent-up demand, the market and pricing is boxed in by restrictive lending criteria put in place to ration mortgages given the lack of funds available to lenders,' Miles Shipside, Rightmove's commercial director, said in the statement.

Bank of England governor Mervyn King said last Wednesday that the world remains in 'deep recession' and that banks may need to raise more capital to rebuild their balance sheets. Policy makers this month voted to add £50 billion of newly printed money to its bond-buying programme to cement Britain's recovery from the worst recession in a generation.

The pound fell against the US dollar by the most in a week after the report. The UK currency dropped 1.1 per cent to US$1.6347 as of 9.50am yesterday in London.

The number of new homes on the market was 48 per cent below the level preceding the financial crisis, Rightmove said. The price demanded by sellers fell the most in the East Midlands, where it dropped 9 per cent.

In London, values in Haringey declined the most, falling 7.6 per cent, followed by a 6.4 per cent drop in Merton. Prices in the fashionable district of Islington fell 6.1 per cent.

Bank of England policy maker Andrew Sentance wrote in an article for the Sunday Times that 'the housing market appears to be turning'. He predicted that Britain's economy will return to growth in the second half of this year.

While data this month have added to evidence that Britain's economy is heading for recovery, rising joblessness may continue to damp people's ability to buy homes. Unemployment climbed to the highest level in 14 years in the second quarter, the Office for National Statistics said last Wednesday.

Consumers, with record debts of £1.5 trillion, are also struggling with existing mortgage payments. Bradford & Bingley plc, the biggest lender to UK landlords before it was taken over by the government, said last week that the proportion of mortgages in arrears more than doubled in the first half.

Most recent reports, including Rightmove's, have suggested stabilisation in house prices. - Bloomberg
Posted by Richard Yeo at 11:49 PM No comments:

New Home Loan Deal From HSBC At Sibor Plus 1%

HSBC has offered a new home loan that pegs interest rate to the three-month Singapore Interbank Offered Rate (Sibor), plus a spread of one percentage point.

The rate will be applied throughout the loan tenor and is valid for both completed and uncompleted properties with a loan size of at least $300,000.

There is no lock-in period, which is how long you would otherwise be tied to the bank and which allows it to penalise you if you decide to redeem your loan early.

HSBC's new loan offering comes as interbank rates are expected to remain tepid in the short term, especially as a speedy economic recovery is not on the horizon.

In comparison with the bank's current Sibor- pegged 'loyalty' home loan package - which charges spreads of 1.3 points for the first year, 1.2 points for the second year and 1.1 points subsequently - this new home loan could save about 7 per cent in interest payments for a loan size of $600,000 over 20 years.

The new home loan is available to all existing HSBC customers who have an account, credit card or investment with the bank, and is part of the bank's 'relationship-based home loan' programme.

No minimum balance requirement is required for the offer. Current HSBC home loan customers can also apply for the new home loan package if they wish to review their loan.

Customers who have no account with HSBC can apply for this new home loan after they deposit at least $50,000 in deposits, investments or insurance with the bank.

HSBC's new home loan offer is available until the end of next month.
Posted by Richard Yeo at 11:47 PM No comments:

(LONDON) Hold the celebrations and put the champagne away. A sustained recovery in the UK commercial property market is likely more distant than it might seem, as lingering economic hazards threaten a long-awaited rebound. 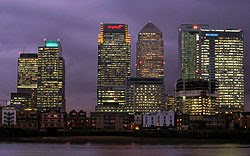 Shallow foundations? Some analysts fear a burst of unjustified optimism has replaced the blind panic which floored annual investment turnover by more than 50% to £22b (S$52.1b) in 2008

Coupled with a 75 per cent surge in property stocks since March, the positive signals have fired hopes of an imminent end to two years of turmoil in the market, where prices have almost halved since a summer 2007 peak.

But some analysts fear a burst of unjustified optimism has replaced the blind panic which floored annual investment turnover by more than 50 per cent to £22 billion (S$52.1 billion) in 2008.

'We had sleepless nights (in March) because we did not understand so much bearishness, those nights are unfortunately back. This time it is the violent bull run that wakes us up too early,' JPMorgan property analyst Harm Meijer said.

The weakening economy, a continued scarcity of debt and an expected withdrawal of government-engineered drivers such as low base rates mean a long-lasting recovery, with rising values supported by improving rents, could still be years away.

The FTSE 350 Real Estate Index, led by blue chips Land Securities and British Land, has nearly doubled since hitting a lifetime low on March 10. But analysts such as Nomura's Mike Prew say that the rally is built on shallow foundations.

'We are mindful that after the 1990s crash, real estate prices suffered a relapse with . . . soggy pricing until rental growth was comprehensively restored some two years later,' Mr Prew said, explaining Nomura's contrarian downgrade of the sector from 'bullish' to 'neutral' recently.

'Our concern is that real estate prices will become distorted by artificially supported economic activity. (The UK Reit sector) . . . no longer appears inexpensive to us,' he said.

Data from brokerage Cushman & Wakefield shows prime property yields dropped by 24 basis points to 7.17 per cent in the second quarter, raising concerns landlords are no longer receiving an adequate risk premium versus the 3.8 per cent for 10-year gilts.

This investment risk centres on rental security, which has fallen sharply as the recession forces weak tenants out of business and stronger tenants to dump space, analysts said.

Cushman's quarterly figures to end-June show an acceleration in rental falls, while the take-up of UK office space has plunged by around 50 to 60 per cent in the year to June 30, pushing peak-to-trough forecasts for prime rents down by a fifth.

'It looks like a W-shaped (property) recovery could be on the cards, caused by short spikes in demand and a subsequent realisation that the economic fundamentals remain weak,' said Mike Riordan, head of investment at brokerage Gerald Eve.

Moreover, UK buyers are still struggling to secure debt from traditional lenders such as Lloyds Banking Group and Royal Bank of Scotland, who continue to battle their own funding problems and costly exposure to UK commercial mortgages.

Other economic commentators suggest the surprise £50 billion expansion of the UK's quantitative easing programme recently is evidence the central bank sees a double-dip recession as inevitable, compounding risks of an early return to property. - Reuters
Posted by Richard Yeo at 11:45 PM No comments:

(DUBAI) A downturn in Dubai's residential properties market appeared to be nearing a bottom in the second quarter as the rate of price declines eased and transaction volumes stabilised, a Jones Lang LaSalle researcher said.

Dubai's once-booming property sector has been hit hard by the global financial crisis, but the pick-up in more mature markets such as the US and Britain, is starting to boost investor confidence.

'The stabilisation is showing that the market is reaching the bottom and sales activity is starting to come back in,' Craig Plumb, head of research at Jones Lang LaSalle Middle East and North America told Reuters on Sunday.

'Prices are reaching a level where people think they are willing to buy,' said Mr Plumb, adding that sales activity was expected to increase in the next six months. Average asking sale prices fell by about 24 per cent in the second quarter from the first quarter, but the rate of decline slowed, he said in a report published on Sunday. This signalled the gap between asking price and selling price was narrowing, he added.

The average rent for two bedroom apartments fell by 15 per cent in the second quarter, compared with a 22 per cent decline in the first quarter of this year.

Additionally, new residential supply will continue to enter the market as 22,400 units are expected to be handed over this year, despite the cancellation or delay of more than US$24 billion worth of housing projects, it said. -- Reuters
Posted by Richard Yeo at 11:44 PM No comments:

他指出，其实最近已经有好几个备售地段被“勾”了出来，例如一幅位于达哥打弯的一幅住宅地段，以及一幅位于武吉班让住宅地段，将在未来一两个月招标截止，为市场增添上千个共管公寓单位。
Posted by Richard Yeo at 11:30 PM No comments:

现在，几乎所有分析员也看好，发展商今年全年卖出的新私宅单位，将超越2007年的创下的1万4811个新单位的纪录。卓登国际（Chesterton）研究部主管陈瑞谨和资深房地产顾问麦俊荣都猜测，发展商可能在今年卖出大约1万6000个新私宅单位。博纳集团（PropNex）总裁伊斯迈更乐观，他看好今年人们会向发展商买下至少1万8000个新私宅单位。
Posted by Richard Yeo at 11:29 PM No comments: