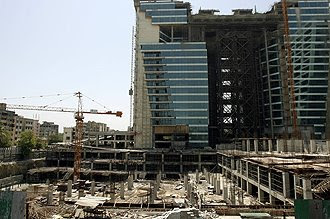 But falling prices have done little to redress fundamental mismatches of supply and demand in the residential market, Nair said. -- PHOTO: REUTERS

Prices for commercial and retail space will likely remain weak through 2010 because of oversupply and slack demand, CRISIL said in a new study of 10 cities across India.

'Residential real estate is where we think by 2010 we can look for some kind of recovery,' head of research Sudhir Nair said in a conference call with reporters. 'There is a significant overhang of supply in commercial projects. ... You can't see a lease rental increase for a couple of years in this market.'

India's property market, like many around the globe, boomed from 2005 to mid-2008. Average prices of both commercial and residential space more than doubled during that period, according to CRISIL.

In some high-demand places, like Mumbai, the nation's financial capital, commercial prices went up 231 per cent, while residential prices rose 121 per cent.

Since July, prices have softened. CRISIL predicts commercial lease and rental rates will fall by 38 per cent from early 2008 peaks. Residential prices have already fallen by an average of about 20 per cent, and will likely correct another 10 per cent, CRISIL said.

But falling prices have done little to redress fundamental mismatches of supply and demand in the residential market, Nair said.

What India needs is affordable housing close to jobs. Developers who snapped up pricey land in urban centers during the boom, however, can't afford to build cheap housing there and instead are sitting on the land, Nair said. -- AP
Posted by Richard Yeo at 11:59 PM No comments:

Retired cabby among six who receive payment; 344 have applied so far

RETIRED taxi driver Chia Boon Chuan was all smiles on Tuesday as he became one of the first home owners to receive a payout from the Housing Board's new Lease Buyback Scheme (LBS). 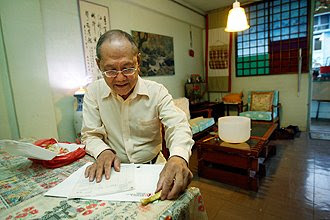 Under the scheme, Chia Boon Chuan will be paid more than $400 a month for the rest of his life. -- ST PHOTO: LIM WUI LIANG

The 68-year-old bachelor has been living alone in his two-room Queensway flat for more than 40 years. With no children to provide financial support, he has been dipping into his savings and annuities for the past eight years.

Now, under the LBS, he has received a $5,000 upfront payment and will be paid more than $400 a month for the rest of his life, in exchange for the tail-end of the 99-year lease of his flat.

'I'm very, very happy,' Mr Chia said. 'I even tried to persuade some of my neighbours and friends to apply...I'm saving up my money for a rainy day, but I'll probably buy a laptop later as at the moment I've no computer.'

Five other home owners also received cheques from the HDB on Tuesday. A total of 344 applications had been received as of Tuesday.

Under the scheme, the HDB will buy back the tail-end of a flat's lease at market rate, leaving the household with a remaining 30-year lease. A $10,000 subsidy will be given and half of this paid upfront. The other half, along with the money for the lease, will be used to buy a new CPF Life annuity in the home owner's name that will provide a monthly stream of income for life.

Applicants have to undergo financial counselling to ensure they understand the terms and conditions of the scheme. For instance, they cannot bequeath the flat to their children.

The LBS targets those without the option of living in a rental flat, downgrading to a smaller flat, sub-letting their entire flat, or relying on family support, said Mr Tay Kim Poh, HDB's chief executive.

He explained: 'The applicants (so far) are...mostly retirees who don't have other sources of incomes. Most of them are living (only) with their spouse, so in that sense they do not get much family support from their children.

'This is a good scheme for them as it provides a steady source of income for their retirement needs. And they can continue to live in the same flat - the same environment which they're familiar with.'

Read the full story in Wednesday's edition of The Straits Times

THE Lease Buyback Scheme (LBS) was launched on March 1. As of yesterday, the HDB had received 344 applications and given payouts to six households.

# The scheme is available to low-income Singapore citizens who own three-room or smaller flats, with an outstanding mortgage loan of $5,000 or lower.

# Applicants must be at least 62 years old.

# The HDB will buy back the tail-end of the flat lease at market rate, leaving the household with a remaining 30-year lease.

# The other $5,000, along with the money for the lease, is used to buy a new CPF Life annuity in the home owner's name.

# The amount of monthly income that a household receives from the scheme depends on the market value of the flat, the amount of remaining lease, and the age and gender of the applicant.
Posted by Richard Yeo at 11:54 PM No comments:

Transactions up 71% in the second quarter, with HDB upgraders driving demand.

THE mini boom that started in the sale of new flats has now spread to the resale homes market, with transactions rocketing 71 per cent in the second quarter. 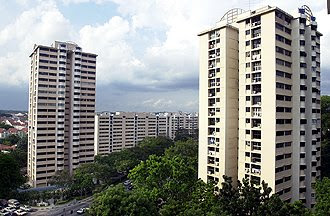 The mini boom that started in the sale of new flats has now spread to the resale homes market, with transactions rocketing 71 per cent in the second quarter. --ST PHOTO: STEVEN LEE CT

Sellers have quickly become attuned to the unexpected resurgence in demand and are jacking up asking prices, according to consultants Jones Lang LaSalle.

Much of the demand is coming from HDB upgraders who are still able to get reasonable prices for their flats, allowing them to move up the housing ladder. 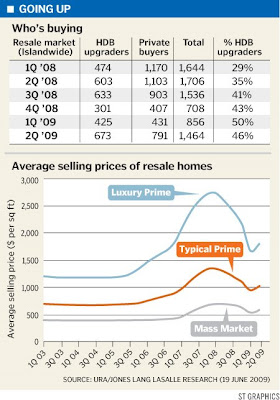 The activity in the resale market follows strong sales of new private homes. Levels have exceeded 1,000 units every month since February compared with a monthly average of 330 units last year. Prices are also showing resilience amid the downturn, with resale prices beginning to rise in all categories.

The property sector rallies seem to contradict prevailing economic realities, industry experts acknowledge. DTZ's head of Southeast Asia research, Ms Chua Chor Hoon, told a property seminar yesterday that it is too early to tell if the Singapore market is on its way to recovery: 'Unlike Hong Kong, we don't have a China behind us.'

Jones Lang LaSalle's head of research for Southeast Asia, Dr Chua Yang Liang, told The Straits Times: 'My concern is that the price rise in the resale market is not supported by economic growth or personal income growth.' It is instead largely backed by money earned in the previous bull run, which is not sustainable, he said.

Resale demand, said Jones Lang LaSalle, is largely for finished projects, driven by the need for immediate occupation and good rental yields. Prelimary second-quarter estimates show HDB upgraders accounted for 46 per cent of resale deals, up 11 percentage points from a year ago.

HDB prices have not fallen much, so owners can still sell at attractive prices and upgrade to a private home. The demand has pushed up resale prices, even though affordability remains key.

When compared with prime market sectors, the mass market segment shows the highest rebound, said Jones Lang LaSalle. Average resale prices were up 9.4 per cent to $580 psf in the second quarter compared with the first quarter.

They are now 49 per cent above the low point of the second quarter of 2005 but remain about 17 per cent below the first quarter peak last year.

Some buyers are increasingly more willing to commit as they believe this discount is sufficient, said Jones Lang LaSalle. For instance, resale deals at Ardmore Park were done at an average of $2,146 psf in the second quarter compared with one deal at $1,976 psf in the first quarter.

Some analysts warn of too much exuberance given the ample supply and falling rents but others are more positive. A recent Credit Suisse report said that while new homes sales may slow, the resale market is likely to pick up the slack. An earlier UBS Investment Research report highlighted the rise in resale deals as evidence of sustainable recovery in the physical property market.
Posted by Richard Yeo at 11:46 PM No comments:

SINGAPORE no longer appears on the radar screen of most non-listed institutional investors and fund managers, according to the latest survey by Asian Real Estate Association (Area). 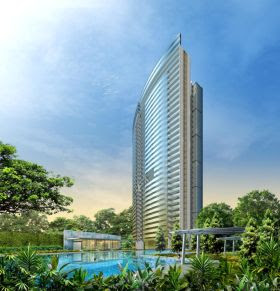 The online survey of 73 organisations active in the Asian non-listed real estate funds market found that less than 20 per cent of fund managers and just 10 per cent of investors chose Singapore as their preferred investment location.

China is the most appealing location in terms of Asian performance prospects - it is the choice of 90 per cent of investors and 81 per cent of fund managers.

Japan was the top fund choice for fund of funds managers, firms that hold a portfolio of various investment funds, with 88 per cent of them opting for the country.

Australia, a new entrant, was also a firm favourite.

'With the exception of China, investors generally appear to have a lower regard than fund of funds managers or fund managers on the prospect of other Asian markets delivering target performances,' said the survey.

This year, Singapore did not figure at all in respondents' preferred locations and sectors in Asia.

In last year's survey, the Singapore office market was ranked seventh on the list of respondents' preferred locations and sectors in Asia - though fund of funds managers were already not keen.

The number of institutions interested in Singapore has certainly diminished due to the downturn, said Mr Craig Ward, director of regional capital markets at Savills Singapore.

'There are still some institutions keen on the Singapore office market, but pricing has not reached an equilibrium.'

According to the survey, investors this year are most keen on the residential sector in China, followed by its retail market.

Fund of funds managers, however, prefer the Australian and the Japanese office sectors.

'Singapore is one of the most open economies in the world, so it is more than averagely affected by the downturn,' said Mr Robert Lie, co-director of Area's executive committee.

But it is an attractive mature market over the medium term, he added.

'A lot of investors are cautious. Basically, indicated prices have to correct,' said Mr Lie, who is also managing director of Redevco Asia.

Asia is the second home market of Redevco, which owns one of the largest retail real estate portfolios in Europe.
Posted by Richard Yeo at 11:44 PM No comments: