(LONDON) Britain's economic downturn is likely to be deeper and last longer than originally feared and it might turn out to be the worst for 60 years, its finance minister said.

Chancellor of the Exchequer Alistair Darling's frank comments in a newspaper interview on Saturday suggested concern at the top of the government that the economic slide will make it difficult for Prime Minister Gordon Brown to recover ground and fend off a resurgent opposition Conservative Party.

Mr Brown's Labour government has seen its opinion poll ratings plummet in the last six months and it is now languishing 21 points behind the Conservatives.

A national election must be held by mid-2010 at the latest.

Mr Darling told The Guardian newspaper that the government had failed to get its message across and would battle to persuade a sceptical electorate it deserved another term in power.

The Guardian quoted Mr Darling as saying economic times for the country were 'arguably the worst they've been in 60 years'.

'I think it's going to be more profound and long- lasting than people thought,' he said.

His comments came just days before a planned package of measures designed to buffer the economy and help the government regain the political initiative.

'We've got our work cut out. This coming 12 months will be the most difficult 12 months the Labour Party has had in a generation, quite frankly,' Mr Darling said.

'We've got to rediscover the zeal which won three elections, and that is a huge problem for us at the moment. People are pissed off with us.'

The BBC called the interview an 'astonishing intervention' and reaction from opposition politicians was swift.

Conservative economy spokesman George Osborne chided Mr Darling for 'letting the cat out of the bag' about the real state of the economy while Liberal Democrat spokesman Vince Cable called Mr Darling's comments a 'scarcely concealed attack' on Mr Brown himself.

The bleakness of Mr Darling's assessment of the economy marks a departure from his previous line that Britain's flexible labour market left the country well placed to withstand the global credit crisis.

Justifying his sharp tone, Mr Darling said honesty was the best way of dealing with the credit crisis.

'We've got a credit crunch, the like of which we have not seen in generations,' he told the BBC. 'That's why it's necessary for us to support the economy and help people get through these difficult times.'

Some commentators suggested Mr Darling was massaging the public ahead of a wide-ranging economic package next week.

The package will include help for Britons struggling with plunging property values and soaring fuel bills.

The speed and scale of Britain's economic downturn has become increasingly apparent. Official figures showed the economy failed to grow in the second quarter for the first time since the early 1990s.

The pound has suffered its worst month against the dollar since sterling's ejection from Europe's Exchange Rate Mechanism in 1992 and a growing number of analysts believe the economy may have already tipped into recession.

House prices have crumbled by more than 10 per cent over the past year and the number of mortgages approved for home purchase has hit a record low, suggesting no hope of recovery anytime soon.

Bank of England policymaker David Blanchflower told Reuters earlier this week that two million Britons could be out of work by Christmas and interest rate cuts were urgently needed to stop the economy heading into a prolonged slump. -- Reuters
Posted by Richard Yeo at 9:24 PM No comments:

The Government will with immediate effect waive the collection of building premium where lease extensions are granted.

A land premium and a building premium are currently charged when extending a State lease, based on the Common Law principle that both land and buildings would revert to the Landlord at the end of the lease.

In 1997, the Government decided to waive the building premium for short-term industrial and institutional leases. The change was made on the recommendation of the Committee on Singapores Competitiveness.

Extension of State leases will be on a case-by-case basis where they are in line with planning intention and help to further specific economic and social objectives.
Posted by Richard Yeo at 8:33 PM No comments:

LONDON (Britain) - BRITISH house prices fell for an 11th straight month in August to stand 5.3 per cent lower than a year earlier, a survey by property consultants Hometrack showed on Monday.

The monthly price drop of 0.9 per cent was slightly smaller than the previous two months, however. The figures are not adjusted to take seasonal factors into account.

Mr Richard Donnell, Hometrack's director of research, said there were signs falling prices were starting to attract buyer interest but warned it could be some time before the market stabilised.

'We may well start to see a moderation in the rate of monthly price falls. However, with ever growing uncertainty amongst households over the broader economic outlook the current re-pricing of housing still has some way to run,' he said.

The survey showed properties were on average taking more than 11 weeks to sell, almost twice the time taken a year ago.

The number of viewings to achieve a sale fell for the first time in almost a year.

The proportion of the asking price being achieved fell to 90.7 per cent in August, the lowest level since the survey began, from 90.9 in July. -- REUTERS
Posted by Richard Yeo at 8:31 PM No comments:

SINGAPORE and Malaysia have reiterated their commitment to honour and abide by the International Court of Justices judgment on Pedra Branca, Middle Rocks and South Ledge. 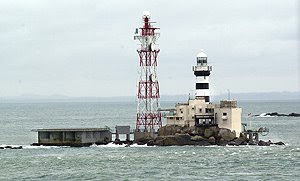 The two countries also agreed to fully implement its decision by continuing the discussions pursuant to the first round meeting of the Malaysia-Singapore Joint Technical Committee (MSJTC) here on June 3.

This was stated by both the Foreign Ministers of Singapore and Malaysia, George Yeo and Datuk Seri Rais Yatim respectively in a joint statement released by the Singapore Foreign Ministry here today.

The statement said both countries conveyed their commitment when their senior officials met in Putrajaya on Aug 20 to further discuss the implementation of ICJ's judgment on the three rocky outcrops in the Singapore Straits.

The statement said the MSJTC reviewed the work of the Sub-Committee on Joint Survey Works and agreed that the sub-committee should continue to hold discussions in the following weeks to finalise technical preparations relating to the joint hydro-graphic survey.

The meeting also agreed on the establishment of a Sub-Committee on Maritime & Airspace Management and Fisheries which met on the same day.

The meeting agreed that traditional fishing activities by both countries would continue in waters beyond 0.5 nautical miles off Pulau Batu Puteh, Middle Rocks and South Ledge respectively.

The MSJTC agreed that the sub-committee should also continue to hold discussions in the following weeks with regard to other issues relating to maritime and airspace management.

Both sides were also pleased with the progress made by the Joint Technical Committee and agreed that the next meeting be held here this month. -- BERNAMA
Posted by Richard Yeo at 8:27 PM No comments:

DUBAI - THE developer of a Dubai skyscraper set to become the tallest building in the world says the rising tower now stands at a 'new record height' of 2,257 feet or 688 metres.

Its exterior is almost done and work has started on the interior.

The company's Monday statement gave no other details. The silvery steel-and-glass building's final height is a secret.

Last summer, the developer announced the building surpassed Taiwan's Taipei 101 which has dominated the global skyline at 1,667 feet or 508 meters since 2004.

In the four years of construction, Emaar twice postponed the skyscraper's finish, now slated for September 2009. -- AP
Posted by Richard Yeo at 8:22 PM No comments: