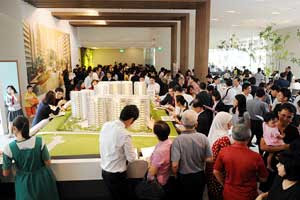 公司原本目标是销售10个单位，套取大约3000万元现金来投资不良资产。但是，过去两三个周末已总共售出36个雅乐居(Gallop Gables)单位，套现一亿多元。由于所剩的单位不错，它也已经提高售价。
Posted by Richard Yeo at 11:55 PM No comments:

It is expected to lease back the property, at 18 Tuas West Avenue, for three months before moving its operations elsewhere, BT understands.

The buyer is said to be an industrialist who bought the factory for his own use. Bidding began at $3.25 million, and the property was sold after 16 bids.

There were two contenders.

The factory was put up for auction by Jurong Tech's judicial managers Tam Chee Chong and Keoy Soo Earn of Deloitte & Touche.

It was was one of two properties sold at the auction, conducted by Colliers International at Amara Hotel. The other property sold was a 1,970 sq ft freehold apartment on the 13th floor of Orchard Towers in Claymore Road, where a collective sale was once planned.

The apartment, with three bedrooms and a study, changed hands for $1.9 million, working out to $964 per sq ft. The buyer is a Singaporean.

Separately, Jurong Tech said in a statutory filing with the Singapore Exchange (SGX) on Wednesday that the release of its financial statements for the year ended Dec 31, 2008, has been further postponed to 'no later than July 15, 2009'.

This comes after the judicial managers requested a further extension beyond the initial postponement to 'no later than April 30'.

Yesterday's statement said the managers are conducting a detailed review and reconciliation of documents with the company's accounting records and consolidated management accounts.

'The amount of work required for such review is substantially more than that which is reasonably expected,' the statement said.

Judicial managers were appointed in February after an unnamed creditor applied to put Jurong Tech under judicial management. The company faces legal demands for repayment of loans from at least six banks, which are claiming a total of more than $200 million.
Posted by Richard Yeo at 5:56 AM No comments: