Past winners include Tokyo's Roppongi Hills and Shanghai's Xintiandi

The transformation of the neighbourhood, once infamous for its population of transvestites, has been more than 20 years in the making. 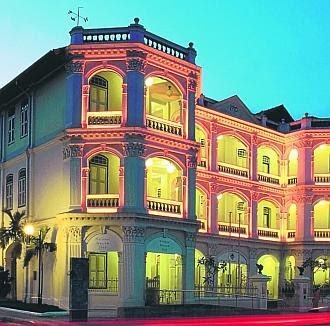 RICH HISTORY: The area is home to many well-preserved old buildings. -- PHOTO: URA

Now, the makeover has won the Urban Redevelopment Authority (URA) plaudits from an international non-profit institute that specialises in land use and urban development.

The Urban Land Institute (ULI) handed the URA an excellence award for its work in the Bras Basah-Bugis area yesterday in Tokyo.

The annual honours are regarded by those in the land-planning industry as the most prestigious in the world.

As one of five award recipients this year, Bras Basah-Bugis joins past winners like Tokyo's Roppongi Hills and Shanghai's Xintiandi - both hip hot spots famous for their shopping and nightlife - in the winners' circle.

Calling the award a 'great honour', URA chief executive Cheong Koon Hean said: ' I'm very glad that our hard work over the past two decades has paid off and our planning efforts have been recognised at an international platform.'

This is the second time that the URA has won an ULI award. It was also recognised in 2006 for its conservation efforts.

Minister for National Development Mah Bow Tan credits the Bras Basah-Bugis success to a programme of development that built on the area's rich history and architectural heritage.

The 95ha area, the equivalent to about 190 football fields, includes 12 places of worship.

'What the URA did was to identify those features of the district that many Singaporeans hold dear, preserve its authenticity, enhance the distinctive character and introduce new uses that are complementary to existing ones,' Mr Mah told The Straits Times in an e-mail.

Once known for its rambunctious night bazaars, the area's modern-day rejuvenation began in 1989 with sale of a site for shopping mall Bugis Junction.

The URA also wooed schools like Singapore Management University and Lasalle College of the Arts to set up campuses here. Today, the 12,000 students from these institutions are a key part of the area's buzz.

Said Ms Adelina Ong, the centre's assistant manager of artistic development: 'It is an ideal location because it allows us to connect with these institutions and independent collectives, creating opportunities for our students to pursue further development in the arts through them.'

The arty vibe has been good for business as well. There has been an increase of over 30 per cent in median rent for the area's office space from 2000 to last year.


Springing up soon in Bugis and Bras Basah

Designed by local architecture firm Woha, this station will feature a reflecting pool that stretches between the National Museum and the Singapore Art Museum. It is part of the Circle Line, which is scheduled to be operational in 2010.

Expected to be ready later this year, this landscaped path will connect the Singapore Management University to Fort Canning Park.

This mall, located on a 8,921 sq m site opposite Bugis Junction, is expected to be ready by the end of this year. Sixty per cent of its space will be devoted to arts and entertainment outlets such as cineplexes and theatres.

The National Arts Council has expressed an interest in turning the building into a centre for artists. Mr Andrew Fassam, the Urban Redevelopment Authority's deputy director of urban planning and design, said details had not been finalised.
Posted by Richard Yeo at 11:13 AM No comments: