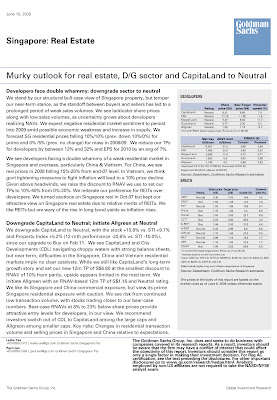 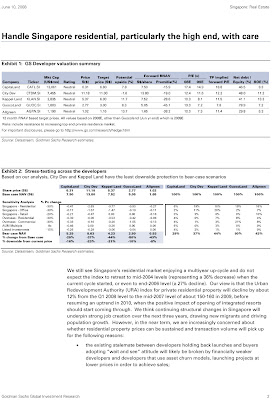 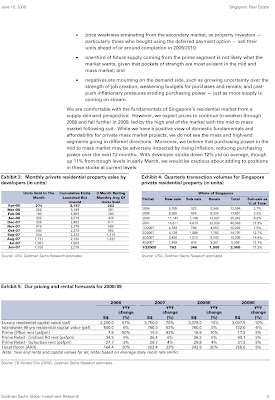 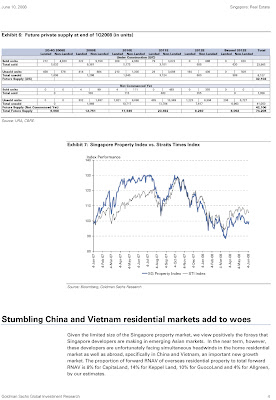 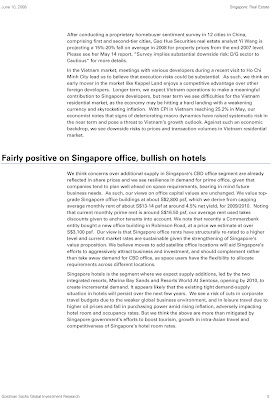 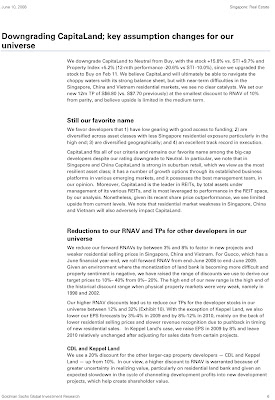 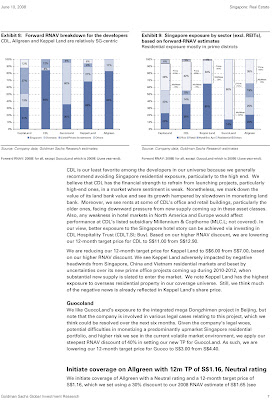 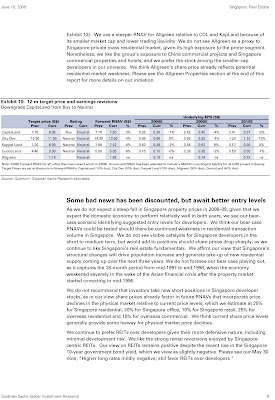 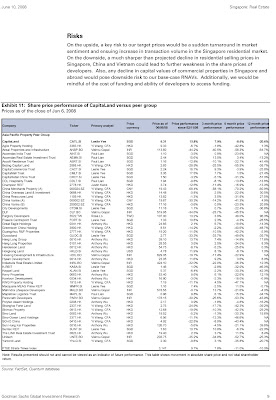 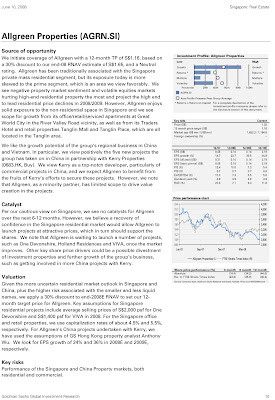 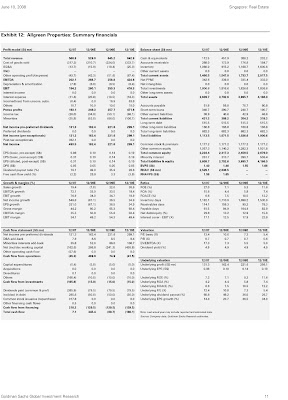 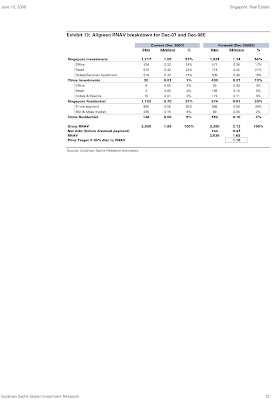 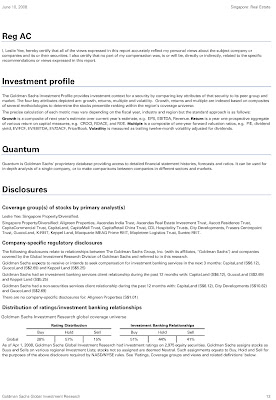 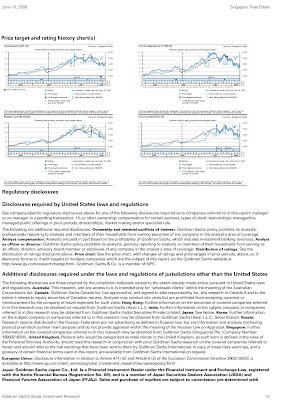 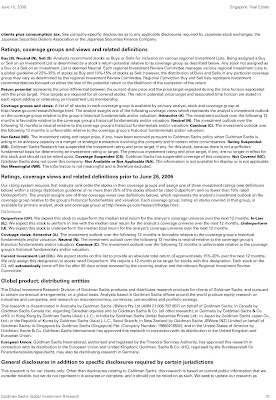 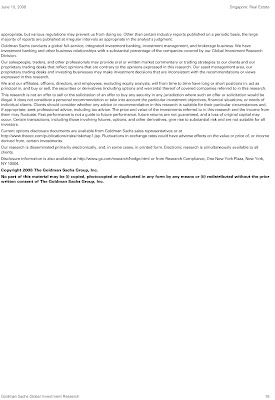 Posted by Richard Yeo at 7:15 PM No comments:

THE 18th floor of Peninsula Plaza near City Hall has been sold to a Taiwanese trading company for $14.9 million.

It is also well below what the seller Novelty Department Store, part of the Novelty Group, wanted - $17.5 million or $2,050 psf of strata area.

The six units have a total floor of about 8,500 sq ft and were put on the market in early March through an expression of interest exercise.

Rising rents here prompted the buyer, which has not been named, to buy the floor, said marketing agent Shaun Poh, a senior director at DTZ.

The firm will occupy two or three of the units when the tenancies expire in a few months.

The six units are tenanted at about $4 psf, but rents in the building have risen to as much as $8 psf so the firm can look forward to a better return when the time comes to renew the other leases.

The market for strata-office units has remained fairly active, considering how quiet the residential market has become.

While office rent increases have started to moderate, rents in general are still supported by demand from expanding firms and tight supply.
Posted by Richard Yeo at 7:01 PM No comments:

Sengkang West Going For A Makeover As Recreation Hub

The rustic town goes from ulu to cool.

The aim is to redevelop the rustic town into a 'suburban recreational hub'. 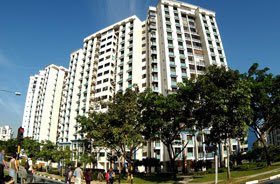 There will be new parks, restaurants by the river and water-sport activities by next year.

He unveiled these plans for the ward at a press conference yesterday ahead of a visit to the area by Minister in the Prime Minister's Office Lim Swee Say.

Mr Lim will tour the ward, which is part of Ang Mo Kio GRC, on June 22.

Sengkang West, which was formed in the run-up to the 2006 General Election, is home to about 35,000 residents but is relatively undeveloped compared to the neighbouring Sengkang areas and Punggol.

But that will change. And it will be more than just having a different image.

The changes will cater to the needs and lifestyle of residents in the ward, more than half of whom are couples in their 20s to 40s.

These will include a Sengkang sports and recreation centre, which is almost complete. It will have, among other things, swimming

pools, a sports hall, a gymnasium and dance studio.

A section of the Punggol River will be dammed so that there will be a calmer reservoir area where residents can take part in water sports activities.

A Sengkang riverside park will also be built nearby, and a waterfront deck, lined with restaurants, will overlook the river.

As water sports will be a new feature in the town plan, Dr Lam has also formed a 'guardians group' to look into safety issues for sports and water activities.

The group, made up of a dozen grassroots leaders, will ensure there is proper medical assistance on the ground.
Posted by Richard Yeo at 6:59 PM No comments:

Board has to find ways to cater to the poor as well as those better-off, says Mah

AS THE population grows and becomes more diverse, the Housing Board will have to find creative ways to keep its flats affordable for low-income families but attractive for the better-off. 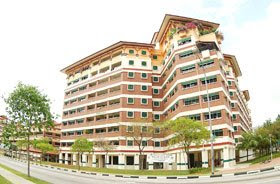 He said costs are estimated to jump a further 20 per cent this year and they could start pushing up the prices of HDB flats. 'Construction costs have gone up significantly...HDB is trying to contain the cost as much as it can.'

These higher costs will not directly affect the selling prices of flats, as the Board prices flats at a discount to market prices rather than based on cost, Mr Mah said.

But building costs will boost the market prices of flats, so 'there will be some feed through' to HDB prices.

'We cannot escape that. But the important thing is, as salaries go up and prices are fixed at a discount to the market, flats will continue to remain affordable,' added Mr Mah, who made a special visit to the HDB Hub in Toa Payoh yesterday to congratulate staff on winning a United Nations (UN) Public Service Award.

The HDB's 44-year-old Home Ownership Programme was honoured for improving transparency, accountability and responsiveness in the public service. HDB chairman James Koh Cher Siang and chief executive Tay Kim Poh will accept the award at a ceremony held at the UN headquarters in New York on June 23.

Mr Mah praised the agency for its success over the past 48 years in moving Singaporeans out of slums into clean and modern flats. In its first five years, HDB built 50,000 flats; now there are 900,000, housing more than 80 per cent of the population.

He also pointed out the new challenges the Board is facing, including the key issue of helping more low-income families buy a flat rather than rent one.

'Those with income of $1,000 to $1,500 a month, although they are eligible to rent a flat, I much rather they own a flat because from there they can build a base and own some assets,' he said.

The cheaper two-room flats the Government has been building over the past few years will be ready soon, with construction to be ramped up, he added.

For those who cannot afford to buy even the cheapest flats, HDB will make available 20 per cent more rental flats over the next three years, Mr Mah said.

On the other end of the spectrum, better-off Singaporeans should also get to enjoy the 'HDB experience'. To this end, condo-like flats are being built under the Design, Build & Sell Scheme in areas such as Boon Keng and Bishan.

HDB also launched a new Build-To-Order project at Marsiling yesterday. Straits Vista @ Marsiling is near Woodlands Regional Centre and is the first new public housing estate in Woodlands in recent years. It will offer 50 three- room and 332 four-room flats.

Applications can be made until June 23.

WHAT IT IS: An annual award for excellence in public service that has been given out by the United Nations since 2003. There were four winners each in three categories this year. HDB was the only Asia-Pacific winner in its category: improving transparency, accountability and responsiveness in the public service. The other two categories were improving the delivery of services and fostering participation in policy-making decisions through innovative mechanisms.

Singapore has won the award in the past.

Board trying to contain cost by simplifying some projects

CONSTRUCTION costs for Housing & Development Board (HDB) flats have increased but the impact on buyers is likely to be limited, due to HDB's pricing policy and cost-control measures.

Mr Mah: For new flats, higher costs will probably feed through indirectly as market price of flats goes up

Speaking to the media at HDB yesterday, National Development Minister Mah Bow Tan said that 'construction costs have gone up significantly both for the building of private as well as public housing'. According to him, construction costs may have risen 20 to 30 per cent in general.

'HDB is trying to contain the cost as much as it can,' he added. One way is to simplify some of its projects. The government is also withholding some projects to ease pressures on the construction sector.

Asked how much of the increase in construction costs would go to buyers, he said that 'for new flats, it should not feed directly through to the buyers, but it will probably feed through indirectly as the market price of flats goes up'.

In a forum reply last year, HDB mentioned that the prices of new flats are based on the market prices of resale HDB flats, not on construction costs. 'In order to provide affordable housing to Singaporean families, new HDB flats are priced below their equivalent market values,' said the reply.

Mr Mah assured that the prices of public housing will remain affordable.

The squeeze in the construction sector is not likely to delay the integrated resort projects. Progress is 'on track', he said.

Mr Mah also expects demand for HDB flats to strengthen if Singapore's population grows as it has over the last few years. 'We are monitoring the situation, and as the demand grows, we are also increasing the supply.'

He pointed out, however, that 'we must also always be careful that we do not overbuild.'

HDB will receive the United Nations Public Service Award for its home ownership programme on June 23 and Mr Mah was at the agency to celebrate the win. There are more than 800,000 HDB flats in Singapore, housing more than 80 per cent of the resident population. About 95 per cent of HDB households own their homes.
Posted by Richard Yeo at 12:58 PM 1 comment: