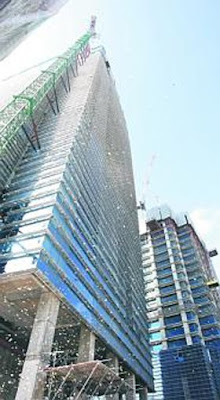 Popping the confetti: Standard Chartered is an anchor tenant and will be taking up 500,000 sq ft. The building will obtain temporary occupation permit next year

Tower One achieved a 100 per cent pre-commitment rate when it was launched in 2007. Standard Chartered Bank is an anchor tenant and will be taking up 500,000 sq ft of office space. The 33-storey building will obtain its temporary occupation permit next year.

There has been an increase in leasing enquiries for space at MBFC in the past few months, said Raffles Quay Asset Management general manager Wilson Kwong.

Marina Bay has attracted investments of more than $27.5 billion from both the private and public sectors so far.
Posted by Richard Yeo at 11:55 PM No comments:

Markets Could Be In For A Reality Check

Last week, property data confirmed that Q2 2009 was one of the best performing on record.

July has been a month of unusually good news. It began with the astounding jump in GDP growth figures for the second quarter, which saw economists quickly revise full-year growth estimates upwards. Then, last week, property data confirmed that Q2 2009 was one of the best performing on record, with the number of new home sales exceeding those for the whole of 2008. The Housing and Development Board’s resale price index also reached an all-time high in the quarter. Industrial production was down in June, but the NODX rose by 7.6 per cent in quarterly terms. And the Singapore stock exchange has also rebounded nicely. 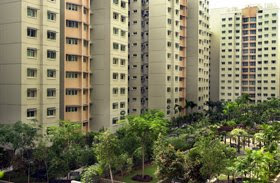 But this was all news that was not quite in accord with the tone of the official outlook for the economy. After revising the 2009 growth forecast from a contraction of 6-9 per cent to 4-6 per cent, the Ministry of Trade and Industry (MTI) said: “Notwithstanding the improved performance in the second quarter, the outlook for the rest of the year remains largely unchanged – of a weak recovery susceptible to downside risks.” This was attributed to the continued weakness in the global economy, with MTI citing rising unemployment and reduced household spending in the US and the euro zone. It added that the housing markets in many leading economies have yet to bottom out, while financial institutions are still in the process of deleveraging. “At this juncture, there is no evidence yet of a decisive improvement in final demand,” it added.

While the Singapore economy is very open and reliant on the global economy, it is interesting to find that the asset markets here are capable of running up far in advance of an economic recovery. There are, however, good grounds to be circumspect. One of the reasons for the increase in the GDP numbers was the spike in biomedical manufacturing output and electronics inventory restocking. MTI said both may not be sustained.

Recently, Prime Minister Lee Hsien Loong also drew attention to the uncertainties ahead. “For the next couple of years – 2010, 2011 – we don’t know how the world economy will be, and how that will affect us and what we can do about it,” he said. US officials have also expressed caution as to when the economic recovery will kick in. Moreover, there will be a time lag of at least a couple of quarters before a US recovery spills over into Asia.

And yet, we have this stock and property market exuberance. One of the reasons for this is simply the volume of liquidity sloshing around the world at a time when monetary policies are easy just about everywhere. But this is not a sustainable dynamic. At some point, the monetary stimuli will have to be withdrawn, and markets would need to be better supported by economic fundamentals. Market players should be wary of this. They should recognise that, at this point, they are ahead of the economic curve, and that, sooner or later, the markets will come up against a reality check.
Posted by Richard Yeo at 11:53 PM No comments:

在政府组屋市场，马宝山昨天也表示，若有需求，接下来政府或许会推出更多四至五房式的组屋单位。
Posted by Richard Yeo at 11:50 PM No comments: 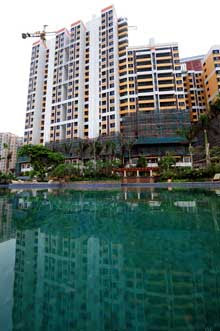 该行相信，在第三季度成交量将会较第二季度有所放缓，但仍相对活跃，并预计在第三季度高档别墅和高档公寓的价格还将有所上升。
Posted by Richard Yeo at 12:38 AM No comments: