KPE To Cut Journey Times By Up To 25%

A North South Expressway (NSE) will also be completed by 2020.

'It provides residents in north-east Singapore faster and more direct access to the city centre,' he pointed out. 'It also offers many motorists who now use the Central Expressway an alternative route.'

The 12-km KPE runs from East Coast Parkway (ECP) to the Tampines Expressway (TPE). Costing $1.7 billion to build, the KPE is part of the government's commitment to build roads to support economic growth.

The authorities say the KPE is expected to cut journey times in the north-east corridor as much as 25 per cent, benefiting motorists travelling between the north-east sector and the city, and to improve connectivity between the ECP, Pan-Island Expressway and TPE.

After the KPE, the government will build the Marina Coastal Expressway (MCE), to be completed by 2013, to replace the ECP at Marina Bay as a high-speed link between the ECP and the Ayer Rajah Expressway.

The MCE and NSE are expected to cost more than $10 billion. And, on top of this, $3 billion will be spent on smaller projects over the next five years. These include road widening and extensions to relieve bottlenecks. For example, a new vehicle bridge over Sungei Serangoon will be built to give motorists travelling from Sengkang and Punggol new towns direct access to the KPE.

Also, there will be an extension of Bartley Road to Tampines Avenue 10 and widening of the PIE from the Bukit Timah Expressway to Adam Road.
Posted by Richard Yeo at 7:40 PM No comments:

Property Risks Back In Spotlight

THE property business has come full circle for listed developers here. A few years ago, with land prices on the upswing and intensifying competition in Singapore, many property companies ventured overseas into untapped markets in search of better returns. Their overseas units flourished. And for the past few years, these units have been fattening the bottom lines of many property firms here. 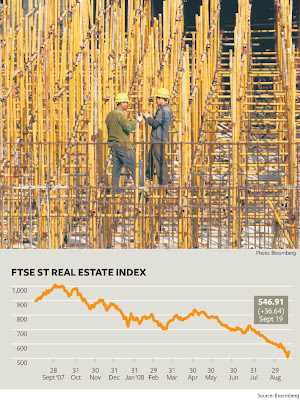 While the going was good, there was a tendency, when it came to evaluating such companies, to overlook the commonly-acknowledged risks inherent in developing markets - such as changing regulatory environments and the tendency of foreign investors to flee when the going gets even a bit rough. But now, with the property markets in China (and to a lesser extent Vietnam) taking a beating - in part due to government actions - those risks are being thrown into the spotlight once again.

Last week, China Vanke, China's largest listed property developer, reported a 35 per cent drop in its August real estate sales. The developer also reportedly cut prices in Nanjing, Guangzhou, Shanghai and Beijing by as much as 20 per cent. Soon after, news emerged of other developers following suit with substantial price cuts.

There are no signs of the Chinese government stepping out to halt the slump in the property market. In an announcement by the People's Bank of China in late August, the central bank continued to call on commercial banks to tighten their lending to property developers and restated its curbs on bank loans directly for land purchases by developers.

'We think recent price cuts could further depress pricing of residential properties and lead to prolonged weakness in an already ailing China property market as other developers may undercut prices for their properties and buyers are likely to avoid the market on concerns of further price cuts,' said OCBC Investment Research analyst Foo Sze Ming.

In Vietnam, prices could also head south. Like in China, the government in Vietnam is fighting inflation with various regulatory measures to cool the economy. A liquidity crunch also means that smaller and non-reputable developers could be forced out of the market.

Many Singapore-listed property companies have targeted China, Vietnam, and also India, another emerging market, for expansion over the past few years. Now, with the property market in Singapore taking a pause, developers with large stakes in these emerging markets, such as CapitaLand, Keppel Land and GuocoLand, have to assure investors that they have not over-stretched themselves.

But looking ahead, analysts are throwing their weight behind those developers who have stayed put in Singapore. Kim Eng Research, for example, said yesterday that its picks for the sector are Singapore-centric property developers City Developments and Wing Tai as beta plays for a recovery in the Singapore property market in the future.

On their part, developers with assets in emerging markets have been pointing to the strong fundamentals in these countries. Growing middle classes, increasing disposable incomes and housing affordabilities as well as rapid urbanisation are all key drivers for real estate demand, they say. Some also point out that their overseas exposure is not as large as their presence in the relatively more stable Singapore.

'CapitaLand's exposure in China is a balanced one with exposure to the residential, commercial, retail, serviced residence and financial services sectors across multiple regions,' said Lim Ming Yan, chief executive of CapitaLand China. As at June 30, 2008, CapitaLand's assets in China came to some $7.4 billion and accounted for 27 per cent of CapitaLand's total assets.

CapitaLand's presence in Vietnam, on the other hand, is much smaller, the developer said. 'CapitaLand is relatively early in expansion in Vietnam and our current exposure is just under one per cent of the group's total balance sheet,' said Chen Lian Pang, chief executive for South-east Asia for CapitaLand Commercial.

Similarly, both Keppel Land and GuocoLand have stressed that their portfolios are balanced.

Some developers, sitting on a pile of cash, are also taking this opportunity to hunt for distressed assets they could pick up at bargain prices. 'I am still looking to buy in those markets (China and Vietnam) but only if the price is right,' a developer told BT. If smaller developers are forced to sell because of refinancing or other issues, bigger companies could buy assets and wait for the market to turn around, he said.

CapitaLand shared the view. With its strong balance sheet, the developer is in a very good position to take advantage of the current market to continue to expand selectively in China and Vietnam, it said.
Posted by Richard Yeo at 7:37 PM No comments:

US Crisis 'Harder To Fix'

BANGKOK - THE root causes of the financial turmoil in the United States are similar to the crisis that gripped Asia 11 years ago, but may be harder to fix, Thailand's central bank governor said on Saturday. 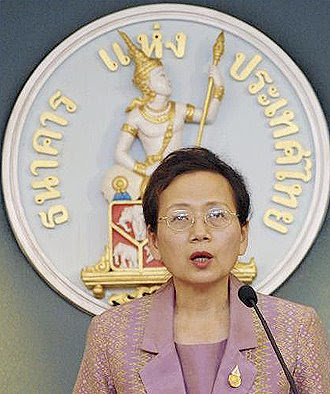 Bank of Thailand chief Tarisa Watanagase said central banks would need to be flexible in their response to the US crisis as its effects ripple around the world. -- PHOTO: REUTERS

Speaking to her Asian counterparts gathered in Bangkok for a weekend symposium, Bank of Thailand chief Tarisa Watanagase said central banks would need to be flexible in their response to the US crisis as its effects ripple around the world.

'At a glance, the root causes of both events are strikingly similar,' Dr Watanagase said in evoking memories of the 1997-98 Asian financial meltdown triggered by the devaluation of the Thai baht.

However, the crisis today is much more complex because it is unfolding in the world's biggest economy with the deepest and most sophisticated capital markets, Dr Watanagase said.

'Given the increased complexity and magnitude of the current crisis, this calls into question whether the tools at hand for policymakers are adequate in ensuring economic stability, the essence of our mission as central bank governors,' she said.

Dr Watanagase called for 'innovative methods to deal with the evolving challenges. For example, we may not be able to just rely on using traditional solutions of raising interest rates to address rising inflation.'

Policy responses may include 'prudential measures that could help cool down asset prices, which is a case in point of how monetary and supervisory policies can be intertwined', she said.

The South-east Asia, Australia and New Zealand (SEANZA) Governors' Symposium, a 3-day training seminar, was scheduled before the turmoil in the US banking system triggered panic selling on world stock markets.

US plan welcomed
Dr Watanagase welcomed the plan being drawn up by US authorities to buy the bad debt undermining financial firms.

It should be a better idea to resolve problems in US financial markets in a more sustainable and systematic manner, rather than dealing with them with piecemeal measures. But we still need to look at the details,' she told reporters.

The 20-member group includes the central banks of Japan, China, Australia, India and several South Asian and South-east Asian countries. It was set up in the 1950s to promote cooperation between central bankers in the region.

The collapse of investment bank Lehman Brothers and the US$85 billion (S$121 billion) US government bailout of insurer AIG this week have knocked Asian banking stocks and prompted central banks to pump funds into strained money markets.

Commercial banks in Asia have seen their shares caught up in the downdraft, but have largely dodged the huge credit losses that have rocked Wall Street.

Dr Watanagase said Asia in general had been little affected so far. 'Asian countries have cooperative arrangements in place for facing such a situation, such as currency swap arrangements and standby credits that each can take from the others,' she told reporters.

While the region has ample liquidity, the Asian Development Bank has warned that several asset markets, particularly real estate, were vulnerable to shocks and that big differences in the development of financial systems among Asian economies were a cause for concern. -- REUTERS
Posted by Richard Yeo at 6:37 PM No comments: 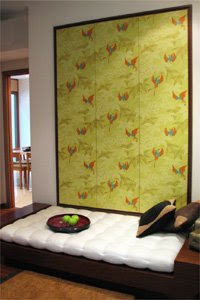 书房中选用了一张大书桌，表面上看，只有桌前一张椅子可供读书写字，细看之下，桌子背后的凸窗铺上坐垫，桌子的高度与凸窗成比例，同一张书桌因此可以同时供两个人用。
Posted by Richard Yeo at 6:14 PM No comments: