Asian property investment sales slumped 83 per cent quarter-on-quarter in the first three months of 2009 as risk appetite remained weak and the gap between buyer and seller expectations continued to deter activity, according to a report by CB Richard Ellis (CBRE). 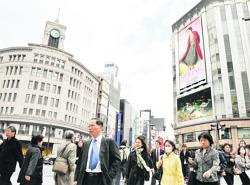 The industrial property sector suffered the largest drop by market segment, plummeting 95 per cent from the same quarter a year earlier. Office transactions sank 89 per cent, while retail transactions shrank a much smaller 40 per cent.

However, there was a noticeable improvement in sentiment in some key markets in March, as the rate of economic decline appeared to ease, CBRE notes.

'The overall property investment market in Asia was generally subdued and remained in a prolonged state of price discovery,' its report says. 'The period was characterised by isolated and small investment transactions across certain markets.'

The largest transaction in Q1 was the sale of the Sogo Department Shinsaibashi Store building in Osaka - which has retail space - for US$383.6 million.

Although cash rich investors continued to be interested in acquiring quality assets for the long term, the credit crunch, uncertainty over market direction and a significant gap between asking prices and what buyers are willing to pay put a dampener on activity.

Nevertheless, CBRE notes that a number of new funds were established in Q1 2009 to capitalise on opportunities arising from the current distressed market - a trend first noticed in Q3 and Q4 2008.

In Hong Kong, institutional investment activity evaporated as investors in Q1 this year continued to find it difficult to raise debt and equity.

However, commercial banks gradually relaxed their requirements on property lending and lower their mortgage rates during the quarter as interbank liquidity increased after several rounds of government intervention.

Driven by these two factors, the number of investment deals under HK$100 million (S$18.8 million) picked up considerably towards the end of the quarter, as did demand for new residential housing units.
Posted by Richard Yeo at 11:30 PM No comments:

While the agency leased or rented out 10,800 sqm of such space, companies returned 19,700 sqm, resulting in a negative net allocation of 8,900 sqm.

A large decline in the amount of space leased or rented out accounted for the poor showing in Q1. The gross allocation of 10,800 sqm fell 46 per cent quarter-on-quarter and 64 per cent from Q3 2008.

Support industries in logistics, services and construction together accounted for the bulk of terminations, at 53 per cent. The precision engineering industry also fared poorly, making up another 26 per cent of terminations.

Despite falling demand for ready-built factory space, an even larger decline in supply helped push occupancy rate marginally higher to 97.7 per cent in Q1 from 96.8 per cent in Q4 2008.

Retirement of flatted factory space scheduled for redevelopment contributed to the smaller supply.

'Things are still slow' for many industries, said DBS Vickers analyst Derek Tan. Nevertheless, there is a sense of 'improved optimism'.

Just yesterday, Citi economist Kit Wei Zheng adopted a less bearish stance and adjusted his GDP forecast to minus 5 per cent for 2009, up from minus 6.4 per cent previously.

Compared with a year ago however, the situation still appears weak. Net take-up of prepared industrial land was 114.9 ha in Q1 2008 - more than seven times that in Q1 this year.

In Q1, gross allocation of space more than doubled from the previous quarter to 30.8 ha. The increase more than offset a smaller rise in terminations, which amounted to 15.5 ha in the quarter.

Thirteen companies returned prepared industrial land to JTC in Q1 - nine which previously occupied generic land and four which were from wafer fab parks. Electronics and precision engineering industries contributed to more than half of the terminations.
Posted by Richard Yeo at 11:22 PM No comments: