WELL-HEELED banking customers, with properties in Singapore and abroad, are being offered a first-of-its-kind product by Citibank Singapore.

The product, launched yesterday, allows these affluent types to consolidate their mortgage financing on residential properties held here and abroad into an all-in-one overdraft that they can use at their convenience.

These clients are Citigold Select customers - who have liquid assets of at least $1 million - and have properties in multiple countries.

Citi says the key benefit of the product is that these clients have a single point of contact, which allows them the speed to act as and when they need investment funds.

This is even more important in the current volatile market, where attractive opportunities are expected to surface.

'These individuals understand the value of having a consolidated line of credit and a single point of contact, both of which go towards facilitating timely investment decisions,' said Citi Singapore's head of commercial markets, Mr Tan Chia Seng

Citibank's clients can use a range of currencies, such as the Singapore dollar, US dollar, Australian dollar, Hong Kong dollar, euro, Japanese yen, British pound and Swiss franc. They can also switch currencies seamlessly.

Currently, the product is available only in Singapore and for properties in six markets - Singapore, Malaysia, Hong Kong, Australia, Canada and Britain.

Up to 70 per cent of the value of each property in these markets can be aggregated into the overdraft facility.

Citi Singapore's head of consumer markets, Mr Anil Wadhwani, said the product offers ease, speed and convenience from a single window, since clients need only speak with one officer here for all their properties, instead of different ones in different markets.

Mr Tan said the product evolved from client's feedback and that they have worked on it for a year.

Fewer Cluster Homes May Be Built

CAP ON UNITS IN EACH ESTATE

But congestion will be reduced and newer units can be bigger 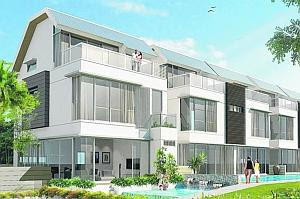 Developers are likely to build fewer cluster estates like this one in Whitley Road when the URA reinstates an old rule next year. Whitley Villas, which was launched in April, features two bungalows and six semi-detached homes sharing common facilities. -- PHOTO: SAVILLS SINGAPORE

The Urban Redevelopment Authority (URA) is reinstating an old rule early next year which analysts expect to leave developers less inclined to build the homes.

The main reason for the move is that developers have tended to cram as many of these homes onto a plot as possible.

This has led to congestion, and a deterioration of the environment of these developments, which are landed homes with strata titles and common facilities, URA said.

Such homes have gained in popularity in recent years as they combine the appeal of conventional landed homes with condo-style facilities such as swimming pools, playgrounds and security.

But from Feb 3 next year, developers will be permitted to build fewer strata landed units in a given development than under current laws although these units may be larger.

In a circular released on Monday, the URA said it will re-introduce a cap to limit the number of allowable units in strata landed housing developments as such estates have become dense and congested.

This will be based on a minimum plot size per unit similar to that imposed for conventional landed homes.

Property consultants said the likely impact of the new rule is that developers would switch to building landed homes, since they would now be able to build fewer strata landed homes on a given plot.

As for strata semi-detached homes on the same plot, a developer can build up to 72 units under existing rules and up to 50 units that are 45 per cent bigger in size under the new guidelines.

The change is more pronounced for strata-bungalows. A developer which is currently able to build 60 units on a given plot will be able to build just 25 units under the new rule, though these units can be a whopping 2.4 times bigger.

If they choose to build strata homes, they are likely to consider only strata terrace homes as they can pack more onto the same piece of land, he said.

As such houses are set to be bigger, their absolute value will go up, he said. 'They will become less affordable.'

Currently, strata landed homes typically cost 10 to 20 per cent less than conventional landed homes, he said. But the gap will close under the new guidelines.

Strata landed housing was introduced in 1993, with the same control that will be re-introduced early next year. This was lifted in 2001 - except for strata bungalows proposed within exclusive Good Class Bungalow areas - to allow the industry greater flexibility in design and to promote self-regulation, URA said.

It is reinstating the control as a focus group consultation last year found that the quality of the living environment in strata landed estates has deteriorated as houses within the strata landed development are packed very close together to maximise the number of units.

'Landed housing residents living nearby now have to deal with heavier traffic into the estate and a more congested environment due to the large number of strata landed housing units being built,' URA said in its circular.

Between 2003 and this year, about 100 strata landed housing projects were approved, according to its data.

URA also said it had received complaints from residents of landed housing estates of the increasingly dense environment caused by some new strata landed housing developments.

It said strata housing will still be an attractive option as there is enough flexibility for creative layouts and developers can save on land, which would be required for public parks and roads if the site was for conventional landed housing.
Posted by Richard Yeo at 7:48 PM No comments:

The share of profit of associated companies was higher in the third quarter of 2008.

The increase was attributed to the share ofprogressive recognition of profit from the sale of units in one north residences and Nassim Park Residences and better performanceby Marina Centre Holdings Pte Ltd which owns Marina Square.

The increase in revenue came largely from the progressive recognition of revenues from the sale of thegroup's development properties including those from Panorama and Breeze by the East which were launched earlier this year.

Revenue from property investments also improved due to higher average rental rates for the group's investment properties andcontribution from the Pan Pacific Serviced Suites which opened in April 2008.

The group saw an increase in borrowings which was used principally for the purchase of the land parcel at Simei Street 4 and the property at Spottiswoode Park Road. As a result, the group's net debt equity ratio increased from 23 per cent as at 31 December 2007 to 40 per cent as at 30 September 2008.
Posted by Richard Yeo at 7:43 PM No comments: