Private home prices in Singapore came in weaker than expected for the third quarter, dropping by 2.4 per cent - worse than an earlier estimate of 1.8 per cent. The quarter-on-quarter drop was the first decline in more than four years. 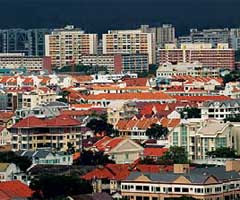 Data from the Urban Redevelopment Authority (URA) showed prices fell across the board, with prices for high-end homes in prime areas seeing the biggest drop of 2.7 per cent.

Analysts said there has not been panic selling yet, but they expect prices to drop by about 3 to 5 per cent in the quarters to come.

Donald Han, managing director of Cushman & Wakefield, said: "We don't know what's going to happen in the next 2 to 3 months. There will be people who've been affected by the stock market (declines), who might be late in their payment, and that might eventually translate to more pressurised selling."

The mass-market and mid-tier segments, which have shown some resilience in previous quarters, have also not been spared.

Prices for mass-market homes fell by 1.5 per cent, while those for the mid-tier segment declined by 2.4 per cent.

Some property consultants said developers may choose to launch their projects before the market gets worse.

Tan Huey Ying, Colliers International's director for research & advisory, said: "Now that the market is firmly on a downward path, I think there are some developers who may take this opportunity to launch their projects instead of waiting for prices to drop even further.

"On the other hand, there might be some developers with strong financial standing who may want to continue to develop their properties, but launch at a later date when the market recovers."

Sub-sales accounted for about 11.6 per cent of all sales transactions in the third quarter.

Ms Tan expects this segment to hold steady for the next six to nine months. And it is likely to be dominated by purchasers for properties that are nearing completion or speculators who opt to take profit now.

Rentals of private residential properties also fell in the third quarter, dropping by about one per cent.

Meanwhile, Housing and Development Board (HDB) data showed prices of resale flats rose by 4.2 per cent in the third quarter compared to the previous quarter. - CNA/yb/ir
Posted by Richard Yeo at 9:14 AM No comments: 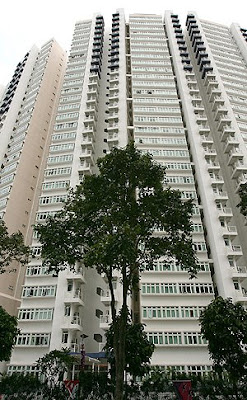 Singapore releases advance estimates on property prices shortly after the end of each quarter based primarily on transactions during the first 10 weeks of the period. -- PHOTO: THE BUSINESS TIMES

Data released by the Urban Redevelopment Authority on Friday showed that prices slipped by 2.4 per cent. This compares with an initial estimate of 1.8 per cent that was released earlier this month and a 0.2 per cent rise in the previous quarter.

Rentals of private homes, too, fell in the third quarter. The fall was at 0.9 per cent, compared with a rise of 2.5 per cent in the second quarter.

The HDB resale flat market, however, continued its upward push in the third quarter. Prices rose 4.2 per cent, compared with a 4.5 per cent rise in the second quarter.

Resale transactions also edged up 4 per cent to 8,110 cases.

But, reflecting the softening of the property market, the cash-over-valuation (COV) amount of HDB resale transactions fell to $19,000 in the third quarter, from $20,000 in the previous three months.

Cases requiring COV made up 89 per cent of all resale transactions in this quarter, with 11per cent conducted at or below valuation, said an HDB statement on Friday.

Given the weaker global outlook, property consultants are expecting home prices to continue to weaken in the last quarter of the year and 2009.

The fall in private home prices in the three months to Sept marked the first decline in four years amid concerns over the worsening global financial turmoil and coincides with the economy?s descent into recession during the quarter.

News of further weakness in the property sector extended the losses on the Singapore stock market, with the benchmark Straits Times Index falling by over 7 per cent on Friday to a five-year low, in line with the slide in regional markets.

The country's top two property developers CapitaLand and City Developments both fell over 7 per cent, after government data showed third quarter home prices fell a bigger-than-expected 2.4 per cent from the previous quarter.
Posted by Richard Yeo at 9:12 AM No comments:

Private Property Prices Down 2.4% In Q3

The official private home price index slipped 2.4 per cent cent in the third quarter compared with the preceding quarter, according to latest data by Urban Redevelopment Authority (URA) on Friday.

'Prices of private residential, office, and shop properties decreased by 2.4 per cent, 3.9 per cent and 0.3 per cent respectively in the Q3 2008 while the prices of industrial properties increased slightly by 0.9 per cent in the same period,' URA said.

'Rentals of private residential, office and shop properties decreased by 0.9 per cent, 0.8 per cent, and 0.6 per cent respectively in the 3rd Quarter 2008, while the rentals for industrial properties increased slightly by 0.1 per cent in the same period,' URA said.

In the public housing segment, Housing & Development Board's resale flat price index rose 4.2 per cent in Q3 over the preceding quarter, lower than the 4.5 per cent quarter-on-quarter gain seen in Q2. The total number of HDB resale applications registered rose by 4.5 per cent, from 7,763 cases in Q2 to 8,112 cases in Q3.

Overall median sublet rents for HDB flats rose slightly in Q3. However, subletting transactions fell about 4 per cent from about 4,120 cases in Q2 to about 3,960 cases in Q3. The total number of HDB flats approved for subletting rose to about 21,400 units, compared to about 20,200 units in Q2.

For HDB's news release:
http://tinyurl.com/64uzul
Posted by Richard Yeo at 9:09 AM No comments: