SINGAPOREANS are less likely than most of their Asia-Pacific neighbours to cut spending on property and renovations, according to a MasterCard survey.

The MasterCard Worldwide Index of Consumer Purchasing Resilience measures the resilience of planned expenditure categories to cutbacks, with zero the most vulnerable and 100 the most resilient.

In the property and renovation category, Singapore had a resilience score of 77.

The index looked at the categories of goods and services that consumers will spend on in the next six months, their importance to consumers and whether consumers will cut discretionary spending.

In Singapore, the fitness and wellness segment had the second-highest resilience index score of 73, followed by personal travel at 59. Dining and entertainment had a score of 54, while fashion and accessories rated 49.

Like most of the markets, Singapore failed to register a score in the consumer electronics category, since a market response of less than 30 per cent was not counted. Of the 14 markets surveyed, only Indonesia at 59.9 and Vietnam at 58.2 generated resilience index scores for consumer electronics.

'There is a high rate of home ownership in Singapore and house-proud consumers here will continue to spend on renovations and property category, to finance their mortgages and spruce up their homes,' said Yuwa Hedrick-Wong, MasterCard's economic adviser (Asia-Pacific).

'Spending on fitness and wellness has become increasingly important, especially for younger and better educated consumers and, therefore, it is not surprising that this category has emerged with a high resilience score,' he said.

As far as general purchasing is concerned, Singapore's average resilience index score of 62 trailed the Asia-Pacific average of 67. In comparison, China's score of 81 was the highest, while Japan was second with 76. Indonesia and India tied for third with 74.

'In general, the spending priorities of Chinese and Indian middle-class consumers are relatively resilient, showing their disposable income has so far remained healthy,' Dr Hedrick-Wong said.

The survey polled 6,000 consumers, about 400 of whom were from Singapore.
Posted by Richard Yeo at 11:27 PM No comments:

Singapore's economy shrank more than expected in the fourth quarter, prompting the government to declare the nation was in its worst ever recession and fanning expectations that the central bank will let its currency weaken.

The Singapore economy shrank in the fourth quarter at a seasonally adjusted, annualised pace of 16.9 per cent, deeper than advance estimates of a 12.5 per cent contraction, detailed government data showed on Wednesday.

The government said it now expected Singapore's economy to contract between two and five per cent this year, slashing its forecast further from an already downgraded outlook of a range of minus 2 per cent to plus 1 per cent published just three weeks ago.

'The Singapore economy is going through its sharpest, deepest and most protracted recession,' the Ministry of Trade and Industry's second permanent secretary Ravi Menon said at a media briefing.

Singapore's central bank said on Wednesday that its monetary policy stance of zero appreciation in the Singapore dollar announced last October was intact and it had no plans to review monetary policy ahead of a scheduled policy meeting in April.

'I'm bearish for the Singapore dollar. It's worse than I expected,' said Irene Cheung, currency strategist at Royal Bank of Scotland in Singapore.

'I expect monetary policy to remain accommodative - they should have recentred the band earlier, but they might still do it - the sooner the better.'

Singapore manages monetary policy by adjusting the value of its currency relative to those of its main trading partners in an undisclosed band. The Singapore dollar stood at 1.5037 against the US dollar by 0050 GMT, compared with 1.51 before the data.

The government expects key non-oil domestic exports will shrink 9-11 per cent this year, while total trade, which includes entreport activities, may plunge 17-19 per cent.

From a year ago, fourth quarter gross domestic product, or the value of all goods and services produced in Singapore, fell 3.7 per cent following a drop of 0.2 per cent in the third quarter.

The government said manufacturing output in the fourth quarter shrank 10.7 per cent from a year earlier, while services contracted 0.1 per cent. -- REUTERS
Posted by Richard Yeo at 11:23 PM No comments:

SINGAPORE, which is facing its 'sharpest, deepest and most protracted recession' from the fast-deteriorating global economy, further revised its GDP growth forecast on Wednesday to between -5 per cent and -2 per cent this year. 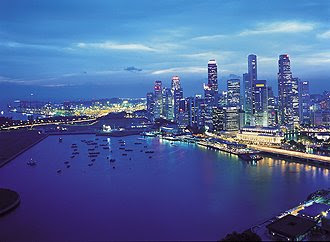 Singapore will unveil this year's budget plan tomorrow, as it attempts to speed up aid to companies hurt by the global recession and minimise job cuts. -- PHOTO: URA

This is lower than the -2 per cent to 1 per cent growth range it had forecast on Jan 2. The economy grew 1.2 per cent last year, less than earlier estimated.

A 5-per-cent slump this year would be the worst-ever on record.

The Ministry of Trade and Industry (MTI) said the downward revision was mainly due to worst-than-expected decline of the world economy and its 'much stronger' spillover into the region's economies.

Mr Ravi Menon, MTI's second permanent secretary said: 'What took us by surprise ... is the depth of the deterioration in global economic activity and, second the spillover it has on the region and Singapore.

'Typically you do not see this kind of collapse in trade so early in the cycle.'

Preliminary data showed that the Singapore economy grew 1.2 per cent last year compared with 7.7 per cent in 2007.

GDP shrank by 3.7 per cent in the fourth quarter - worse than the 2.6-per cent drop in the advance estimate.

It also plunged about 16.9 per cent last quarter from the previous three months - more steep than the 12.5 per cent retreat in the flash estimate and the largest quarterly decline on record.

The manufacturing sector is estimated to have shrank by 4.1 per cent, down from an expansion of 5.8 per cent in 2007.

Several clusters - electronics, precision engineering, and chemicals - were affected by the rapid decline in demand in Singapore's key export markets, especially in the final quarter of 2008.

Total trade rose 9.6 per cent to $928 billion last year, but is tipped to slump by between 17 and 19 per cent this year - down from the previous forecast of a 6-8 per cent drop.

Non-oil exports are expected to dip between 9-11 per cent, compared to the previous forecast of between -1 and 1 per cent.
Posted by Richard Yeo at 11:10 PM No comments: