LAGUNA Park condominium along Marine Parade Road could be up for collective sale, with about 77 per cent of tenants so far agreeing to it, Channel NewsAsia reported.

The sales committee could expect a few more signatures in the coming days to cross the 80 per cent trigger point which will move the en bloc process forward. Channel NewsAsia understands that the asking price is about $1.2 billion. Each owner stands to pocket between $1.8 million and $2.1 million. It works out to about $633 per square foot of gross floor area, Channel NewsAsia said.

Nicholas Mak, director, consultancy and research, Knight Frank, said: 'In today's market, the owners will probably have to lower their expectation, easily by 20 per cent.'

United Engineers'(UE) Park Central @ AMK, which was launched in July, is now more than 70 per cent sold at an average price of $500 psf. 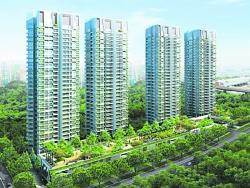 Mostly sold: All the four-bedroom and penthouse units in the 578-unit development have been sold with only five-room units left

UE managing director of integrated facility management and property development business David Liew said that all the four-bedroom and penthouse units in the 578-unit development have been sold with only five-room units left.

Mr Liew added: 'Now that the bulk of the units has been sold, our next goal is to make sure we deliver a quality home, and on time, to our customers.'

Park Central @ AMK is expected to get TOP (temporary occupation permit) in mid-2011.

The Housing and Development Board (HDB) scheme, which allows private developers to sell homes under HDB terms, was first announced in 2005.

UE says that since the launch in July, Park Central @ AMK received more than 2,300 applications. Its showflats also saw more than 23,000 visitors in the first two weeks.

A spokesman for UE added that most of the buyers have opted for HDB loans.

On Nov 14, it was reported that Natura Loft received about 600 applications for 480 flats a day before the close of applications.
Posted by Richard Yeo at 11:08 PM No comments:

The weak property market sentiment and tight financing have combined to compress the total investment sales of Singapore real estate to just $17.8 billion, year-to-date. This is a third of the record $54 billion achieved for the whole of last year, according to CB Richard Ellis data. 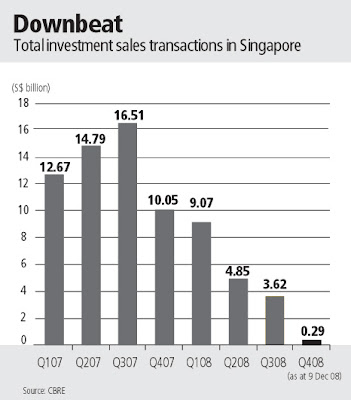 Just $290 million of investment sales have taken place in Q4 this year (up to Dec 9).

Investment sales are a gauge of developers' and investors' medium- to long-term confidence in the property sector.

CBRE defines such deals as transactions with a value of at least $5 million, comprising government and private sales of land and buildings (both strata and en bloc). It also includes change of ownership of real estate via share sales.

Market watchers are not upbeat about the investment sales climate in the near future. CBRE forecasts the tally for next year could come in at a modest $5-10 billion, a level last seen in 2004.

CBRE executive director Jeremy Lake says: 'With market uncertainty and economic risks appearing to be on the downside, many investors will remain on the sidelines of the property market, waiting for signs of price stabilisation before investing. With the global economy likely to enter a protracted downturn on the back of the deepening financial crisis, transaction volumes in property are expected to remain low over the next few quarters.'

Agreeing, DTZ senior director Shaun Poh says: 'I would not be surprised if we don't see any major transactions for the next three to six months. Potential investors are waiting for property prices to come down. Even property funds that have raised money can't make acquisitions because of the difficulty of raising the debt component to pay for the purchase - despite trying to source for financing in overseas markets like Hong Kong and London in some instances.'

'In addition, cheap investment opportunities may arise in other asset classes, diverting capital away from property,' he added.

The property consultancy group's quarterly breakdown of investment sales shows that they have been sliding since Q3 last year, when a whopping $16.5 billion of deals were sealed. The performance in each quarter of this year has been lower than the corresponding periods of 2007, sliding to $290 million this quarter.

The collective sales market was dormant as developers remained mindful of the lukewarm response to new residential launches, rising construction costs and tighter credit measures, CBRE observed. Only seven collective sales worth a total $371 million have been sealed so far this year, against the record $12.4 billion from 111 transactions in 2007.

Office investment sales of $5.4 billion so far this year are 62 per cent below the $14.3 billion for full-year 2007. Ongoing turmoil in the global economy contributed to further deterioration in business sentiment, which subsequently had an impact on the office leasing market and capital flows in the local office sector.

'This resulted in no major en bloc office transactions in the second half of 2008. Hence, the office investment market is expected to remain quiet in the next few months,' CBRE said.

Bucking the trend was the industrial property sector which contributed $3.32 billion of investment sales deals this year, 66 per cent higher than last year and also the best showing since 2002. About half of the tally for this year was accounted for by JTC Corporation's $1.7 billion divestment of its industrial portfolio to a joint venture involving Mapletree Investments, Arcapita and Mapletree Industrial Fund.
Posted by Richard Yeo at 11:07 PM No comments:

BEIJING - China's property outlook index, which covers price and investment trends in the sector, fell to 98.46 in November from 99.68 in October and 101.15 in September, the National Bureau of Statistics said on Friday.

The floor area of residential properties sold in the first 11 months of the year was down 18.8 per cent from a year earlier, while their sales value was down 20.6 per cent, the bureau said on its website.

The property outlook index distils trends in investment, prices, and supply and demand in the real estate market into a composite figure representing the sector's overall health.

A reading above 100 indicates positive or improving conditions, while one below 100 indicates negative or worsening ones. -- REUTERS
Posted by Richard Yeo at 11:05 PM No comments:

PRICEY condo-style HDB flats have not been spared in the property downturn, going by what has been left for sale at Park Central @ AMK.

These levels put the flats in the same price bracket as older condominiums, which might prompt some potential HDB buyers to turn to the private home market, where prices are falling.

Developer United Engineers announced the figures yesterday, and also said foundation works had begun at the Ang Mo Kio estate, which is being developed under the HDB's design, build and sell scheme (DBSS). Under the scheme, public flats are designed, built and sold by private developers.

Sales at Park Central have been favourable in view of the challenging economic climate, said Mr David Liew, the managing director of the group's integrated facility management and property development business.

Buyers include young couples, retirees and those with proceeds from collective sales, the group said.

The DBSS concept has been quite popular, but some experts fear the fall in private condo prices could leave buyers spoilt for choice.

Price is the key factor in DBSS projects as they are targeted at HDB buyers whose household income must not exceed $8,000 a month.

'It's a price-sensitive sector. These buyers can choose between HDB flats and lower-end condos,' said Associate Professor Sing Tien Foo, the deputy head of the National University of Singapore's real estate department.

'During a downturn, the price gap between these segments will narrow, so demand (at DBSS projects) may be affected,' he noted.

Most DBSS flats are priced at $500,000 to $700,000 each, roughly the level for executive condos, said ERA Asia Pacific associate director Eugene Lim. 'There is already an overlap.'

When the property market was rising in 2006, DBSS products met the needs of buyers who could not afford private homes.

The first such project, Premiere @ Tampines, was an instant hit, drawing 5,700 applications for 616 homes in late 2006. Although it sold only 500 flats initially, long queues formed when the remaining units were released for sale.

City View @ Boon Keng received 3,500 applications for 714 flats early this year, but only 460 were sold. Nearly 90 per cent of the flats have since been taken up, including all the three-roomers.

Once prices go above $600,000, the flats will be competing with old leasehold condos, executive condos and bigger executive flats, said Knight Frank's director of research and consultancy, Mr Nicholas Mak.

Unlike exec condos, which are initially subject to sale restrictions similar to those on public housing units, but become fully private after 10 years, a DBSS unit is just a value-added HDB flat, he said.

Indeed, demand for DBSS flats might be more severely affected than that for other segments as potential buyers have more choices, said Dr Sing.

The problem is that most developers of DBSS sites bought them in good times.

There are two DBSS projects slated for launch in the first half of next year: one in Simei and a huge project of nearly 1,200 units in Toa Payoh.
Posted by Richard Yeo at 11:02 PM No comments: