IN TOUGH times, small is beautiful.

That seems to be the new theme among some developers who are tearing up plans for yet-to-be-launched projects and going back to the drawing board.

They are looking at reconfiguring their residential projects to offer smaller units than planned, so that they would be more affordable for cautious buyers.

This is a major reversal from the boom times when big units were very popular.

In its recent results statement, Sing Holdings said it is reconfiguring the unit sizes and layout of its prime Cairnhill Road project, The Laurels, to adapt to market demand.

'The plan is to have more one- to two-bedroom units,' said managing director Lee Sze Hao. 'Now, I have to be careful with the affordability factor.' He would offer 'luxury at a affordable price'.

Wheelock Properties said in its results statement that it is reviewing building plans of its Ardmore 3 project in view of the poor market.

cess, it is considering resizing the units of its Green Meadows project in Upper Thomson to make them more affordable.

The impetus for this emerging trend includes the recent stunning sell-out of the Alexis project, which showed that small, affordable units sell. Of its 293 units, 114 units are one-bedders of just 366 sq ft to 527 sq ft.

Before its launch, developer ECPrime said it had adjusted the mix so that a larger number of the units would be smaller and therefore more affordable. Prices started from $450,000 for the one-bedders to about $650,000 for two-bedders.

It was only in 2005 and 2006 that developers were busy looking at building spacious units to cater to the rich. By late 2006, the bigger flats had attracted such strong interest that they were fetching higher prices on a per sq ft basis than smaller units. Traditionally, the bigger the unit, the lower the psf price.

In 2006, Lippo Realty executive director Thio Gim Hock banked on selling fairly big units at its 91-unit Newton One development. It was a success. 'When the market is good, people go for big units,' he said. Now, he has moved fast to reconfigure the units at the posh project on the prime Angullia Park site, where The Parisian used to be. It will now have two units per floor, instead of one unit per floor.

'Last year, we changed our plans. We want to keep it affordable,' said Mr Thio, now chief executive and group managing director of Overseas Union Enterprise. 'We foresaw that the market will go for smaller units.'

Mr Lee said he started reviewing plans for The Laurels late last year. It will be several more months before the approvals come in and it is ready for launch.

'Things have changed. It is better to change from business class to economy class now. It is important to build something the market can absorb,' he said.

'Gone are the days when these people just walk in and pay you $7, $10 million. Unit sizes have to be scaled down but still remain at a comfortable level.'

The original plan was for The Laurels to have 150 units, many of them three- to four-bedders. Now, it will have about 290 units.

More developers may follow suit, given the downturn. Said DTZ executive director Ong Choon Fah: 'People look at the lump sum now. The perception is that there is a smaller capital outlay.'

Mr Lee and Mr Thio both believe developers still able to reconfigure project layout and unit sizes will want to do so now.

Added Knight Frank executive director Peter Ow: 'If the developers have not started selling or building their projects, it would make sense for them to look at resizing the units to make them more affordable, provided it does not affect their planning approvals.

Mr Tai Lee Siang, president of the Singapore Institute of Architects, said: 'If poor economic conditions persist, the trend is likely to be downsizing of units to make them more affordable. The other trend may be the no-frills approach, where units are made simpler and cheaper to build - thus lowering costs.'
Posted by Richard Yeo at 11:44 PM No comments:

Interest Absorption Scheme Gains Popularity But Not All Buyers Satisfied 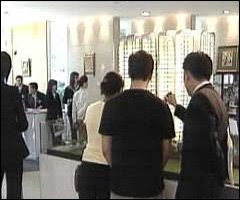 One of the schemes is the Interest Absorption Scheme (IAS). It sees developers paying the interest on home loans instead of buyers, until the project receives its Temporary Occupation Permit (TOP).

It is similar to the Deferred Payment Scheme which the Singapore government scrapped last year.

The IAS has gained popularity as it helps buyers manage their cashflow and can even result in cost savings. But some purchasers say they are surprised by an indemnity clause included in the scheme.

One homebuyer, who chose to remain anonymous, is worried about the consequences should developers fail to pay the interest.

"We already took a bank loan. And in the bank loan's terms and conditions, there is an indemnity (clause) already. So why is there a need to sign another form which basically relieves the developer from paying interest?"

But experts say the risks are low.

"The IAS amount is so negligible in the overall cost of the project and I don't think any reputable developer is going to not oblige the conditions. (This will) have a greater impact on their future launches."

Most developers charge a three per cent premium for the scheme, although some have chosen to waive this, which means cost savings for buyers.

PropNex's CEO said: "If a developer has only one price list... I will strongly recommend you seriously consider IAS, because there will be indirectly some cost savings in the interest until TOP. But before that, you may also want to check with the developer - are there any kinds of special discounts or anything if you're not taking IAS."

He added that if the developer has already factored the IAS into the pricing, then it can work out to be a good deal for buyers. - CNA/yt
Posted by Richard Yeo at 11:41 PM No comments:

Some want original buyers to indemnify them from sub-sale problems; Controller of Housing says such a clause is wrong

SOME developers are getting so “kiasu” (afraid to lose out) that they are getting the original buyers of homes to indemnify them should a sub-purchaser fail to pay. However, the Controller of Housing has told at least one developer, Keppel Land, that this is wrong.

The issue was raised when the buyer of an apartment at Park Infinia at Wee Nam Road, just off Keng Lee Road, tried to sell the unit bought from KepLand. The developer had wanted the original buyer to not only be liable for breaches by the sub-purchaser, but also to ensure that property tax and maintenance bills are paid. Asked to sign such a form, the original buyer asked lawyers to look into its enforceability. The lawyers then wrote to the Housing Controller for advice.

In response to the law firm, the Controller of Housing said in a letter seen by Today: “We are of the view that requiring your clients to sign a Letter of Authority with the indemnity clause stated above is contrary to the intention of rule 16 of the Housing Developers Rules, which requires a developer to enter into a fresh S&P Agreement (Sale and Purchase) with the sub-purchasers on the same terms and obligations as the original purchasers. This will place the sub-purchasers in a direct contractual relationship with the developer and releases the original purchasers from their obligations under the original S&P Agreement.”

The Controller added: “We have therefore written to the developer to request that the indemnity clause be deleted from the Letter of Authority which your clients have been asked to sign and complete the sub-sale expeditiously.”

A KepLand spokesman said the matter had since been resolved between the company and the purchaser, and the offending clause taken out of the S&P agreement.

A lawyer-friend of the purchaser said: “The clause should never have been included in the first place. How can any purchaser keep tabs on the financial position of a sub-purchaser down the road?”

Sources said this was not first time that KepLand had asked original purchasers to sign the indemnity form. It also appears that other developers have asked their purchasers to sign similar forms or are keen to follow KepLand’s example.

“In the current climate where scores of purchasers are said to be defaulting on their mortgage payments, it’s not hard to see why developers have to resort to such measures to protect their own interests,” said a prominent developer.

Against a backdrop of rising business failures and unemployment, property industry observers think mortgage defaults could increase this year. As a result, banks have become stricter on their mortgage financing, especially for those buying second and third properties.
Posted by Richard Yeo at 11:40 PM No comments:

该公司指出，亚洲房地产市场中，2008年新加坡私人住宅价格下跌9％，2007年则是上升26％。香港房屋价格2008年下跌6％，第四季度下跌14％。菲律宾马尼拉马卡蒂区三房式公寓价格去年下跌2％。
Posted by Richard Yeo at 11:32 PM No comments: