THE volume of transactions of good class bungalows (GCBs) may have fallen along with other property sectors but values have not.

A GCB is one that sits on designated land no smaller than 15,000 sq ft. And according to an analysis by CB Richard Ellis (CBRE), there were 25 GCB transaction in the first half of 2008. 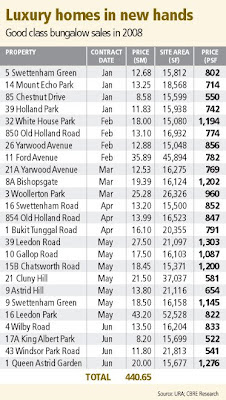 There are several explanations for this, including the possibility that bigger GCBs were sold this year, but it also seems clear that prices have risen.

Upon closer analysis, CBRE found that some of the GCBs sold in 2008 had already changed hands once before in 2007. For instance, a house at Fifth Avenue was sold for $17.4 million in June 2007 and then sold again for $19.7 million in March this year - representing a gain of about 13 per cent.

Another house in Cluny Hill was sold in January 2007 for $15 million, re-sold six months later for $20.2 million and then sold again in May this year for $21.5 million.

CBRE director (luxury homes) Douglas Wong says: 'There is still buying interest in the GCB market as it is always regarded as an attractive investment in the long term and/or for owner-occupation.'

This certainly seems to be supported by the fact that CBRE and Mr Wong handled possibly the biggest GCB deal ever done here - a house in Leedon Park which sold for $43.2 million in May, bought by a Singaporean.

That locals make up the bulk of GCB buyers is interesting as foreigners have been very much credited with bolstering the luxury non-landed sector. Mr Wong also believes that of the estimated 2,400 GCBs in Singapore, these are owned by a small pool of about 1,000 wealthy individuals, suggesting that many own more than one GCB.

In tracking GCB transactions, CBRE found that there were two recent 'peaks' in the sector. (CBRE defines 'peak' in terms of volume rather than price).

The first peak occurred in 1999, when 77 transactions were recorded after the property market bottomed out during the Asian financial crisis.

The second peak occurred in 2006 with 119 deals done following a protracted period of market stagnation from 2000 to 2004.

And as CBRE notes, luxury properties are often seen as a barometer of the health of the overall market. When there are signs of the market turning, GCBs and luxury apartments will reflect this first and post bigger gains ahead of the broader residential market.

So it is good news then that for the rest of the year, CBRE expects GCB prices to remain firm or even see a marginal upside.
Posted by Richard Yeo at 7:05 PM 2 comments: 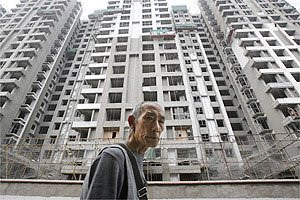