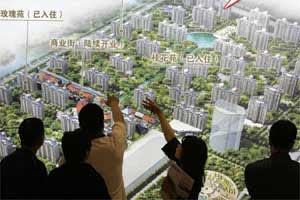 深圳中原地产预计，7、8月份将是发展商以套现为主要目的的集中推盘期，不排除8月奥运期间也会出现发展商开盘的情况。由于7月份楼市7月初日成交下滑到六七十套的低水平，因而7月底集中开盘的现象显示了发展商急于出货的心态。
Posted by Richard Yeo at 10:08 PM No comments:

This translates to a distribution per unit (DPU) of 5.19 cents, outperforming H1 2007 DPU of 4.23 cents by 22.7 per cent. The results were underpinned by Singapore's steady office demand, and exceeds the manager's forecast by 4.2 per cent.

'Given Singapore's attractiveness as a global city and tight office supply, we are confident of exceeding our forecast distribution per unit of 10.61 cents for the financial year ending 2008.' Richard Hale, Chairman of the manager said. -- BT Newsroom
Posted by Richard Yeo at 10:03 PM No comments:

CapitaCommercial Trust (CCT) has said that it is 'open to all options' when it comes to plans for Market Street Car Park (MSCP), and these include selling the site.

CCT had obtained outline planning permission from the Urban Redevelopment Authority to redevelop MSCP into an office tower for $1 billion to $1.5 billion.

In April, the trust said that it was evaluating the project's financial viability and funding structure, and would not decide on redevelopment anytime before mid-2009. It cited the project's significant size, rising construction costs, volatility in financial markets and the uncertain development premium as reasons for the deferment.

Responding to an analyst's query on whether CCT would consider selling MSCP instead, CapitaCommercial Trust Management Limited's (CTML) CEO Lynette Leong said that 'We are open to all options.' She pointed out that the development premium required remained uncertain, and construction costs have been increasing.

'If it makes sense to sell it, why not? We will not rule out that option,' said Ms Leong. -- Emilyn Yap, BT Newsroom
Posted by Richard Yeo at 10:01 PM No comments:

It offers $13.61m for industrial site; may build landed and/or flatted factories

SOILBUILD Group Holdings yesterday emerged as top bidder in a state tender for a 60-year leasehold industrial site at Woodlands, offering $13.61 million or $30.10 per square foot (psf) of potential gross floor area. This was almost 60 per cent above the next highest bid of $18.91 psf per plot ratio (psf ppr) from Zap Piling.

BT understands that Soilbuild may be looking at various permutations, including developing two or three-storey landed factories, a multi-storey flatted-factory/ramp-up factory development or a combination, depending on what best suits the market's needs.

Soilbuild has developed landed factories, each with its own backyard, in the Kranji and Pioneer Road areas. 'These are popular, especially among SMEs,' an industry player said.

Colliers International managing director (Singapore and North Asia) Dennis Yeo said: 'With construction costs at today's high levels, it may be a better option to build landed factories, even though this means Soilbuild will not be able to develop the maximum gross floor area allowed for the site. Landed factories are in greater demand.'

The plot is zoned Business 2, which means that it can be developed for a wide range of uses such as clean/light industry, general industry and warehousing.
Posted by Richard Yeo at 9:59 PM No comments:

Move will free up resources for integrated resorts, other key projects

With this move, the government is deferring a total of $4.7 billion worth of public sector construction projects to 2010 and beyond.

'The additional deferment will allow the existing construction capacity and resources to be channelled towards the timely delivery of some big projects such as the integrated resorts, Marina Business Financial Centre and the downtown MRT line,' said regulatory body Building and Construction Authority (BCA) in a statement yesterday.

Projects postponed in this round include the main building of the proposed Jurong General Hospital and upgrading works at schools.

Developers and analysts BT spoke to were hopeful that the government's response could help to slow down the increase in construction costs.

Construction costs shot up some 20 to 30 per cent in 2007. And in the first quarter of this year, building costs rose by another 3-5 per cent, Minister for National Development Mah Bow Tan said in a statement.

The building boom also means that contractors were in short supply, with some private developers here reporting difficulties in hiring contractors and sub-contractors.

The new postponements could therefore be helpful in keeping the sector on a more sustainable growth path, said Citigroup economist Kit Wei Zheng.

'Anecdotal evidence suggests that some contractors may have even refused to take up contracts, because of concerns that rising costs would wipe out initially projected profits or even result in losses,' he said.

However, there were some concerns that the reduction in government spending was coming at a time when the sector, and the overall economy, is seeing a slowdown.

'To some extent, given the downside risks to growth, one would have thought that perhaps the government may have contemplated boosting construction demand to shore up growth,' said Mr Kit.

But he added that with the sector suffering from capacity constraints, it is not clear that GDP growth would have received a significant boost even if the government had increased construction demand.

Chua Hak Bin, chief Asian strategist at Deutsche Bank Private Wealth Management, similarly pointed out that the outlook for the construction sector is 'not as rosy as it was a year ago'.

Before yesterday's move, the government had announced two rounds of construction postponements for public sector projects, in November 2007 and February 2008. Projects put off included the Ministry of Health's National Addiction Management Centre and part of the Changi Prison Complex.

For the whole of this year, construction demand is likely to come in within current estimates of $23-$27 billion, BCA said.
Posted by Richard Yeo at 9:57 PM No comments:

A new benchmark for retail rents on Orchard Road has been set at Ion Orchard with tenants paying a base rent of up to $80 psf per month. This is 60-80 per cent higher than the current average prime, first-storey Orchard Road rents. 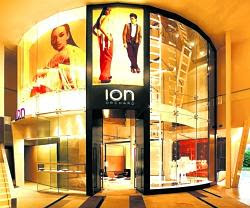 Opening next year: Sources say that $80 psf appears to be the new asking rent for prime space at other new malls including Orchard Central

Orchard Turn Developments CEO Soon Su Lin also revealed that Ion Orchard, a joint project of CapitaLand and Sun Hung Kai Properties, is now 50 per cent leased, with more than 30 per cent of the retailers setting up flagship stores.

'We have to-date, 45 confirmed new-to-market brands and newly created concepts by established operators,' she added.

Ms Soon was speaking at a press conference to announce its newest tenants as well as to reveal Ion Art - an art and design programme which will introduce new and multi-media art into the 'integrated mall experience'.

With less than a year to go before Ion Orchard opens, Ms Soon said that the construction is still on schedule. Ms Soon did not reveal a fixed date for completion, but said that the mall will open in time for retailers to showcase their Spring/Summer '09 collections.

While luxury retailers at Ion Orchard like Louis Vuitton and Prada are going to have to sell a lot of handbags and shoes to cover the luxury rents, sources say that $80 psf appears to be the new asking rent for prime space at other new malls including Orchard Central.

DTZ Debenham Tie Leung senior director (research) Chua Chor Hoon believes that while it appears that a new benchmark has been set, 'the $80 psf rental rate is likely to apply only for very prime shop units on the ground floor with good frontage'.

But Ms Chua did add: 'For a new mall like Ion, sitting on top of the MRT station and sitting at a busy junction, the average rent would be higher.'

Rents at Ion Orchard do start at $20 psf per month and this is likely to be for units at the basement levels, which will include F&B outlets and bridge brands.

Still, Knight Frank director (research and consultancy) Nicholas Mak says that even at $20 psf per month, some tenants, especially those in F&B, could find the going tough.

As such, Mr Mak notes that while the Ion Orchard is 50 per cent leased, 'Some could ask if the glass is half full or half empty'.

According to Knight Frank, current prime, first-storey rents are about $49 psf per month on Orchard Road and Mr Mak adds that only big luxury fashion and jewellery stores can afford rents at this level.

Mr Mak does, however, point out that not all retailers need to be location specific. 'Mid- and mass-market brands can go to any of the new malls coming up along Orchard Road. There will also be landlords competing for certain types of tenants.'

Ms Chua adds that retailers will need to weigh the pros and cons of where they choose to locate their shops. 'The positioning of the mall, variety and type of tenants, advertisements, events, promotions, layout and design concept of the mall will help to pull in crowds,' she says, adding: 'Tenants that require high shopper traffic will mainly be the ones who will not mind paying the higher rentals or a percentage of their turnover, if the traffic volume would translate into higher revenue for them.'
Posted by Richard Yeo at 9:53 PM No comments:

Govt Defers Projects Worth $1.7b

THE Government is deferring another $1.7 billion of public sector construction projects to ease pressure on red-hot building costs in the next two years.

This is the third time since November that public projects have been postponed amid high demand for building contractors and materials.

A total of $4.7 billion of public sector projects will now be pushed back to 2010 and beyond, the Building and Construction Authority (BCA) said in a statement.

'That's good news,' said the chief executive of property firm Overseas Union Enterprise, Mr Thio Gim Hock. 'Construction costs have more than doubled in the past year. It's hard to find contractors to bid for a job. When I tender, a lot of them decline because they are too busy.'

The latest move means projects such as the Jurong General Hospital will be deferred to 2010, although the hospital will still be ready and open as scheduled by 2015.

Other delayed projects include less urgent improvement works, but public housing and upgrading programmes will not be affected.

The move will allow construction resources to be used to ensure the timely delivery of big projects such as the integrated resorts, Marina Bay Financial Centre and the Downtown MRT line. Most should be finished by late next year.

The BCA also said that the resources freed up then can be used later for the deferred projects, ensuring a better spread of construction resources beyond next year.

Market experts said on average, costs have risen 20 to 35 per cent in the past year.

Mr Seah Choo Meng, executive chairman of construction consultancy Davis Langdon & Seah, was upbeat about the latest move. 'It will not bring costs down but it will lessen the pressure on existing resources.'

The total value of construction projects here is forecast at $23 billion to $27 billion this year, compared to $24.5 billion last year, and is set to stay high next year, BCA said. It is a far cry from 2003 and 2004, when the figure was just $10 billion.

'Construction orders will likely continue coming off, given a softening residential and commercial property market,' he said, adding that the Government may need to consider bringing forward deferred projects in a slowdown.

Some private projects, particularly residential, may also be delayed, said Mr Seah. 'While this year's rate of escalation in construction costs is expected to be in the double digits, it may be affected by the potentially weaker economic outlook in the region.'


Public projects put on hold
Some of the $1.7 billion worth of projects to be postponed:

Source: BCA
Posted by Richard Yeo at 9:43 PM No comments: