A recent classified advertisement in The Straits Times offered a five-room flat near Ang Mo Kio Hub for a whopping $50,000 below its valuation of $640,000. Another one was offering five-room flats in Jurong for $10,000 to $15,000 below valuation.

These days, there are more and more advertisements for resale Housing Board flats going for zero cash or below valuation.

Indeed, the cash-over-valuation (COV) portion of an HDB resale flat deal - this is the amount over and above the flat's valuation that is payable only in cash - is falling faster than ever since it peaked a year ago.

Typically, the more desirable a resale flat is, the higher its COV.

In the fourth quarter of last year, the median COV for all HDB estates fell 21 per cent to $15,000, compared with a 4.5 per cent to 5 per cent decline in the previous three quarters, according to recently released HDB data.

Today, the COV has already moved lower, agents said. Not only is less upfront cash needed for resale deals, it is now also fairly easy to land a deal without forking out any COV or even find a flat that is priced below valuation.

Recent HDB data shows that about 85 per cent of all resale deals done in the fourth quarter last year required COV, which is 4 percentage points less than in the third quarter.

Some bigger flats selling at or below valuation

If you are aiming for a deal that falls within the remaining 15 per cent - deals done at valuation or below - you will have a high chance of success if you choose a five-room or an executive flat, property agency heads said.

Many of the bigger executive flats, in particular, are priced at or below valuation.

HSR Property Group's executive director, Mr Eric Cheng, said his agent sold an executive maisonette in Bukit Batok about three weeks ago for $55,000 below the valuation of $460,000.

'The seller's valuation report was going to expire. If he were to do a new one, the value would be lower,' he said.

'Affordability is an issue as the quantum is very high,' he said. Not many HDB buyers can easily afford a flat that costs $500,000 or more.

Ironically, flats in 'hot' areas such as Tiong Bahru and Queenstown are commanding less COV now because their values had appreciated a lot, he said.

For instance, the median COV for five-room flats in the once-hot town of Bukit Merah, which reached $61,000 in the third quarter of 2007, has since slipped to $10,000 in the fourth quarter of last year.

As the market continues to weaken, buyers will want to pay less and less cash.

'What has happened lately is that people are resistant to paying high COV because valuation has gone up so much, easily by 20 per cent in the past year,' said PropNex chief executive Mohd Ismail.

'People are also a little hesitant to commit to a big monthly instalment because of such a gloomy economic outlook.'

Deals are now taking a little longer to close as buyers are negotiating harder, while sellers are taking longer to come to terms with falling COV, said ERA Asia-Pacific associate director Eugene Lim.

Given the weak economic outlook and the time lag between the private and HDB markets, there is no doubt that COV will continue to slide, with a bigger decline seen for bigger flats.

'Psychologically, people will avoid the bigger flats because the commitment is high,' said Mr Ismail.

In a downturn, demand for the smaller three- to four-room flats may also come from those downgrading from a private home, agency heads said.

Thus Mr Ismail is predicting that the overall median COV for bigger flats will easily drop to below $10,000 in the first half of the year, while the COV for the three- to four-room flats may drop only slightly.

Mr Lim said that as COV falls in general, HDB resale prices will also go down.
Posted by Richard Yeo at 11:49 PM No comments: 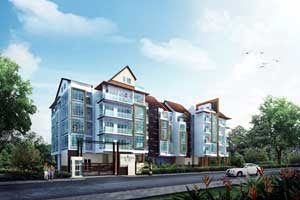 据了解，另一共管公寓，即星狮地产旗下的Caspian已经差不多准备就绪，只要市场条件许可，这个拥有712个单位的项目很可能会在2月份正式推出。
Posted by Richard Yeo at 11:41 PM No comments: