Developers Sell Close To 1,200 Homes In May

DEVELOPERS sold an estimated 1,200 private home units in May, according to market watchers. This is comparable to the 1,207 units they sold in April, based on official Urban Redevelopment Authority (URA) numbers. 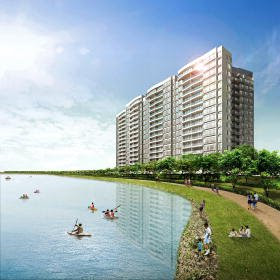 A BT survey across nine developers as well as some property agents yesterday already showed that some 1,130 units were sold last month. 'Developers could have easily sold about 1,200 units in May if you include all the smaller pockets of developments as well,' a seasoned residential property consultant estimated.

However, BT understands that some units may also be returned by buyers who may have got caught up in the home-buying frenzy fuelled by the stockmarket rally in the past few weeks.

Frasers Centrepoint sold a total 294 units in May - comprising 186 units at Martin Place Residences at Kim Yam Road, 46 at Caspian in the Jurong Lake District, 22 units at Woodsville 28, and 40 homes at Waterfront Waves.

BT eliminated the double-counting for joint-venture projects in arriving at the May sales tally.

City Developments reported total sales of 138 units (of which 97 units came from The Arte at Thomson and 36 units from Livia in Pasir Ris) in May.

Soilbuild is understood to have sold close to 90 units at The Mezzo in the Balestier location. In other developments, sales of around 30 units were seen for Kovan Residences and 21 units at BelleRive in Bukit Timah.

According to official government numbers, developers sold 1,332 private homes in February, followed by 1,220 units in March and 1,207 units in April.

Many developers have either re-priced or re-sized their units to make them more affordable.

Many people also feel that residential property prices have corrected substantially, she added.

'The thinking is: whether it's the bottom or not, probably the worst is over so it's about time to go in.'

With sales momentum gathering, developers have been gradually inching up prices for mass-market and mid/upper segment projects, following earlier price reductions from the 2007 peak levels.

However, pricing power is not expected to return to developers of luxury projects anytime soon. 'The price push in 2006-2007 period came from overseas buyers; this segment is still out of action,' a developer said.

A veteran developer observed that buyers now include those who had been sidelined by the rapid price surge in 2007.

Whereas the 2006/2007 residential property bullrun was substantially wealth-driven, with a strong element of overseas money, the current recovery in home buying has started in the mass-market and is now permeating to the mid/upper-middle segments, he added.

'So this is a traditional, bottom-up recovery, which is more sustainable. Upward price movements will be constrained by affordability at the end of the day,' he added.

DTZ's Mrs Ong too agrees that while there is 'cautious optimism' in the property market, developers are unlikely to raise prices significantly at this point in time.

Some developers may have lowered the level of discounts for projects that have sold well but they are doing this carefully.

'You don't want to derail the momentum that has been built up,' she said.
Posted by Richard Yeo at 10:16 AM No comments:

The unprecedented challenges of this unique project were overcome through pioneering features in the design and construction. The Straits Times takes a look at how these were achieved. 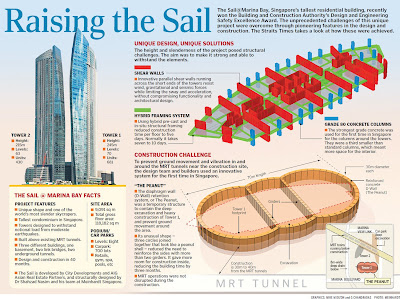 Units priced below $800,000 most in demand; resistance at higher levels

Buyers have been flocking to private apartments priced below $800,000 in recent months. Some may fork out a bit more, but with the economy still in the doldrums, most start getting cold feet when prices reach $1 million to $1.5 million. 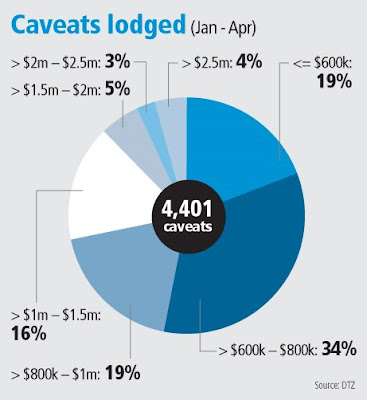 According to property consultancy DTZ, units selling for $600,000-plus to $800,000 were the most popular from January to April. In DTZ's analysis of 4,401 caveats captured by the Urban Redevelopment Authority's Realis system, 1,515 or 34 per cent were lodged for apartments in this price range.

Projects where plenty of recently released units were in the sweet price range include Double Bay Residences in Simei, Mi Casa in Choa Chu Kang and Waterfront Waves in the Bedok Reservoir area, DTZ said.

Savills (Singapore) has reached a similar conclusion from its own study of caveats - units below $800,000 have been most popular in the outside central and rest of central regions.

Even in the core central region, it has been possible to find smaller units for less than $800,000 - and buyers favour them. At The Mercury near River Valley, for instance, 27 of 38 caveats lodged (71 per cent) were for units priced below this level.

Anecdotally, buyers at recent launches seem to be more concerned about overall cost - smaller units with higher per sq ft (psf) prices have been selling faster than larger units with lower psf prices in some cases.

'Psf price acts as an impetus to generate interest and keenness or affinity to a certain location or a certain development, whereas quantum comes into play during the buying decision,' Ms Sengupta said.

With high-end property stirring in the past few weeks, could the resistance level be on the way up? Data is not available because it takes time for caveats to be lodged and captured.

But according to Knight Frank's director of research and consultancy Nicholas Mak: 'It appears so because more people are exploring the market.'

Still, he laced his observation with caution: 'This is often (due to) a bit of spillover from the stock market, which can be fairly volatile. It is also based on the expectation that the Singapore economy is going to recover year-end or so - but the government is not of the opinion.'

Announcing Singapore's first-quarter GDP figures recently, the Trade and Industry Ministry said there are still no decisive signs of recovery.

Of course, buyer resistance is unlikely to apply as far as the ultra-rich are concerned. DTZ's data shows 4 per cent of caveats in January to April were lodged for units worth more than $2.5 million. These include caveats for three apartments at Ardmore Park each worth more than $5 million. There were also caveats for 23 Gallop Gables units priced from $2.5 million to $4 million.
Posted by Richard Yeo at 12:03 AM No comments: