For those on a tight budget, EC units are an option to private flats

An executive condominium (EC) unit in Bishan was sold for a hefty $940,000 to a local buyer late last month. 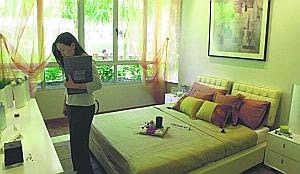 A showflat in Bishan Loft, a popular executive condo. A unit there was sold for $940,000 last month. But not all EC units can command that price. -- ST FILE PHOTO

'The buyer, a permanent resident, bought it after the Lehman Brothers collapse. She likes the location and the view from the high-floor unit,' said ERA agent Jacq Chong.

Ms Chong, who has brokered nine Bishan Loft deals at above $900,000 each since September, said buyers like the central location. The EC is within walking distance of Bishan MRT station.

ECs come with condo facilities but have sale restrictions similar to those for public housing. They were introduced in 1995 to bridge the gap between public housing and private apartments. The apartments are aimed at Singaporeans who can afford more than an HDB flat but may find private property out of their reach. New EC units can be bought only by households earning not more than $10,000 a month.

The Bishan Loft sellers who secured those healthy deals were lucky, as such transactions are no longer possible. 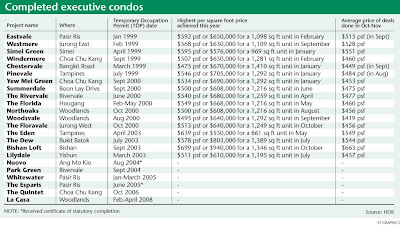 'Certainly, ECs are not crisis-proof,' said PropNex chief executive Mohamed Ismail, adding that EC unit prices could easily be affected by the downturn.

Indeed, two units at Bishan Loft were transacted in the past fortnight at $590 psf and $620 psf, said Ms Chong. 'Location is very important. Although prices at Bishan Loft have come down, its value should not be affected as much as the other ECs.'

Still, this would be bad news for sellers - but good news for buyers who might want to start looking and planning. Those with a smaller budget would be glad to know that not all ECs command the same prices as Bishan Loft.

There are 23 completed ECs in Singapore. Most are in outlying areas like Choa Chu Kang and Woodlands, which means they would command much lower prices.

'Buyers can consider an EC unit instead of an HDB flat if they can afford it. EC units may have more potential for capital appreciation as they are renovated and have condo facilities,' said HSR Property Group executive director Eric Cheng.

DTZ Research senior director Chua Chor Hoon added: 'For those who need to buy now, ECs are a good choice if they do not want to overstretch themselves with a private condo.'

By renting them out, they could get a yield of about 4 per cent, similar to that for a 99-year leasehold private condo, said Knight Frank's director of research and consultancy Nicholas Mak.

Like HDB flats, EC units are subject to a minimum occupation period of five years. This means that they cannot be sold within five years. They also cannot be leased out as a whole unit during that period.

After five years, they can be sold, but only to Singaporeans and permanent residents. They become private property after 10 years, when they can also be sold to foreigners.

Prices of EC apartments that are 10 years old and above could be about 5 to 8 per cent higher than newer EC units, said PropNex's Mr Mohamed Ismail.

Before an EC unit is 10 years old, its market is limited so sellers will not be able to raise prices significantly, said Mr Cheng.

'Some sellers may want to wait for higher prices if their EC unit is already nine years old so the best time to buy is when it is between five and eight years old.'

There has been a rise this year in the number of buyers of EC units as HDB resale flat valuations went up a lot, he said.

But HDB resale prices are expected to fall. Although EC prices may also fall, there is a positive side in that they may rise once the ECs reach 10 years of age.

Still, Mr Mak cautioned that the gains may be insignificant and advised buyers to get an EC unit with a view of living in it in the longer term. He said capital gains after privatisation will not be big as the EC market tends to be limited to Singaporeans and permanent residents.

'They are mostly HDB upgraders who are price-sensitive.'

Non-resident foreigners typically prefer districts 9, 10 and 11 and not the suburban areas where most ECs are located, he said. 'EC prices also tend to be a bit of a laggard in a period of price appreciation.'

Buyers should also note that an EC would need more maintenance by the time it is 10 years old. This extra investment to maintain the property may cancel out the possible gains, he added.
Posted by Richard Yeo at 11:58 PM No comments:

A ROW of nine pre-war shophouses, in the Peranakan enclave of Katong, are to be converted into a 'character' hotel aimed at leisure and business travellers.

Construction of the $12 million hotel on East Coast Road will start early next year and end in 2010.

Santa United International Holdings, a home-grown firm that started in the petroleum trading business but now boasts a growing hotel arm, will develop the project.

It will turn the property into the 67-room Santa Grand Hotel East Coast, keeping the conserved Peranakan-themed facade in the process.

This will include a new five-storey extension with 750 sq m of gross floor area at the back of the two-storey shophouses.

Some back portions of the shophouses will give way to the new block.

There will be a lap pool on the roof and a cafe, a restaurant and two shop units on the ground floor, where there will be alfresco sitting.

Santa United managing director Ng Cheng Lock told The Straits Times that he wanted to turn the property into a hotel because it is a rare stand-alone row of conserved shophouses situated in a charming area with a rich historical and cultural value.

Katong is home to many well-known eateries, particularly those serving Peranakan cuisine. And it was the place where Singapore's wealthy elite set up homes in the late 19th to the mid-20th centuries.

When the opportunity to buy the row en bloc arose more than a decade ago, MrNg jumped at it. He paid about $17 million then as it was at the height of the property market, he said.

The hotel, near the Holy Family Church, will be a cosy character establishment, rather than a hip or upscale boutique one like Hotel 1929, he said.

While Mr Ng considered putting a hotel on the site a few years ago, work began on plans and paperwork only a year ago.

Provisional permission from the Urban Redevelopment Authority came about two months ago in a ruling that included changing the land use from 'commercial' to 'hotel' and the go-ahead for the extension.

Some of the 12 tenants occupying the shops or the offices have already moved out. Santa, which also operates from the shophouses, is in the process of moving to a new office in Changi South.

The Hotel Licensing Board said Santa Grand Hotel East Coast will be subjected to a new hotel ruling that requires hotels along Joo Chiat Road and its surrounds to be let only at full-day rates from next year.

But Mr Ng is unperturbed as the firm plans to charge a daily rate of about $200. Other hotels in the Santa group also now charge daily rates, he said.

Its 80-room Santa Grand Hotel Bugis - located in two buildings, one a new development and the other a conservation house - is set to open early next year.

But the hotel in East Coast Road will be its grandest property, said Mr Ng.

Santa, which employs 130 people, recorded a turnover of about $70 million last year. Its hotels has some cross-over clients from its petroleum trading business, he said.
Posted by Richard Yeo at 11:54 PM No comments:

但他透露，它正在探讨如何衡量市镇会的表现，并为此设定指标。
Posted by Richard Yeo at 11:47 PM No comments: