THE recovery in private home purchases in the primary market (developer sales) has rippled over to the secondary market.

The number of resale private apartments and condominium units that changed hands in April this year alone was 817, almost the same as the 853 resale units sold in the first three months of this year. 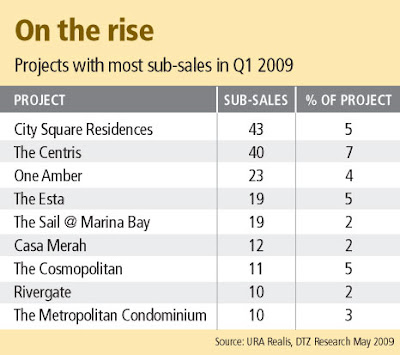 Subsale transactions of non-landed private homes also gained momentum with 275 caveats in April, nearly 70 per cent of the Q1 2009 volume of 404 units, according to DTZ's analysis of URA Realis caveats information as at May 29.

The Q1 caveats for condos/apartments bought in the subsale and resale markets already represented quarter-on-quarter increases of 52 per cent and 20 per cent respectively.

Subsales and resales are secondary-market transactions. Subsales involve projects that have yet to obtain Certificate of Statutory Completion (CSC) while resales relate to projects that have received CSC. Typically, a project obtains CSC three to 12 months after it receives Temporary Occupation Permit (TOP).

Putting things in perspective, DTZ's head of SEA research Chua Chor Hoon recalled that the pick-up in primary-market transactions began with the launches of Caspian and Alexis condos in February. By April, the action had spilled over to the secondary market, where buyers have prospects of picking up a completed property for immediate occupation or for leasing.

Says DTZ executive director Ong Choon Fah: 'During the initial stages of the volume recovery, individual sellers were not that aggressive in pricing. It's only when the buying momentum developed that they got bolder in asking prices.

'For some owners, if they don't get their price, they'll probably lease out the apartments for now.'

Knight Frank executive director (residential) Peter Ow reckons that if owners jack up prices too fast, buyers may pull back and this could lead to slower activity again in the secondary market. Potential buyers may then prefer to shop for homes in the primary market.

'Developers generally do not increase their prices too much for their project launches, as they have more stock to sell, compared with individual owners trying to offload one or two units in the secondary market,' he added.

But market psychology may be hard to predict and some potential buyers may sense an urgency to buy for fear of missing the boat again, he added.

DTZ's data showed that median subsale price of City Square Residences, One Amber and The Centris eased 2 to 5 per cent in Q1 over the preceding quarter, smaller declines compared with drops of 3 to 14 per cent in Q4.

However, for upper mid-tier projects, there were double-digit quarter-on-quarter declines in prices. Median prices of The Sail @ Marina Bay and Rivergate both slipped 15 per cent to $1,321 per square foot (psf) and $1,200 psf in Q1. In Q4, median subsale price of The Sail slipped 9 per cent while that of Rivergate, which is near the Singapore River, appreciated one per cent.

Resale prices of private homes in the prime districts were more resilient, with an average price fall of 3 to 4 per cent in Q1 2009.

DTZ's analysis also showed that subsales accounted for 14 per cent of non-landed private residential deals in Q1 2009, down from 18 per cent in the preceding quarter and the lowest subsale share since Q1 2007. The fall in subsale proportion in January to March 2009 was due to a bigger quarter-on-quarter jump - in fact a tripling - in caveats lodged for apartments/condos bought in the primary market in Q1.

The highest subsale activities were registered for projects that had been granted TOP since Q3 last year or are likely to obtain TOP this year. There were 43 subsale deals for City Square Residences at Kitchener Road from January to March 2009, making it the top subsale project in the period, followed by The Centris in Jurong with 40 subsales, One Amber in Katong (23 deals), and the The Esta and The Sail @ Marina Bay (19 units each).

Looking ahead, CB Richard Ellis executive director Joseph Tan said Rivergate is likely to top the subsale charts in Q2, when about 100 units owned by entities linked to Ferrel Asset Management were put on the market at about $1,300 to $1,600 psf. The units are said to have been substantially sold.

DTZ's Ms Chua reckons that interest in the subsale market will continue given that about 11,000 new private homes are slated for completion this year according to government data.

'Investors who don't want to be tied down with financial commitments upon TOP of the projects, especially those who bought on Deferred Payment Scheme, will choose to sell their units as the flagging rental market will further weaken their holding power,' she added.
Posted by Richard Yeo at 2:11 AM No comments:

THE owner and master tenant of an illegally refurbished condominium are now tussling over who the rightful landlord is of the property, leaving 200 residents wondering when they have to move out and what will become of their security deposits. 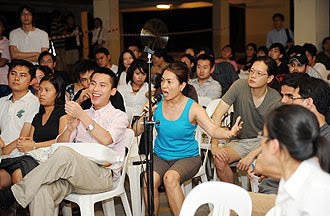 A Grangeford tenant, who wished to be known only as Joy, expressing her frustrations at a meeting held last night with property owners Cove Developments. -- ST PHOTO: SHAHRIYA YAHAYA

At separate meetings with residents on Thursday, both parties gave them different dates to move out of The Grangeford in Leonie Hill.

The master tenant, Ideal Accommodation, which had carried out the renovations and rented out the rooms, said they could move out by the end of this month, while property owner Cove Development has given them till June 14.

Tenants do not know who to believe, but noted that they have a legal contract with Ideal, and not with Cove.

They were asked to go after the Urban Redevelopment Authority (URA) discovered that Ideal had illegally partitioned apartments in the condo - sold en bloc in 2007 - to create 600 sub-units from 140 units.

URA told Ideal on April 29 to tear down the partitions by Wednesday, but most tenants were told only on Sunday, giving them three days to clear out.

On Wednesday, Cove Development, a unit of Overseas Union Enterprise (OUE), terminated Ideal's two-year lease and gained an extension from the URA till July 27 to remove the partitions.

But yesterday, in its first meeting with tenants in a week, Ideal said that its contracts with tenants still stand, and so does its lease agreement with Cove.

A representative, who identified himself as Mr Lee, said to the crowd: 'We don't care what Cove says.'

In response, Mr Steven Ngai, company secretary for OUE, told The Straits Times: 'If the tenants want to listen to Ideal and get cheated, don't blame Cove.'

Read the full story in Friday's edition of The Straits Times.
Posted by Richard Yeo at 2:06 AM No comments:

NESTLED within Toa Payoh Central lies a Housing Board block unlike any other in Singapore.

Its unique feature: Antique-looking spiral staircases snaking around its exterior. 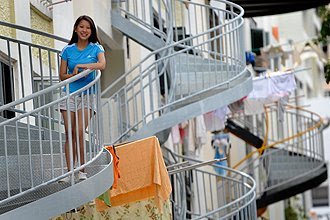 The staircases are not there for aesthetic purposes, however.

The block's original internal stairwell was gutted to make way for a small lift shaft when it underwent the lift upgrading programme (LUP) in February . As a result, new staircases had to be built. Since there was no room within the blocks, the stairs had to be added to the bulding's exterior.

The HDB said the conventional lift-upgrading solution - building an external lift shaft - would not have worked for the four-storey block.

It has no common corridor joining the apartments, so more lifts had to be installed.

The units are also on so-called 'half-landings', which means that even if an external shaft was built, residents would have had to walk up half a flight of stairs from the lift lobby to reach their apartments.

The block, 186, is the first of six to get similar staircases under the LUP.

By the time the project is done, a total of 67 lifts and spiral staircases would have been added to the blocks.

Read the full story in Saturday's editio of The Straits Times.
Posted by Richard Yeo at 2:01 AM No comments:

HDB Upgraders Have Their Say In Muted Market

They comprised more than half of those who bought private homes in Q1.

Fifty-six per cent of caveats for private home purchases in Q1 were lodged by buyers with HDB addresses, up from a 43 per cent share in the previous quarter. The last time this figure breached 50 per cent was in Q3 2002, when it was 52 per cent. 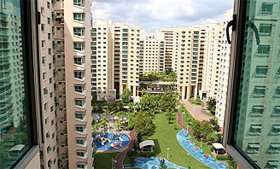 Market watchers note that the pick-up in HDB upgraders' share in Q1 came amidst the launch of mass-market projects like Caspian near Jurong Lake and Double Bay Residences in Simei as well as the relaunch of The Quartz in Buangkok. Such entry-level 99-year leasehold condos cater to HDB upgraders.

Property consultancy DTZ highlighted this trend in its analysis of caveats from URA Realis as at May 29. The reason behind this could be the pent-up demand from this segment of buyers who had been priced out of the private residential property market during the bull run in 2007.

Another important factor was the narrowing price gap between public and private homes, which resulted in private properties becoming increasingly within reach of HDB upgraders. 'With cash proceeds from the sale of existing HDB flats, the upgrader needs to borrow only about 50-60 per cent of the value of the new private property,' estimates DTZ's head of SEA research Chua Chor Hoon.

Knight Frank executive director (residential) Peter Ow also credited the rise in proportion of HDB upgraders to developers offering a combination of attractive pricing and interest absorption schemes (IAS) for projects. 'IAS helps tide these buyers until their new condo is completed and when they can sell their existing HDB flat,' he explained. 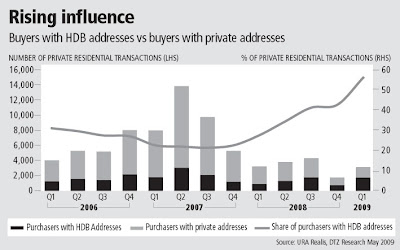 'At Double Bay, which we marketed, we saw many buyers in their 40s currently living in HDB flats nearby,' Mr Ow added.

DTZ's analysis showed that the highest proportion of buying (in URA Realis's 14-year caveats database) by HDB upgraders was in Q2 2002, at 81 per cent.

Generally, HDB upgraders' share of private home purchases tends to be higher when private residential prices are falling and come within their reach. And when property prices are shooting up, their share of purchases ebbs.

During the 1998 Asian Crisis, for instance, HDB upgraders' share hovered between 51 and 65 per cent per quarter, against a much lower share of 33-40 per cent in 1995 when prices were spiralling up.

Again, during the recent property bull run in 2007, their share was pretty low at 21-23 per cent, before starting to rise again last year when the property slump began.

DTZ also compared some buying preferences of HDB dwellers and private property owners who bought private homes in Q1. Some 88 per cent of total purchases by those with HDB addresses were under $1 million. In contrast, 40 per cent of buyers with private addresses invested in homes that cost $1 million and above. HDB upgraders also bought mostly smaller apartments.

Some 92 per cent of private homes that HDB dwellers bought in Q1 were outside prime districts 9, 10 and 11. And for those HDB dwellers who did pick up private properties in prime districts, 68 per cent were for units below 1,000 sq ft. Based on caveats lodged in Q1, the most popular projects for those with HDB addresses include The Caspian, The Quartz, Alexis and Double Bay Residences.

Knight Frank's Mr Ow said the proportion of HDB upgrader buying will vary depending on the profile of property launches or relaunches in the months ahead.
Posted by Richard Yeo at 1:56 AM 1 comment: