KEY South-east Asian cities will suffer a glut of hotel rooms for the next three years as the economic slowdown hits the travel sector, a global real estate consultancy said on Monday. 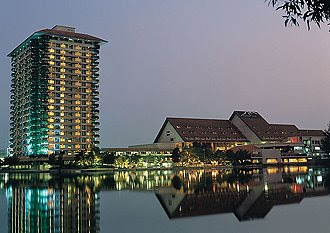 Key South-east Asian cities will suffer a glut of hotel rooms for the next three years as the economic slowdown hits the travel sector. --PHOTO: GRAND COPTHORNE WATERFRONT HOTEL

A CB Richard Ellis (CBRE) survey of five cities including Singapore, Bangkok, Hanoi, Ho Chi Minh City and Kuala Lumpur showed 23,000 four- and five-star hotel rooms will be potentially available from 2009 until the end of 2012.

'Despite the likelihood that some projects will be delayed or even cancelled, a significant number of hotel properties will open across the region in the next two to three years,' said Robert McIntosh, CBRE Hotels regional executive director. 'The additional supply, combined with declining demand, will present a challenging period for hotels in the short to medium term.'

In Singapore, which is already in recession and hit by falling tourist arrivals, almost 10,000 new rooms in the category will come onstream by the end of 2012 on top of the 25,700 in supply now, the consultancy said.

'Until recently, there was general consensus that Singapore could not only absorb the increase in supply, but that additional rooms were essential to accommodate the future growth in visitor arrivals,' said Alison Poore, CBRE Hotels senior consultant for South-east Asia.

'However, with declining occupancy... the addition of new supply will likely result in a further softening of the market in the short term,' she said.

Looking beyond the downturn, Singapore's tourist sector stands to benefit from the rise in hotel rooms when the global economy returns back to health, CBRE said.

In Bangkok, the number of four- and five-star hotel rooms will rise by more than 6,000 by the end of 2012 - a concern that is increased partly because of the ongoing political unrest in the Thai capital, said CBRE.

'Supply has increased substantially over the past two years, and the addition of further supply in the future is a cause of concern,' the consultancy said. 'The performance of hotels in Bangkok will be further impacted by declining demand driven by the economic crisis and recent political unrest.'

The consultancy said new rooms in Kuala Lumpur will increase by 10 per cent to 20,400 for the same period. -- AFP
Posted by Richard Yeo at 10:32 PM No comments:

Home buyers keen to upgrade from a Housing Board flat to a private condominium will have plenty of choice this year. That is going by data compiled by real estate services company CB Richard Ellis.

A total of 82 projects are currently ready to be put up for sale throughout this year, said CBRE, an international company with a research team in Singapore.

From the coastal areas of Pasir Panjang and Punggol to the residential zones of Simei and Sixth Avenue, there is a private apartment development waiting to be launched in almost every corner of the island.

Most are in the non-landed condominium category, aimed at Housing Board upgraders and young family starters.

CBRE's list defined the projects on the list as those that are 'launch-ready'. By this, it means projects that have all the necessary permits from the authorities so they can be marketed, although construction work may not have started. 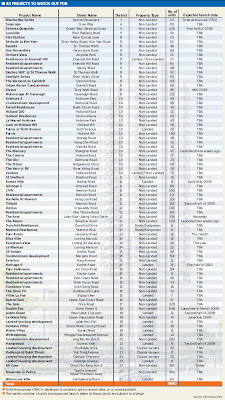 Already, four have been launched - including the latest, Mi Casa condominium at Choa Chu Kang, whose units went on sale this weekend. A further two are expected to be launched within the next two months.

With private property prices falling when HDB resale flat prices are still holding fairly steady, it is music to the ears of those who want to upgrade but have not been able to amid high prices and not so many mass-market launches in recent years.

Writer Ng Hui Hui, 28, who is looking for a private apartment but finds prices
a bit high now, feels the high number of launches will increase her chances of finding one at the right price.

'I'm more hopeful because the number of launches offers a lot of choices. There's more for me to consider,' she said.

HDB upgraders have flexed their muscle at condo launches so far this year, buying many units at The Caspian beside Lakeside MRT station, Double Bay Residences in Simei and The Quartz in Buangkok, for example.
Mr Joseph Tan, CBRE's executive director, residential, notes: 'If there are a number of HDB upgraders who are ready to enter the market, the sales momentum can be sustained.'

Mr Victor Soh, director of the developer, Fortune Shanghai Road, said: 'There was no delay in launching the project despite the bad market - we launched it when the project was ready. There were quite a number of people waiting for us to launch.

'All our units have already been sold and we're ready to start construction.'
While house-proud Singaporeans will enjoy poring over the launch-ready list, imagining their dream home, most projects may not actually go up for sale soon, as developers wait and see how the economy goes.
Only 10 out of the 82 could name a date or period, but even they said their dates are subject to change.

Still, judging by the small amount of dates given, the hold-out may not go beyond this year or the early part of the next, as the furthest indicated date a developer gave was the first half of next year.

Such delays also mean prices will not plummet too sharply, said a spokesman for listed developer City Developments.

He said: 'This has helped to balance current demand and supply by mitigating the supply of new apartments entering the market.'

The tough economic times are weighing on some developers, with Ms Chua Chor Hoon, a senior research director for global real estate adviser DTZ, saying: 'Some have been responding to the slow market by deferring projects that are due for completion to later years.'

A spokesman for residential project Verdure - a planned 75-unit, freehold development in Holland Road - said: 'The market is so bad, we can't launch it.'

Another, representing the exclusive 26-unit The Verv @ River Valley, said it was putting off its launch, explaining: 'Blame it on the economy.'
Both spokesmen declined to be named.

The experience of upcoming mid-market, 24-unit Evergreen View at Geylang Lorong 36 echoes this.

Mr Thomas Sim, associate manager of real estate firm PropNex Realty, which is the selling agent, said: 'We've only had the soft launch last month so far because the show unit is only slated for completion in May, and also partly because the market is poor now. As it is, the reaction from the soft launch wasn't very good.'

A key part of marketing a condo is to build a show flat to entice prospective buyers. Another reason some projects are being delayed is that developers are reviewing their plans in order to reconfigure units to a smaller size, say industry players. The smaller sizes make the units more affordable.
Knowing about the list of 82 'launch-ready' projects is good news for the likes of home-hunter John Yeo, 38.

The sales manager says: 'This means I have time and don't have to rush. I can take my time to choose. But of course, price and location must also be right.'
Posted by Richard Yeo at 10:29 PM No comments: