WASHINGTON - Sales of newly built US single-family homes dropped 0.6 per cent in March, but the stock of homes for sale at the end of the month still plummeted at a record pace, Commerce Department data showed on Friday.

February sales were much stronger than originally thought, with the report showing they rose 8.2 per cent, compared to the 4.7 per cent gain previously reported.

Analysts polled by Reuters had forecast sales at 340,000.

The official private home price index in Singapore fell 14.1 per cent in Q1 2009 over the preceding quarter, a steeper declined than the 6.1 per cent quarter-on-quarter drop registered in Q4 2008.

Real estate data released by Urban Redevelopment Authority (URA) today also show that prices of office, shop and industrial properties decreased by 12 per cent, 4.2 per cent and 10.1 per cent respectively in Q1 2009 over the preceding three months.

Rentals of private residential, office, shop and industrial properties posted quarter-on-quarter declines of 8.5 per cent, 10.7 per cent, 3.3 per cent and 5.6 per cent respectively in Q1 2009.

The Fiorenza features an Italian theme and an imported glass jacuzzi on all balconies.

KOH Brothers Group hopes to tempt HDB upgraders with the release of a small Kovan project this weekend while it holds off launching high-end properties until the time is ripe. 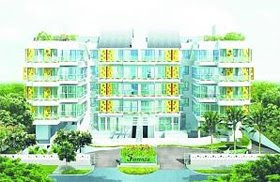 In the same area, the 521-unit Kovan Residences, which is nearer the Kovan MRT station than Fiorenza, still has unlaunched units. The 99-year leasehold project went for about $880 psf last year but those levels have since been cut. Last month, 56 units were sold at a median price of $705 psf.

Koh Brothers is offering the interest absorption scheme at a 2 per cent premium for Fiorenza.

Chief executive and managing director Francis Koh said the project would feature a glass jacuzzi imported from Italy on all the balconies. Each unit will also get a multi-room digital music system.

Koh Brothers had planned to release Fiorenza in the second quarter of last year. It was also hoping to launch the high-end Lincoln Suites off Newton Road by early this year, but the market has not been in its favour.

Mr Koh said the consortium would continue to lease out Lincoln Lodge - which is the site for Lincoln Suites - right into next year. It had, together with Heeton Holdings, KSH Holdings and Lian Beng Group, bought Lincoln Lodge at the height of the property boom in 2007 for $1,449.30 psf per plot ratio.

Koh Brothers has other development projects in the pipeline which it is holding until an appropriate time.

'The market may change very quickly. It can go up quickly, it can also come down quickly,' said Mr Koh.
Posted by Richard Yeo at 11:13 PM No comments:

A LACK of financing has put the brakes on the $1.87 billion Singapore Sports Hub project at Kallang. 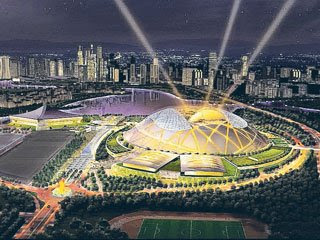 The $1.87 billion Sports Hub project is suffering from a lack of financing the lead agency of the Singapore Sports Hub Consortium told The Straits Times on Thursday, Apr 23. -- PHOTO: SINGAPORE SPORTS HUB CONSORTIUM

Construction cannot go ahead because of this, Mr Ludwig Reichhold, managing director of construction firm Dragages Singapore, the lead agency of the Singapore Sports Hub Consortium (SSHC), told The Straits Times on Thursday.

He said: 'The project is more or less ready to start because the design has been developed to a stage where we have a provisional permit to start.'

Read the full story in Friday's edition of The Straits Times.
Posted by Richard Yeo at 6:03 AM No comments:

Recovery Not In Sight

WASHINGTON - WORSE-than-expected news on US unemployment and home sales on Thursday dampened optimism that a broad economic recovery might be near.

The Labour Department said initial claims for unemployment compensation rose to a seasonally adjusted 640,000, up from a revised 613,000 the previous week. 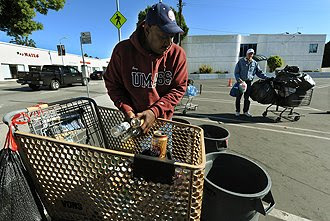 New claims for US jobless benefits rose in the past week to 640,000, reversing course after a surprise decline a week earlier. -- PHOTO: AFP

In another sign of labour market weakness, the number of people continuing to claim benefits rose to 6.13 million, setting a record for the 12th straight week.

Meanwhile, the National Association of Realtors said home sales fell 3 per cent to an annual rate of 4.57 million last month, from a downwardly revised pace of 4.71 million units in February.

Sales had been expected to fall to an annual pace of 4.7 million units, according to Thomson Reuters.

A top banking regulator tried to ease some concerns, saying banks and the housing sector had passed the worst part of their downturns.

'I think we're past the crisis stage. We're in the clean up stage now,' Sheila Bair, chairman of the Federal Deposit Insurance Corp, said at a financial reform conference.

But on Wall Street, stocks turned lower after the disappointing housing figures were released. The Dow Jones industrial average lost about 60 points in midday trading, and broader indices also fell.

The jobless rate in the US is expected to average 8.9 per cent this year and climb to 10.1 per cent next year, the IMF said. -- AP
Posted by Richard Yeo at 5:59 AM No comments:

(NEW YORK) Sales of US previously-owned homes fell in March after jumping a month earlier by the most in more than five years, indicating the market will remain depressed for much of the year.

Purchases decreased 3 per cent to an annual rate of 4.57 million, lower than forecast, from 4.71 million in February, the National Association of Realtors said yesterday in Washington. The median price slumped 12 per cent from a year ago and distressed properties accounted for about 50 per cent of all sales.

Record-low mortgage rates and a foreclosure-driven plunge in prices are making houses more affordable, helping the market stabilise following the biggest slump since the Great Depression. Even so, mounting job losses dim prospects for an immediate recovery.

'This fits with an idea of stabilisation of housing demand,' said Jonathan Basile, an economist at Credit Suisse Holdings Inc in new York. 'We've seen housing affordability go up across the country. The bad news has been diminishing.'

Shares of the largest homebuilders were down following the report, while stocks overall were little changed.

Another report showed the number of Americans filing first-time claims for unemployment insurance rose by 27,000 people last week to 640,000 people as forecast, while total benefit rolls reached a record, indicating the labour market continues to deteriorate.

Economists forecast resales would fall to a 4.65 million annual rate, according to the median of 69 projections in a Bloomberg News survey. Estimates ranged from rates of 4.37 million to 4.9 million.

Purchases were down 7.1 per cent compared with a year earlier.

The number of houses on the market dropped 1.6 per cent to 3.74 million. At the current sales pace, it would take 9.8 months to sell those homes, up from 9.7 months in February. The agents' group has said that a five to six months' supply is consistent with a stable market. -- Bloomberg
Posted by Richard Yeo at 5:53 AM No comments:

The pick-up in private home sales by developers has spilled over to the secondary market. Falling prices are greasing the flow. 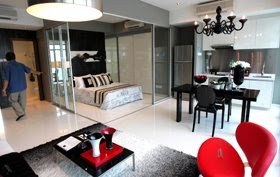 City Square Residences, the most popular subsale project in the first three months this year.

Caveats have been lodged for 1,063 private homes in the resale market in the first three months of this year, up 11.7 per cent from the preceding quarter. In the subsale market, 384 caveats were lodged in Q1 2009, reflecting a 44.4 per cent increase from the Q4 2008 figure, according to Savills's analysis of caveats captured by the Urban Redevelopment Authority's Realis system.

Resales and subsales refer to secondary market transactions. Subsales involve projects that have yet to obtain Certificate of Statutory Completion while resales relate to projects that have received CSC. CSC is typically obtained anywhere from three to 12 months after the project receives Temporary Occupation Permit (TOP).

The average prices of resale and subsale transactions at the most popular projects in Q1 2009 were generally lower than in the preceding quarter as well as the same period last year.

Average prices for 11 of the 12 most popular subsale projects in Q1 this year fell between one and 14 per cent from the preceding quarter. The exception was Clementiwoods Condo, where eight subsale deals were done at an average of $664 psf in Q1, some 5 per cent higher than in the previous quarter but down 7 per cent from the same period a year ago. 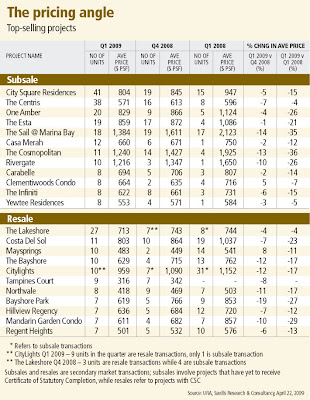 Compared with Q1 last year, average prices for all 12 top-selling subsale projects in Q1 2009 fell between 4 per cent (Centris) and 36 per cent (The Cosmopolitan).

As for resale transactions, the 11 hottest developments saw quarter-on-quarter price declines ranging from 4 per cent (for The Lakeshore) to 19 per cent (Bayshore Park) in Q1. The Lakeshore was the most popular resale project in the first quarter, with 27 units changing hands, followed by Costa del Sol, with 11 units.

Resale activity for high-end projects was limited. 'This could be attributed to the price disparity between sellers and buyers as the latter expect further downward price adjustment in the near future, as well as the stricter home loan criteria in terms of loan-to-value ratio, especially for investors,' Ms Sengupta said.

Mass and mid-tier projects also saw more subsale transactions than high-end projects. Much of the subsales activity in Q1 surrounded projects that have either received TOP recently or are close to receiving it. For instance, City Square Residences, The Esta, The Sail @ Marina Bay, The Cosmopolitan and Rivergate have received TOP in 2008/2009, while One Amber and The Centris will get TOP soon, Savills said.

Market watchers said that this could be because many specuvestors who bought on deferred payment schemes (DPS) may be inclined to offload their units as the TOP date approaches, when they have to pay up the bulk of the purchase price to developers.

However, CB Richard Ellis executive director Joseph Tan pointed out that regardless of whether buyers opted for DPS, private housing projects are typically a hive of activity around the time they receive TOP, drawing buyers who want to move in themselves or to rent out immediately.

He also attributed the increase in subsale and resale transactions in Q1 to 'prices being at fairly reasonable levels now', with the stock market rally improving sentiment.

Mr Tan said that whether the buzz in the secondary market continues will depend on the stockmarket. 'So long as the Straits Times Index remains fairly stable, it will give comfort to investors that the property market is close to bottoming out, given the price correction in the past 12-15 months,' he added.

According to DTZ's figures, which are based on resale prices, the average freehold luxury condo and apartment price of $1,880 psf in Q1 this year marks about a one-third drop from the peak of $2,800 psf in late 2007/early 2008.

As for resale transactions, the top grossers were a 10th floor apartment at Richmond Park at Bideford Road which sold for $2,199 psf and a 25th floor unit at Four Seasons Park at Cuscaden Walk that fetched $6.5 million ($1,701 psf).
Posted by Richard Yeo at 5:50 AM No comments: