THE $548 million sale of Gillman Heights Condominium to Ankerite Pte Ltd, a subsidiary of CapitaLand, was completed yesterday, the developer said in a statement. Ankerite will redevelop the site into a condominium with about 1,000 apartments.

The sale was not completed by the previous deadline of May 15, leading to some speculation that the collective sale might be off. But lawyers for the buyers and sellers quickly clarified that they were looking at the new deadline of May 22 instead.

The sale of the 99-year-leasehold estate on Alexandra Road dragged on for two years since the deal was first inked in 2007. The sale of Gillman Heights finally got the go-ahead this February after the Court of Appeal dismissed a last-ditch plea by minority owners to overturn the deal.

One sticking point was the transfer of $750,000 from the management corporation's (MCST) management fund to the sinking fund in August 2007 and March 2008, which was discovered during the due diligence exercise.

The lawyers for the buyers wanted the transfer reversed. That issue, and a separate suit by a local contractor against the MCST, were both eventually resolved - clearing the way for the sale to go through.

30 to 40 apartments have since been sold at private preview

FERRELL Asset Management, which counts Indonesia's Lippo Group as one of its investors, has put around 80 apartments at the RiverGate back on the market for sale, BT understands. 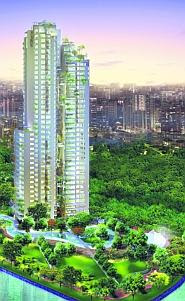 According to agents, a private preview began a few days ago and around 30 to 40 units have been taken up. The 545-unit freehold condominium in the Robertson Quay area received Temporary Occupation Permit in March, and was a joint development between CapitaLand and Hwa Hong Corporation.

The apartments on sale are spread over several floors and comprise three-bedders, four-bedders and penthouses. They are selling at $1,450 - $1,550 psf, one source said. Prices of lower-level units may even start from $1,380 psf.

The seller of the apartments is believed to be fund manager Ferrell Asset Management. One of its funds, the Ferrell Premier Real Estate Investment Fund, had paid over $180 million for 100 units in 2005, bought in two separate tranches of 80 and 20 units.

Previous reports did not mention the per-square-foot price of the fund's units. When RiverGate was first launched in 2005, units were priced at $1,080 psf on average. That subsequently rose to $1,600 psf in the final phase of release in 2006.

'The objective of this sub-fund is to achieve returns of 10 - 15 per cent per annum through investments in properties with medium to long-term capital appreciation potential.'