AT first glance, you might not have thought an economic slowdown was in the wind, with 1,000 visitors thronging the sale launch of the Housing and Development Board’s latest project at Bishan on Day One. 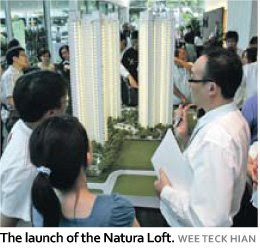 Describing the response as “enthusiastic”, developer Qingjian Realty’s deputy general manager, Mr Li Jun said: “In fact, online registrations started coming in at 8am ... There are interested buyers who have not even seen the show flat.”

The crowd was a mix of young couples and families looking to upgrade. IT professional Ashley Yong turned up with fiancee Rebecca Lim.

“We can’t afford a private property, and we like this location,” he said. His parents live in Bishan and the couple expects several Government grants to help them finance their first flat.

“Economic crisis or not, I don’t expect public housing prices to come down by, say, 50 per cent, especially in a prime location like Bishan where resale flat prices will still continue to be high,” added the 32-year-old.

“I am here to compare the differences between a DBSS flat and a private condominium,” said Mr Lim, who lives in a Pasir Ris executive flat with his wife and nine-year-old daughter.

Still, good turn-out aside, by the time the show-flats closed at 6pm on Friday, there were just 80-or-so applications.

So, has the weakening economy dampened the mood of property hunters — especially with Natura Loft units asking prices higher than DBSS flats at Boon Keng and Ang Mo Kio?

In January, more than 1,100 applied for 714 DBSS units at City View@Boon Keng on its first day of launch. In July, 130 applied for 578 DBSS units at Park Central@AMK within the first few hours after having been launched on a Wednesday.

Falling private home rents seen as a major cause

THEY are the next segment of the local property market to be hit by the global financial crisis.

Rents of Housing Board flats, which have been climbing steadily, largely on demand from foreigners squeezed out of the private homes market, are up only slightly in the third quarter even as rents of private homes fell.

But property experts say HDB rents have likely peaked. They will hold steady for the next several months before they begin to crack from the pressure of falling rents in the private homes market.

'Any decline in private rents is going to contribute to the downward slide in HDB rents, but it may take a few months for the impact to filter down,' said Knight Frank's director of research and consultancy Nicholas Mak.

The pressure is already starting to show: Rents for HDB flats have shown smaller increases in the third quarter.

Private home rents are expected to continue dropping given the weaker economic outlook, particularly as supply is expected to rise next year when more developments are completed, experts say.

HSR Property Group executive director Eric Cheng says HDB rents are likely to stay stable for the next few months until the gap between private home rents and HDB rents starts to narrow.

There are now 21,400 HDB flats approved for subletting, up from 20,200 in the second quarter. But HDB subletting deals fell 4 per cent to 3,960 cases in the third quarter.

ERA Asia-Pacific's assistant vice-president Eugene Lim said: 'Next year, when tenancies are up for renewal, you will see rentals coming down.'

If landlords do not lower rents, their tenants may switch over to private apartments as the price differential between the two types of property narrows.

'It's the push-down effect as those pushed out of the private market go to the HDB market,' said ERA's Mr Lim.

An HDB property agent, who wanted to be known only as Chui, said sentiment in the HDB market has been slightly hit by the gloomy economic outlook and there is more 'tenant resistance'.

Unit size and location play a big part in determining HDB rents, given that there is a renters' threshold, said PropNex chief executive Mohamed Ismail.

'A small three-room flat in a good location can get more than $2,000 but an executive flat in the same location may not command even $3,000,' he said.

'The threshold for HDB flats is around $2,500. Beyond that, people will go for condos with facilities.'

HDB flat owners can rent out their entire unit after occupying it for three years. This minimum occupation period rises to five years if they have a subsidy or housing grant.

Mr Alan Wong rented out his 67 sq-m three-room HDB flat in Kallang last month for a whopping $2,100 a month.

'It's a family from China. They are permanent residents, professionals, and have a daughter studying in a school nearby,' he said.

But he is one of the lucky few. HDB data shows median rents for three-room flats in the Kallang/Whampoa area at $1,500.

Still, rents of Marine Parade three-roomers have fallen from $1,750 in the second quarter to $1,700 in the third.
Posted by Richard Yeo at 6:22 PM No comments:

Where do you see this?

In media and analyst reports on office property, as well as advertisements for office space.

What does it mean?

Grade A refers to the most prized category of office space.

There is no definition set in stone, but the term is generally used to describe offices found in prime, well-maintained buildings that have large, column-free floor plates and high ceilings.

Why is it important?

Grade A offices are the most sought-after in any country in the world, particularly in space-hungry financial hubs such as Singapore.

Rents and prices of Grade A space in the Republic have skyrocketed in the past two years because of a supply shortage and soaring demand from firms that have expanded aggressively here.

However, the global financial crisis has tempered this rise in values and even caused values to drop in some areas. Nevertheless, demand for Grade A offices remains solid, especially with companies that need to maintain a certain image and address.

So you want to use the term. Just say...

'If commercial rents fall enough, our company might be able to relocate from this rundown building to Grade A offices.'
Posted by Richard Yeo at 6:01 PM No comments:

Only exec condo site to proceed, while tenders for other sites cancelled

THE Government has largely put a halt to outright land sales until the middle of next year to help stave off the risk of oversupply as the property sector keeps heading south.

Most development sites it had previously slated for definite release this year will be shifted to a reserve list where properties are offered for sale only if adequate interest is registered by developers.

Property players hailed the move, saying it will alleviate the pressure of a supply glut and help inject some much-needed confidence into the market.

Official data shows that property prices here have started to slip. While they have yet to plunge, sentiment has deteriorated dramatically in recent weeks.

As the global financial crisis deepens, property stocks have been battered and banks here have tightened credit to developers. Industry sources say banks have become more selective in who they deal with, with one saying lending for new projects is hard to secure.

In the office and residential markets, there are fears of an oversupply. The office market expects a large supply to come onstream from 2010. There is a long pipeline of residential launches. 'We all know about supply but demand is the unknown quantity,' said Chesterton Suntec International's Mr Colin Tan.

Knight Frank managing director Tan Tiong Cheng said: 'This is one small measure which will be a relief to developers who are worried about further supply coming to the market. It is also a signal that the Government is prepared to stabilise the market, and not allow it to go the way of equities.'

A Hong Leong Group spokesman said: 'Given the unprecedented global financial crisis we are in, the steep tumble in stock markets and serious slump in the property sector, any action that can alleviate the situation will be welcomed.'

Yesterday, the Government said that it will cancel the tenders for two out of three confirmed sites that were launched but not yet closed. It will allow the outright sale of an executive condominium.

Of four remaining confirmed sites for sale this year, three will be moved to the reserve list and one will be removed.

Developers like the reserve list system as it allows them to adjust supply to meet demand. It was the only sale method used for nearly four years after the slowdown in the wake of Sept 11, 2001.

Of the cancelled sites, one is for a transitional office site at Mountbatten Road while the second is for a white site - which can be used for different functions, such as residential or commercial - bordered by Rochor Road and Ophir Road.

Transitional office sites, aimed at easing the tight office supply, have lost their appeal as more supply will come in 2010.

The Government did not award a recent transitional site tender as the one bid received was 'too low' and has since moved it to the reserve list. The Government has also suspended the sale of confirmed sites in the first half next year and will sell only reserve list sites.

The Ministry of National Development also lifted a ban imposed 18 months ago on the conversion of office buildings into apartments in the city area.

The Urban Redevelopment Authority imposed the ban in May last year to ease an office space crunch. It was to have lasted till the end of next year.

While a rush of conversion projects is not expected, the move gets rid of an unneeded ban and will help to lift the confidence level in the market, experts say.

The ministry said the changes will allow the market time to assess and respond. 'While Singapore's fundamentals remain sound, the global economic uncertainties have affected Singapore's economic outlook, as well as the outlook for the property market,' it said.
Posted by Richard Yeo at 5:59 PM No comments: