Singapore Is Most Liveable City In Asia

Europeans and Americans view country as best in region while Asians say it is world’s top spot.

SINGAPORE has hit another home run with expatriates - Europeans and Americans reckon it is the best place in Asia to live, while Asians say it is the top spot anywhere in the world. 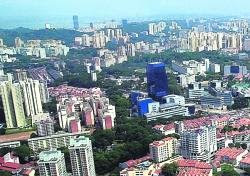 The annual survey, which has a major influence on luring foreign talent, compares living standards in 254 locations across the globe.

For the sixth straight year, Asian expatriates have named Singapore as the best city worldwide for quality of life.

Its fine infrastructure and health facilities, cosmopolitan population, and low health risks and crime rates scored the Republic plenty of points among those surveyed, according to the poll by human resources consultancy ECA International.

Singapore trumped the Australian cities of Sydney and Melbourne, which were ranked the second and third most attractive places worldwide for Asians to call home .

Europeans and Americans were also sold on Singapore, ranking it as their preferred choice in Asia, although on a global scale, they opted for Copenhagen. The Danish capital also ranked as the fifth best place worldwide for Asians to live in.

About 1,500 companies globally buy the report, so the ranking can greatly influence hiring policies.

ECA recommends that companies do not need to pay any ‘hardship’ allowances to their workers assigned to Singapore. This allowance, which can comprise up to 30 per cent of an expat’s salary, is paid to workers in countries where the standard of living is lower than in their home base.

The more comfortable the location, the lower the allowance and Singapore’s is set at zero.

However, there were some negatives this year with scores for air quality in Singapore hit by the smoke haze.

The Republic’s score for availability of quality accommodation also declined slightly, primarily due to the collective sale fever which has ‘reduced the supply of decent-standard accommodation in Singapore, irrespective of cost’, said Mr Lee Quane, ECA International’s general manager.

This narrowed the gap between Singapore and other locations such as Hong Kong, which jumped eight places in the rankings to No. 4 on the list of Asian cities with the best quality of life for Asians.

Mr P.Maran, an Indian national in his 40s working for a technology multinational firm here, said Singapore was ‘by far the best place for Asians to live as it is safe, clean and is closer to home than other locations such as Australia’.

But he noted that the cost of such high-quality living comes at a price. ‘The cost of everything from rental to transport to children’s education is shooting up,’ he said.

While this survey did not rank Singapore in terms of cost of living, an ECA study last November showed that the Republic rose 10 places in a global survey of the most expensive places for expatriates to live.

But despite the jump, Singapore, at No. 122, is still significantly cheaper for expats than Hong Kong and other key global centres, such as London - at No. 10.

F1 'Rooms With A View' May Not Have A View

Signages, lighting system may foil fans trying to get a free view

Fans of the Formula 1 (F1) Grand Prix hoping to get a free peek of the race - from the comfort of hotel rooms, for example, without forking out for the tickets - are likely to be disappointed during the Singapore leg. 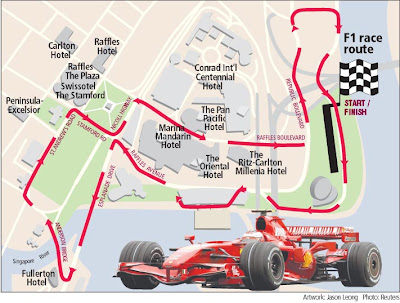 Sources said that Singapore GP Pte Ltd, the organiser of the race here, is likely to put up fencing and advertisement hoardings which could obstruct views from 'unofficial' locations come Sept 28.

There are also plans for a lighting system that could make watching the race from such unsanctioned locations very hard, the sources said.

The news is unlikely to go down well with hotels, which have been selling rooms at up to three times the normal going rates for the week the race will be in town.

When contacted, Singapore GP told BT that 'safety and operational measures' such as safety fencing, advertising signages and the lighting system for a night race will need to be put in place for the event.

'Once these are put in place, views of the race from unofficial locations may be obstructed,' said Alastair Hunt, circuit park & events manager for Singapore GP. 'At this point, there is no way that any venues along the circuit route would be able to guarantee unobstructed views of the Singapore Grand Prix.'

Sources said that the organisers could be looking to minimise 'leakages'. This refers to the issue of people who don't buy a ticket and instead watch the race from conveniently located properties - such as hotels and high-rise office buildings - along the route.

Most trackside hotels are charging two to three times their usual daily room rates during the peak race days.

Bookings have been strong for the race week, the hotels have said. In addition to Grand Prix fans flying in to watch what will be the world's first night race, hotels are also seeing lots of corporate bookings, especially from multinational corporations with offices here which are looking to host staff and clients from overseas.

It was previously expected that in addition to watching from ticketed locations, fans will also be able to have a clear view of the race from numerous trackside hotels such as Swissotel The Stamford, Pan Pacific, The Oriental, Marina Mandarin, The Fullerton and Ritz Carlton.

But even as customers have been snapping up rooms and F1 packages from the hotels, most hotels are not offering any kind of 'view guarantee'.

'Demand for the rooms is very strong,' said Cheryl Ng, Pan Pacific's public relations manager. 'But we do not offer any kind of view guarantee.'

Said Singapore GP: 'To be assured of the best views and overall race experience, tickets and corporate packages should be bought directly from Singapore GP.'

The organiser is working to maximise the viewing locations for the race due to the overwhelming interest. Ticket sales have already started, and more tickets will be released for sale once Singapore GP secures agreements with other partners, it said.

But some fans are worried that if non-paying spectators are kept away from the circuit, it will deflate the very 'buzz' the race hopes to generate for Singapore.

The F1 race is one of several initiatives geared towards achieving the government's target of attracting 17 million visitors to Singapore by 2015.
Posted by Richard Yeo at 8:22 AM No comments: