Speed Up Construction Of Build-To-Order Projects

I WOULD like to highlight my concern about a shortage of HDB flats in the coming years and urge the authorities to speed up the construction of build-to-order (BTO) projects.

My husband and I have been married for two years and we are living with our in-laws. We have been searching for a flat for the past 11/2 years.

As we could not afford the high cash over valuation and renovation cost for resale flats, we had been trying our luck in the HDB balloting exercises.

After many attempts, we have managed to get a queue number for the build-to-order exercise for Telok Blangah Towers.

However, it will be completed only in July 2013.

Could the work for BTO projects be speeded up and completed in two to three years' time?

I understand from many of my friends that they are either holding back their marriage or pregnancy due to unsuccessful applications for BTO flats or insufficient funds for resale flats.

I sincerely hope that the authorities would look into speeding up the work on build-to-order projects and assist first-timers in getting their flats fast.

Most People Believe US Is In The Grips Of Recession: Poll

WASHINGTON - EMPTY homes and for-sale signs clutter neighbourhoods. Layoffs are on the rise. Paychecks and retirement investments are taking a hit.
Could the US be in recession? Sixty-one per cent of the public believes the economy is now suffering through its first recession since 2001, according to an Associated Press-Ipsos poll.

The fallout from a depressed housing market and a credit crunch nearly caused the economy to stall in the final three months of last year. Some experts, like the majority of people questioned in the poll, say the economy actually may be shrinking now. The worry is that consumers and businesses will hunker down further and pull back spending, sending the economy into a tailspin.

Squeezed by high energy and food bills, 'we can't afford the things that we normally buy,' she said. 'We are cutting corners in our spending. For our groceries, we are buying a lot of generic and we are eating out less.'

For many, the meltdown in the housing and mortgage markets has proved especially disturbing. Record numbers of people were forced from their homes, unable to afford the monthly loan payments. People watched their single biggest asset fall in value, a reason to tighten the belt.

'Obviously the housing market is creating deep concern. And one of the real problems could be that if people, as a result of their value of their homes going down, kind of pull in their horns,' President George W. Bush said in a television interview aired on Sunday.

Credit has become harder to get, thwarting would-be home buyers, adding to the glut of unsold homes and aggravating the housing industry's woes.

'For-sale signs are everywhere. In my area, 35 to 40 homes are standing there and aren't even complete. There aren't any buyers,' said Mr Jim Sims, 60, of Greer, South Carolina.

Ms Nanette Dahlin, 52, of St. Louis Park, Minnesota, called the situation 'very scary.' She said friends in Madison, Minnesota, put their home up for sale recently and reduced the asking price more than US$100,000 (S$141,749) in just a week. 'They are in bad shape,' Ms Dahlin said.

For all of 2007, the economy grew by just 2.2 per cent. That was the weakest performance since 2002, when the country was struggling to recover from the last recession. The housing collapse was the biggest culprit in 2007. Builders lowered spending on housing projects by 16.9 per cent on an annualised basis, the most in 25 years.

The job market is faltering - a point driven home by a report showing that employers cut jobs in January for the first time in more than four years.

'The way things are, people are afraid of losing their jobs,' Ms Sanchez said.

Employment concerns
Employment concerns are contributing to darker feelings about the economy and people's own financial well-being. Consumer confidence, as measured by the RBC Cash Index, dropped to a mark of 48.5 in early February. It was the worst reading since the index began in 2002.

A cooling job market along with high energy and food prices are taking a toll on paychecks. Workers' average weekly earnings, adjusted for inflation, fell 0.9 per cent last year. In 2006, earnings grew by a solid 2.1 per cent.

Wall Street is unsettled and as a result, people's nest eggs are not what they once were.

In fact, that was the top economic worry in the AP-Ipsos poll.

Fifty-nine per cent said they were worried 'a lot' or 'some' about seeing the value of stocks and retirement investments drop.

By one rough rule of thumb, a recession occurs when there are two consecutive quarters - six straight months - when the economy shrinks. That did not happen in the last recession, though. The economy contracted in the first quarter of 2001, turned positive in the second quarter, shrank in the third quarter and turned up again in the final quarter of that year.

The National Bureau of Economic Research, the recognised arbiters for dating recessions, uses a more complicated formula. It takes into account such things as employment and income growth. By that measure, the last recession was in 2001, starting in March and ending in November.

US not in recession: Bush
Mr Bush, citing some experts, said the US was not in a recession, although he acknowledged 'that the signs are troubling enough' to justify the US$168 billion economic rescue plan that passed Congress this past week. The measure he intends to sign on Wednesday includes tax rebates for people and tax breaks for businesses.

To bolster the economy, the Federal Reserve embarked on a rate-cutting campaign in September, with two big reductions last month. In just eight days in January, the Fed slashed rates by 1.25 percentage points. The hope it that the lower rates will induce people to buy more and revive the economy.

So if the poll figure of 61 per cent is right - that the country is now in recession - then those relief efforts will help ease the effect of a downturn.

'People are both depressed and anxious about the state of affairs. The anxiety is going to persist because we are in an uncertain season economically and politically,' said Mr Terry Connelly, dean of Golden Gate University's Ageno School of Business.

The AP-Ipsos poll was conducted from Feb 4 to 6 and involved telephone interviews with 1,006 adults. It had a margin of sampling error of plus or minus 3.1 percentage points. -- AP
Posted by Richard Yeo at 8:22 AM No comments:

WASHINGTON - UNITED States President George W. Bush said he would sign a US$152 billion (S$215 billion) package on Wednesday that is aimed at keeping the world's largest economy out of recession with tax rebates and business investment incentives.

Citing private-sector economists, Mr Bush said on Sunday he did not believe the US economy was in recession despite an implosion in the housing market, a widening credit crunch and, for the first time in 53 months, a loss of jobs in January.

'I will be signing this bill Wednesday,' Mr Bush said in an interview on Fox News Sunday.

Asked whether he would consider further action if the economy continued to sputter, Mr Bush said: 'We just have to play it by ear.'

Beyond prompting fears of a global ripple effect, the health of the US economy has become a key campaign issue for Republican and Democratic candidates seeking to contest November's presidential election to succeed Mr Bush.

The housing sector continued to soften. Pending sales of previously owned homes fell by 1.5 per cent in December and were off a sharp 24 per cent from a year ago, the National Association of Realtors said. Major retailers reported a slowdown in consumer spending.

Finance officials from the Group of Seven industrial nations said this weekend that while the US economy was likely to escape a recession in 2008 and economic fundamentals remained 'solid', far more work was needed to restore financial markets to good working order and safeguard global growth.

The G7 ministers pointed to serious risks from the US property market slump and subsequent tightening of credit conditions, which has slowed the flow of money to the consumers and companies that drive the world's largest economy.

Business incentives
'The current financial turmoil is serious and persisting,' US Treasury Secretary Henry Paulson said as the G7 finance leaders laid out plans to treat the root causes of market distress at a meeting in Tokyo.

'As the financial markets recover from this period of stress, as of course they will, we should expect continued volatility as risk is re-priced.'

Some Democrats have talked about offering a second measure aimed at providing more aid to the economy but Mr Bush warned Congress against going too far to adopt regulations that could constrain businesses and the economy.

'That's why I was so supportive of this current package, because it was temporary,' Mr Bush said.

After a brief spat over the size of the stimulus package, the Senate and House of Representatives agreed on Thursday to a measure that would provide one-time rebates of up to US$600 for individuals, US$1,200 for couples and US$300 for each child.

Low-income people, including retirees on Social Security and disabled veterans who pay no income taxes, would receive cheques of US$300. The cheques could be in the mail within months.

The package should fuel corporate investments by allowing firms to write off equipment purchases made this year more quickly.

Some economists have said that while the measures will buy time, they may not be enough to avert recession. -- REUTERS
Posted by Richard Yeo at 8:20 AM No comments:

Singapore is an increasingly popular choice for Korean students.

It's not just the local education system that's attracting them here.

There has been a small but growing number of students who are coming to Singapore, specifically to enroll in international schools. 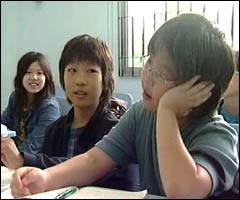 Students at the Singapore Korean School

Weekend classes at the Singapore Korean School have become the only time where many of the students learn the Korean language.

They are among an estimated 6,500 Korean students enrolled in international and government schools here, where English is the medium of instruction. 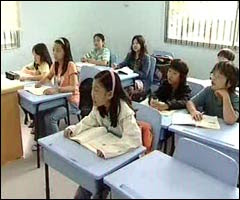 "India has develop(ed) very fast and many countries looking to India. We want (to know about) the Indian culture and we want to make friends with Indian students," said Han.

"I can learn Chinese, English and so many languages in this country," said Kang.

Both Han and Kang plan to study at a university in Singapore.

But some of their classmates hope to move to the West once they have mastered English.

Many Koreans said they are attracted to Singapore's cultural and geographical proximity - a familiarity that has grown in the last decade.

"10 years ago when I went back to Korea, my friends asked me Singaporeans use what language. Now, almost all Koreans know Singapore, so they think Singapore is a very safe country. Security, education, everything here is very good," said Chun Kyung Ok, who sent both her children to schools in Singapore.

Chun's son, Michael, is a Primary Six student at East Coast Primary. He is the second child in his family to study in Singapore.

His sister also attended a local school when the family lived here 10 years ago.

Currently, the Korean School only has room for 100 primary-level students, and there have been increasing calls by the Korean community to expand.

So from 2010, the school will offer an international secondary school curriculum - the International General Certificate of Secondary Education (IGCSE).

It will also relocate to a bigger campus which can accommodate up to 500 students. - CNA /ls
Posted by Richard Yeo at 8:10 AM No comments: