DESPITE the recession, the saga over the Gillman Heights en bloc sale continues, as some minority owners from the 608-unit development off Alexandra Road take their fight to the highest court to block the sale.

The 10 minority owners have filed for a hearing with the Court of Appeal in a bid to overturn the decision made by the High Court in June that allowed the $548 million collective sale to Singapore’s largest listed developer CapitaLand and its partners.

The minority owners — who have been battling the sale since last year — contend that the laws governing en bloc sales do not apply to former HUDC estates such as Gillman heights.

And even if the laws did apply, they argue that the Strata Titles Board (STB) was wrong to approve the Gillman Heights deal, when it received consent from only 87.5 per cent of the owners.

The minority owners’ stand is that even though Gillman Heights was completed in 1984, it was privatised from an HUDC estate only in 2002 and is therefore less than 10 years old.

In June, Justice Choo Han Teck ruled in the High Court that Gillman Heights was more than 10 years old and added that the 22 minority owners did not provide adequate reasons why the sale should be stopped.

But 10 of those 22 minority owners are now planning to use a similar argument, among others, to fight the case in the Court of Appeal, saying that the legal age of the development should be counted from 2002, when it received Certificates of Strata Completion.

The others have dropped out of the fight.

The family of Ms Nadia Abdullah, 24, was among those who fought against the original STB decision.

“We didn’t want the sale at all in the beginning but now I’m hoping we can get it over and done with, so we can move forward,” she said.

The Court of Appeal hearing is set for February.- 938LIVE
Posted by Richard Yeo at 9:48 PM No comments:

S'pore Economy Should Recover In 2010: Economist

THE economy is expected to suffer more pain next year, but the contraction should be shortlived, according to a top international economist yesterday.

Mr Donald Hanna, Citi's global head of emerging markets, said Singapore's economy should shrink by 1.2 per cent next year but bounce back with 3.8 per cent growth in 2010.

'The biggest underlying driver of the recession would likely be an export contraction that is deepening in intensity and broadening in scope,' said New-York based Mr Hanna, who was speaking to the media after presenting his report Emerging World: The Rocky Road to Recovery.

'But given the highly open nature of the Singapore economy, virtually no sector will be spared.'

Mr Hanna's prediction of a rebound in 2010 represents a view shared by a growing chorus of experts, who are tipping a 'relatively short' U-shaped recovery for Singapore.

But their key assumptions are that the US housing market starts to bottom next year while no new 'systemic financial risks' pop up.

Yet long-term growth and the prospects for asset appreciation in emerging markets will likely suffer even after the shock of the recession fades, he predicted.

Mr Hanna also believes that emerging markets run the risk that the souring of near-term global growth could spark more protectionist trade attitudes and generally undermine confidence in the ability of markets to provide for 'predictable growth'.

'While world leaders have been quick to call for the avoidance of beggar-thy-neighbour devaluations or trade barriers, the worst for many countries still lies ahead,' he said.

He added that demand for corporate bonds - which have taken a beating this year - might come back in the middle of next year as investor appetite for risk re-emerges.

And there might be better opportunities in Asian bonds because the 'dislocations are bigger in US bond market than in Asian markets,' Mr Hanna said.

Mr Thomas Kaegi, senior economist at UBS Wealth Management Research, told The Straits Times that in terms of Singapore corporate bonds, it is important to go for defensive sectors.

They include utilities, telecommunications and consumer staples.
Posted by Richard Yeo at 9:45 PM No comments:

DARK clouds are still gathering on the economic horizon, but a silver lining is apparent too, said Barclays Capital economists yesterday.

The rapid fall in oil prices could provide a larger-than-expected stimulus to economic growth, while the effects from heavy government spending in the region should kick in soon, said Mr Peter Redward, Barclays' chief economist for Asia excluding Japan.

'We do see some significant stimulus coming down the pipeline into the region,' he told a media briefing on the macroeconomic outlook for emerging Asia.

The fiscal stimulus measures being announced by Asian governments alone 'could add up to 11/2 percentage points of growth in the region next year'.

This is a significant contribution, especially since it is 'probably the first time in the best part of 20 years that Asian countries have been in a position to use fiscal policy as a counter-cyclical tool', Mr Redward said.

A lack of reserves amid the Asian financial crisis in 1998 made it impossible for most governments to spend their way out of recession.

Countries in the region will also benefit from the recent plunge in energy prices.

'We estimate that the fall in crude oil prices will inject something like 2.5 to 3percentage points of GDP into the region,' on top of the fiscal expansion, added Mr Redward.

Pump prices in Singapore have already fallen a number of times in recent months, and 'can come down significantly further', he said. 'We're going to start seeing utility bills come down as well.'

Mr Redward is projecting GDP growth for Asia of 7.2per cent this year and 5.2per cent next year - well below previous forecasts.

For Singapore, Barclays economist Leong Wai Ho has cut his growth prediction to 2per cent this year from 3.8per cent. He is tipping a contraction of 1per cent next year. Weakness in the manufacturing sector will spread to other industries, dampening private consumption and raising unemployment, he said.

Job losses are also expected to exceed those in 2001, with unemployment doubling to 5per cent by the second quarter next year.

But the economy could find a bottom in the third quarter, followed by two or three quarters of 'sub-trend growth' before picking up for real. This means stock market investors could see a turnaround in their fortunes as early as the first quarter of next year, said Mr Redward.

Another good sign: Inflation has all but disappeared as a policy concern for governments in Asia. Food and energy prices are starting to fall, and slower economic growth will lower core inflation.

In fact, deflation could emerge next year, with prices declining by a half to one percentage point in economies such as China, Taiwan and Singapore, Mr Redward suggested.
Posted by Richard Yeo at 9:44 PM No comments: 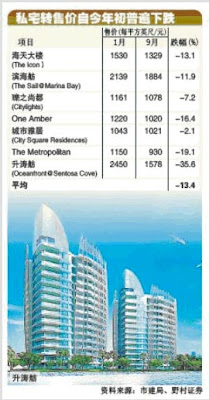 警惕投资者也许短期内不是进场的时机，分析师提出，发展商在未来几个月里为了清仓而削价的可能性相当可观，而炒卖者抛售资产也将给楼价带来下跌压力。
Posted by Richard Yeo at 9:32 PM No comments: