NEW YORK: US Federal Reserve chairman Ben Bernanke is delivering what he promised five months ago: record-low mortgage rates and a refinancing boom that is putting cash in US consumers' pockets by buying up mortgage securities. 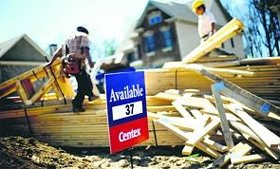 Workers preparing a delivery of lumber to a new home site in Alpharetta, Georgia, late last month. Purchases of new homes in the US rose unexpectedly in February. -- PHOTO: BLOOMBERG.

The rates are the lowest in records dating to 1971, and come after Mr Bernanke told Congress last November that helping the most creditworthy borrowers was essential to reviving the economy.

The Fed's effort to bring down fixed rates may give consumers as much as US$25 billion (S$38 billion), said Mr Mark Zandi, chief economist of Moody's Economy.com.

The extra cash may help boost first- quarter consumer spending by 1 to 1.5 per cent, said Mr Barton Biggs, managing partner at hedge fund Traxis Partners. Consumer spending accounts for about two-thirds of the US economy.

Mortgage applications in the United States rose for the fourth straight week last week as a decline in borrowing costs spurred home owners to refinance, while purchases of new houses unexpectedly rose in February.

In November, the Fed said it would buy up to US$500 billion in home-loan securities, causing the biggest one-day drop in mortgage rates in at least seven years, according to Bankrate.com. On March 18, the central bank almost tripled the size of the programme to up to US$1.25 trillion in purchases this year. The intent is to cut rates and make real estate financing easier to get, the Fed said.

The plan to buy mortgage bonds this year is succeeding where US$11.6 trillion of government lending, spending and guarantees so far has failed. 'This has been the most successful effort, at least so far in this crisis, to shore up the economy,' said Mr Zandi.

Mr Bernanke's mortgage purchase programme may help curb a recession that is in its second year and being driven by the highest jobless rate in a quarter of a century and shrinking household wealth.

'If you throw enough money at one credit market, you will bring down the price,' said Dr Gerald O'Driscoll, a senior fellow at the Cato Institute and former vice-president of the Dallas Federal Reserve. 'They are targeting the mortgage market in an attempt to speed the process of establishing a floor in the price of housing.'

Home owners who refinance with a half-point drop in fixed rates may save US$150 a month on a US$300,000 mortgage, said Mr Stephen Stanley, chief economist at RBS Securities.

Cheaper financing may also spark a turnaround in the housing market. Sales of previously owned homes rose 5.1 per cent to 4.72 million at an annualised pace in February from the prior month as low mortgage rates spurred demand, the National Association of Realtors said this week. Mr Bernanke cited lower mortgage rates in testimony in February as evidence that Fed policies were working, noting rates had fallen 'nearly 1 percentage point' since the programme began.

'We have seen evidence that home sales are bottoming,' said Mr Jim O'Sullivan, senior economist with UBS Securities, in Stamford, Connecticut.
Posted by Richard Yeo at 9:29 PM No comments: