Some deals may be done at valuation but no drop in prices; big flats moving slowly

The private home market is at a standstill and prices have fallen as the global financial crisis scares buyers away.

However, there are increasing signs that this segment of the market is no longer immune to the economic slowdown.

While prices have not dropped, the cash amount that buyers typically pay on top of the flat's valuation has fallen more significantly, experts said.

This cash-over-valuation sum - or what the market refers to as the COV - is usually a must for most transactions, especially in a booming market.

Now that the HDB market outlook is less upbeat, some deals are even likely to be done at valuation, which means no COV is required.

'We started to see the impact of all the bad news only in the past month,' said C&H Realty managing director Albert Lu.

'News of the stock market falling and retrenchments impact buyers' sentiment. Now, they are saying: Maybe we should wait.'

To entice those sitting on the fence, sellers have lowered their COV expectations by as much as 50 per cent, said Mr Lu.

Most COVs now roughly range from $5,000 to $30,000 for selected areas, according to Mr Eugene Lim, associate director of ERA Asia Pacific.

A property agent said she is finalising a deal for an executive flat in Hougang in which the seller is willing to sell at valuation, without any COV.

'I noticed that there are more ads asking for zero cash,' she said. 'Old flats that need a lot of renovation could be sold for zero cash.'

'In view of the current sentiment, HDB resale flat valuations should stay flat going forward,' said Mr Lim. 'So if COV is coming down, prices will eventually come down.'

Prices, however, will not plunge as there is a large base of potential buyers, he said.

Within the HDB market, the segment for small flats will likely be busier than the one for bigger flats. Already, property experts say the market for bigger flats - five-room flats and executive flats - have started to slow down.

This led Mr Lu to project that prices of bigger flats could fall by 1 to 2 per cent in the fourth quarter.

ERA's Mr Lim expects prices of these flats to drop by around 5 to 8 per cent in the first half of next year.

Prices of smaller flats, they said, could remain steady.

While prices are likely to fall, sales volume may hold or even rise going forward, said Mr Lim.

Demand remains strong as there are newly-weds and permanent residents looking for HDB flats.

The demand is evident from HDB's build-to-order (BTO) flat sales. Recently, the sales of its new premium-quality BTO flats at Punggol Arcadia appeared to have met with fairly strong demand, even though they were priced from $356,000 to as much as $416,000 for a five-room unit. There were three times as many subscribers as the number of units available.

'New flats are sold according to what they would fetch on the open market, but with a generous discount which is the subsidy that buyers enjoy,' said an HDB spokesman.

In any case, HDB flat prices are largely more manageable than the price of a private home.

'In challenging times, homebuyers tend to spend less by falling back on what is deemed a safer and more affordable housing option' than private homes, according to a recent ERA study.

It also noted that HDB resale flat sales volume was steady in 1997 when the Asian financial crisis began. The following year, when retrenchments rose, sales volume actually shot up by 57 per cent to 49,618 units.

'Many people were downgrading from private properties to HDB flats,' explained Mr Lim.

It is a scenario that could happen again next year as the economy weakens further, he said.

As to the extent of the price or volume movements for the whole of next year, that will depend on the state of the economy, experts said.

'In view of the current sentiment, HDB resale flat valuations should stay flat going forward. If COV is coming down, prices will eventually come down.'

KUALA LUMPUR - MALAYSIA'S economy is expected to grow by 5.5 per cent in 2008 on increased domestic demand, while fourth-quarter growth is targeted at 3.5 per cent, the prime minister said on Monday.

'If we achieve a growth of 5.5 per cent this year, it is very, very good,' Prime Minister Abdullah Ahmad Badawi was quoted as saying by state Bernama news agency.

Mr Abdullah last month said the growth target for this year had been trimmed to 5.0 per cent and 3.5 per cent for 2009 on softening export demand and slower foreign direct investment inflows.

The economy expanded at 4.7 per cent in the third quarter on a deteriorating global economic and financial crisis, the central bank, Bank Negara, announced on Friday.

The regulating bank had revised upwards second quarter growth to 6.7 per cent from 6.3 per cent while announcing a 7.1 per cent growth in the economy for the first three months of the year.

Mr Abdullah said the public sector should speed up the implementation of projects under a seven-billion-ringgit (S$3.05 billion) economic stimulus package to spur the local economy and increase domestic demand.

'We want domestic consumption to increase and the country's economic growth to also accelerate,' he said.

The spending package, reaped from savings on reduced oil subsidies, is to be spent on 'high-impact' construction projects including roads, schools and low-cost housing.

Bank Negara governor Zeti Akhtar Aziz had said that Malaysia will likely escape a recession next year and post modest growth despite the global financial crisis due to strong consumer demand and public spending.

LONDON - A NEW set of grim figures pointed to a deepening downturn in Europe on Monday after officials painted a sombre picture for Japan and a top auto chief warned of 'massive' job losses in the vehicle industry. 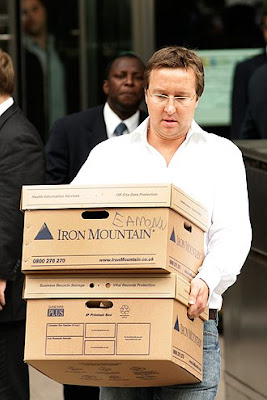 'Job destruction will be massive in those countries that do not rapidly help the auto sector to finance itself,' said Carlos Ghosn, who turned Nissan around a decade ago. -- PHOTO: ASSOCIATED PRESS

Share prices fell in opening European trade after a mixed performance in Asia, with investors on edge ahead of US manufacturing data later in the day that could show the world's largest economy sinking further.

Central banks were meanwhile poised to take further action against the gathering gloom, with interest rate cuts expected later in the week in Britain, the eurozone, Australia and New Zealand.

The Japanese central bank is also preparing new measures to tackle a worsening credit crunch as officials warned the country could slip back into deflation next year.

'There will be a plethora of bad news on economic growth so central banks will need to act boldly to prevent sentiment hitting rock bottom once again,' warned NAB Capital analyst John Kyriakopoulos.

'What is unclear is whether investors react by thinking that aggressive rate cuts will help revive economies down the track or conclude that they indicate economic conditions are even worse than thought,' he added.

With the US auto sector teetering on the brink of collapse the heads of the US Big Three - General Motors, Ford and Chrysler - were to return to Congress on Wednesday and Friday to plead for a 25-billion-dollar rescue package.

'Job destruction will be massive in those countries that do not rapidly help the auto sector to finance itself,' said Carlos Ghosn, who turned Nissan around a decade ago.

'It will not be seen immediately, but in a few years,' he told a symposium in Japan.

The global slowdown has badly shaken auto makers in Japan, where sales of new cars plunged 27.3 per cent in November to 215,783 vehicles, the lowest since 1969, the Japan Automobile Dealers Association said.

German retail sales plunged by 1.6 per cent in October from the previous month, preliminary figures showed, catching analysts by surprise and underscoring by how much consumers are tightening their belts in Europe's biggest economy.

Analysts polled by Dow Jones Newswires had forecast a gain of 0.7 percent.

Germany fell into recession in the third quarter of the year, and economists expect it to last well into 2009.

'Germany is in the grip of a recession which will probably be more severe than widely expected,' Commerzbank analyst Simon Junker said.

'Private consumption does not appear strong enough to alleviate the recession in Germany or bring it to an early end,' he added.

In France a closely watched index of manufacturing activity fell to 37.3 in November, its worst-ever reading.

Across the 15-nation eurozone, of which Germany and France are part, manufacturing activity also hit a record low, with the relevant index falling to 35.6 points last month, the Markit research group reported.

Denmark appeared headed back toward a new recession as its economy contracted 0.5 per cent in the third quarter after briefly flirting with growth a quarter earlier, according to Statistics Denmark.

Denmark became the first European country to enter recession after its economy contracted for two consecutive quarters - at the end of 2007 and in the first three months of this year.

Earlier in the day the head of the Japanese central bank, Masaaki Shirakawa, said Japan's economy 'is likely to continue to show increased sluggishness over the next several quarters,' warning that consumer prices may start to fall again 'for a brief period' in the next fiscal year.

Kaoru Yosano, the economics minister, also said Japan could slip back into deflation, which cuts into corporate profits and deters consumers from spending because they think they can find even cheaper prices in the future.

'I cannot tell you it will be a bright next day,' he told the Financial Times in an interview published Monday.

'We are moving to the next phase of shrinking consumption - some call it deflation - production going down and prices going down.' European stock markets faltered in early trading, with London shedding 1.48 per cent, Paris 1.41 per cent and Frankfurt 1.64 per cent.

Hotel Site At Bukit Chermin Up For Grabs

THE Urban Redevelopment Authority (URA) is offering a hotel site, Bukit Chermin, to developers, despite the weak property market.

The 3ha site, on URA's reserve list - meaning it will go to tender if enough interest is shown - has a maximum permissible gross floor area of 10,000sq m.

URA says it should be developed into a 'distinctive lifestyle hotel' to enhance the appeal of areas known as the Southern Waterfront and Southern Ridges.

The Southern Waterfront is the Harbourfront precinct, including Sentosa, while the Southern Ridges is a 9km stretch of greenery and open space spanning the hills of Mount Faber, Telok Blangah Hill, Kent Ridge and West Coast Park.

Although the Bukit Chermin site is tucked away amid a hilly setting within an exclusive corner of the Southern Waterfront, it is also just minutes from entertainment and recreational amenities such as VivoCity, Sentosa and Mount Faber.

However, industry experts and analysts say that while the site offers niche developers a unique proposition, the current economic downturn is a key stumbling block.

'The Bukit Chermin site is a very interesting and unique site, with possibilities for a boutique hotel development,' said DTZ Research senior director Chua Chor Hoon. 'But in today's climate, in which credit conditions are tight and there remains a lot of uncertainty going forward, I don't think the site will receive any interest from developers.'

'Given current market conditions, I think it is very unlikely to attract any interest at all from the targeted players,' said another property consultant who did not want to be named.

'I think it is safe to say, the URA really is just going through a formality, but nothing is wrong with the URA testing the waters because at the end of the day, who knows? A private developer might just surprise everyone,' he mused.
Posted by Richard Yeo at 7:39 PM No comments: