Raffles Hotel Deal Is Off After All

A CONSORTIUM :led by former Credit Suisse banker Mark Pawley that was to have bought the grand dame has called the deal off, :The Business Times: (BT) reported on Friday.

“We regret to say that the sale will not be completed as planned,” a consortium spokeswoman was quoted as saying. “The consortium is very disappointed with the current outcome as we had hoped for a win-win solution involving all parties.”

A spokeswoman for Raffles Hotel confirmed the news with Today. Both parties declined to give reasons for the deal being called off, citing confidentiality clauses.

The spokeswoman for the buyers, according to BT, also rebuffed suggestions that the consortium might have faced funding problems, saying: “We have the money. To say otherwise is baseless.”

The hotel sale, including the adjoining shopping arcade, was announced on May 8. The deal was reported to be in the range of $650 million.

Fairmont Raffles Hotels International — controlled by Saudi billionaire Prince Alwaleed Talal and American-based private equity firm Colony Capital — had bought over the iconic hotel for $1.7 billion only in 2005. They would have continued running the property through a management contract if the sale had gone through.
Posted by Richard Yeo at 12:09 PM No comments:

Singapore was ranked 11th in the last survey in November last year and 24th in the May 2007 survey, The Business Times reported on Thursday. 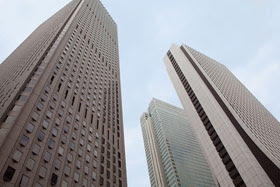 The last time it was one of the 10 expensive office markets in the survey was 1991, when it ranked sixth.

However, on a brighter note - for those concerned about Singapore's competitiveness - the latest survey shows that the island no longer holds the title of posting the highest increase in occupancy costs over a 12-month period.

In the previous survey, published in November last year, Singapore posted the highest 12-month increase in occupancy costs, while in the May 2007 study it took fifth spot.

'The pace of rental growth in Singapore is moderating and we sense that the peak of the market is close at hand,' said CBRE's executive director (office services) Moray Armstrong.

'With significant new office supply coming on stream through the next few years, we are confident that Singapore's medium- to long-term term competitiveness in premises costs is assured.

'It's also noteworthy that the range of alternative lower-cost premises options (for example, business park space) has been bolstered. This is a sign of the commercial property market's growing maturity in response to Singapore's status as a global business city.'

For Q1 this year, the average monthly prime office rental was $16 psf, up 6.7 per cent from the preceding quarter.

'These cost increases are dominated by emerging markets, caused by both supply and demand imbalance and the depreciation of the dollar relative to local currencies. In some of these emerging markets, Class A office space is seriously lacking.'

Overall, Europe, Middle East and Africa dominated the list of markets with the fastest-growing occupancy costs, accounting for five of the top 10 and 19 of the top 50 markets.

CBRE said that its definition of occupancy costs covers rent, plus local taxes and service charges.

The occupancy cost figures are adjusted to reflect different measurement practices from market to market.
Posted by Richard Yeo at 10:19 AM No comments:

Raffles Hotel Won't Be Sold After All

A PLAN to sell the historic Raffles Hotel again has fallen through.
The Business Times (BT) yesterday reported that a consortium led by former Credit Suisse banker Mark Pawley, which had inked an in-principle deal to buy the hotel earlier this month, was 'very disappointed' with the outcome. 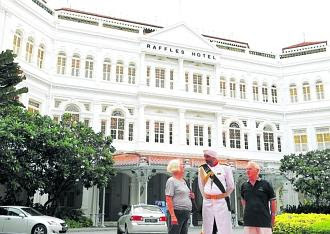 WHAT A PITY: 'This would have involved an assured distinct identity for Raffles Hotel as a flagship for Singapore in the international hospitality industry and a rejuvenation of the hotel.' - SPOKESMAN FOR THE CONSORTIUM, expressing disappointment over the failure to buy Raffles Hotel (above) -- ST FILE PHOTO

Its spokesman confirmed that the deal was off.

'This would have involved an assured distinct identity for Raffles Hotel as a flagship for Singapore in the international hospitality industry and a rejuvenation of the hotel,' the paper quoted her as saying.

Citing confidentiality clauses, she declined to give reasons why the deal soured.

But she denied that there was any issue with the source of the funding, which is believed to be a family trust linked to a European family.

If the deal had gone through, the 121-year-old historic hotel and its adjoining shopping arcade would have changed hands for the second time in three years.

The agreed price was reportedly about $650 million - more than triple the $200 million paid by its American and Middle Eastern owners in 2005.

This was seen as a reflection of the strong boost in demand for hotel space in Singapore in recent years, with the country's fast-growing visitor arrivals.

While he was head of the Asian real estate, gaming and lodging business at Credit Suisse Investment Banking in Asia, he was involved with the $1.7 billion sale of the entire Raffles Holdings' hotel portfolio - including Raffles Hotel in Singapore - to United States-based private equity firm Colony Capital in 2005.

On May 8, FRHI announced that it had reached an in-principle agreement to sell off Raffles Hotel. But as with its past real estate transactions, any hotels sold would continue to be part of the company's hotel collection.

Market watchers told BT that most existing hotel groups would think twice about buying a hotel with a long-term management contract from the seller. They speculated that this clause might have scuppered the deal.
Posted by Richard Yeo at 10:16 AM No comments:

$17m Widening Of CTE To Begin On Monday

1st phase to last till end-2009, but delays to traffic will be minimal

WORK will begin on Monday to widen the Central Expressway (CTE), but officials say the construction will cause minimal delays on Singapore's busiest thoroughfare.
The Land Transport Authority (LTA) will add a fourth lane on both sides of a 1.5km stretch between Ang Mo Kio Avenue 1 and Ang Mo Kio Avenue 3. 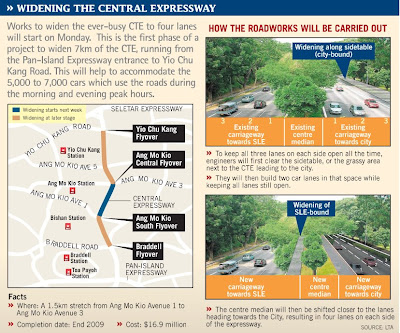 The work, which will cost $16.9 million, is scheduled to last till the end of next year. The LTA said for most of that time, the expressway's six lanes will remain open.

However, it will close after 11pm on some nights for repaving and to remove an overhead pedestrian crossing.

This is the first phase of a plan to ease congestion on the CTE, which is plagued by traffic jams during morning and evening peak periods.

The Ministry of Transport hopes the work, together with the opening of the Circle Line, Kallang-Paya Lebar Expressway and North-South Expressway, will ease congestion on the north-south stretch.

The LTA also plans to expand another 5.5km section of the CTE from the Pan-Island Expressway to Yio Chu Kang Road by 2011.

As part of the project, a new sheltered overhead bridge - replacing the old uncovered bridge - will be built to connect Housing Board blocks with the Serangoon Gardens private estate.

To keep the racket down, the LTA will use noise reduction blankets on its hoardings and put noise guards on machinery.

The authority will also use, for the first time, a more costly method of installing pipes running under the roads.

Unlike the usual 'cut-and- cover' method, where motorists have to be redirected to their lanes, the pipes are laid underground without the need to tear up lanes.
Posted by Richard Yeo at 10:12 AM No comments:

International ratings agency, Moody's, said it has no immediate plans to review its sovereign credit rating for Singapore as the country has strong credit fundamentals, including robust external assets. 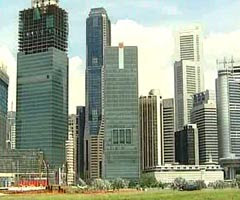 Singapore has the highest triple-A sovereign rating from Moody's, and this is likely to remain so for the next 12 to 18 months.

Last year, Moody's upgraded the rating for six Asian economies – China, Indonesia, Korea, Japan, Hong Kong and Macau. But so far, there have been no such revisions this year, given the slow economic outlook.

Moody's said it is keeping a close eye on rising inflation in Asia.

Thomas Byrne, senior vice president of Sovereign Risk Unit at Moody's Singapore, said: "If inflation is a temporary phenomenon, then it won't have any effect on the ratings.

"However, if it's persistent and it starts to undermine the government's fiscal position, and if it leads to a loss of confidence and therefore external investors or even domestic investors are less willing to finance government budget deficits, then that perhaps would have rating implications if it were strong enough.

"Another factor – which we see elsewhere and not so much in East Asia – is the political instability that comes from higher inflation. There have been food riots in Egypt and also in some other countries in South Asia.

Inflation in Vietnam hit more than 25 percent in May and Fitch has already lowered its outlook for the country's sovereign rating from 'stable' to 'negative'.

Moody's said it is still looking at its numbers and, for now, it maintains a positive outlook for Vietnam.

But other economies in the region are also seeing inflationary pressures and economists said rising prices may threaten the likes of Indonesia and the Philippines.

The Philippine government has been seeking to balance its budget by this financial year, but rising inflation could derail that target, which could have a bearing on its sovereign ratings. - CNA/so
Posted by Richard Yeo at 10:09 AM No comments:

The Land Transport Authority (LTA) will be widening various stretches of the Central Expressway (CTE). 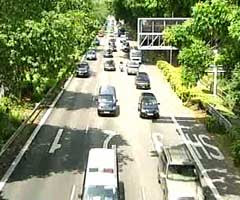 LTA said this is to enhance connectivity and cater to the future population growth in the northeast.

Construction will begin next Monday and it is scheduled to be completed by the end of next year.

Meanwhile, LTA will put up signs about some of the road closures so that motorists can be diverted to alternative routes.

LTA also said three more stretches of the CTE will be widened by the end of 2011 and these fall between the Pan-Island Expressway and Yio Chu Kang Road.

LTA will be calling for contracts to widen these three stretches by the end of the year. - CNA/ms
Posted by Richard Yeo at 9:59 AM No comments:

Channel NewsAsia understands that the Land Transport Authority (LTA) is monitoring some cracks in the houses at Cornwall Gardens Road, where there was a big cave-in last week. 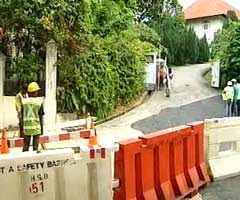 Contractors are doing minor works to ensure that the houses in the area are safe.

LTA, which reopened one lane on Friday, has back-filled the entire road.

Residents living directly opposite the major dent had to move out for two days because the cave-in had cut their water supply and Internet connection.

No one was injured, but the road had to be temporarily closed to traffic, after part of the road caved in on Saturday.

LTA said the crater measured 8 metres by 7 metres, and was 3 metres deep. It is just above a tunnel boring machine where tunnelling works for Circle Line 4 are being carried out.

The area is located between the future Holland and Farrer Road MRT stations. - CNA/ms
Posted by Richard Yeo at 9:56 AM No comments: