The first mortgagee sale of a bungalow on Sentosa Cove - an upscale waterfront housing haunt that was all the rage among well-heeled investors during the bull run - could be in the works. 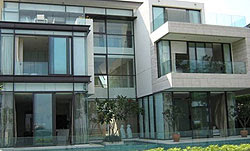 The tide turns: Mortgagees are weighing their options - to sell the upscale waterfront bungalow or to lease it out in the interim, if regulations permit

BT understands that a permanent resident who developed his bungalow on a 99-year leasehold plot on Ocean Drive has defaulted on his mortgage payments and the financial institutions involved are considering whether to sell the property or - if the regulations permit - to lease it out in the meantime.

The two-and-a-half-storey waterfronting property has a land area of about 8,300 sq ft. The first storey has a swimming pool, separate living and dining areas, wet and dry kitchens and a guest room. The second level has a total of five bedrooms, each with an attached bathroom. The attic has an entertainment room.

A couple of bungalows on Sentosa Cove were put on the auction block last year. One, which had been put up for sale by its owner, was offered at an October auction conducted by DTZ. There were no takers at the asking price of $18 million, which reflects about $2,300 per square foot based on the bungalow's land area of 7,800 sq ft. The Singaporean owner, who has lived in the unit, is now trying to sell the unit by private treaty, said Shaun Poh, DTZ senior director for investment advisory services and auction.

The asking price being sought is similar to the level that boutique developer Wah Khiaw is also said to be quietly seeking for a couple of completed and leased bungalows, which are also along Ocean Drive.

However, industry observers say that such asking prices are considered steep in today's market. A more realistic price level for bungalows on Sentosa Cove today would be around the $11-12 million range or about $1,300 to $1,700 psf of land - but even then they would get 'a good run for their money' from freehold Good Class Bungalows on mainland Singapore. 'For about $10-11 million, one could get a 'decent' GCB in a liveable condition in say, Yarwood Avenue in the Dunearn Road area,' a property agent pointed out.

'Sentosa Cove has lost its appeal in today's market. A couple of years ago, this kind of waterfront living was the in-thing, when people had money, credit was easy and foreigners were rushing to buy such properties, especially with the expedited approval channel for foreigners to buy landed homes on Sentosa Cove. In today's market, foreigners have suffered the most.

'As for Singaporeans, they may still not be used to the idea of waterfront living. If you drive at Sentosa Cove on weekdays, you can see many empty completed bungalows. Some families have lived in the units but find the location inconvenient, for example, ferrying children to and from school,' the agent said.

'They would much prefer the convenience of owning a freehold GCB on mainland. The way I look at it, selling bungalows on Sentosa Cove is going to be very difficult in the near future,' he added.

DTZ's Mr Poh also revealed he is working with a few other Singaporeans keen on selling their Sentosa Cove bungalows. 'In the past, many Singaporeans had bought sites for bungalow development with the intention of selling the completed properties to foreigners. But in the current climate, that's going to be tough. So these sellers will have to be realistic in their pricing as they'll face competition from both foreigners and Singaporeans trying to divest their bungalows on Sentosa Cove,' he said.

Mr Poh also reckons the market for landed waterfront housing on Sentosa Cove has yet to mature among Singaporeans, who might take some time to catch on to a lifestyle of having their own bungalows, with their own jetty to moor their yacht outside their garden. 'Even among valuers, there can be a wide variation of opinions on valuations of such homes, especially when there haven't been many transactions,' he said.

Agreeing, CB Richard Ellis executive director (valuation) Li Hiaw Ho said there have hardly been any transactions of bungalows on Sentosa Cove. 'While we all know values have dropped, it is harder to pinpoint the extent of the drop until there is more evidence of transactions.'
Posted by Richard Yeo at 12:14 AM No comments:

THE hunting season seems have begun in the property market, with at least four buyers making a killing.

A UBS report says that according to URA data, four recent sub-sales have been transacted at 20 per cent below launch prices.

'Prior to this, we believe there has not been a single sub-sale transaction more than 11 per cent below the new sale price for the same unit,' said UBS analyst Regina Lim.

UBS believes that the sharply lower sub-sale prices signal a major change in buyers' risk appetite and the outlook for Singapore residential property.

It noted that some projects sold in 2006 and expected to be completed by Q4 this year could be the subject of defaults by buyers if sub-sale prices fall 30 per cent below launch prices.

'This is especially as 40 per cent of buyers of new apartments above $1.5 million were foreigners or companies in 2006 and 2007, and it may be difficult not to repudiate the sale-and-purchase agreements for these buyers if they default,' UBS said.

Cushman and Wakefield managing director Donald Han said that he does not expect many sub-sales to be transacted at big losses because developments that will receive their temporary occupation permit (TOP) this year - and hence, requiring loan draw-downs - are likely to have been launched in 2006 before prices peaked.

Still, prime properties are likely see the biggest drop in prices, as these rose the most in the past few years, he said.

In its report, UBS says that prices in the primary market have also been cut.

Sands Puts Eggs In S'pore Basket, Will Open On Time

Las Vegas Sands (LVS) needs US$4 billion to complete the Marina Bay Sands (MBS) and says reassuringly that it currently has US$6.2 billion in borrowings and liquidity.

Speaking at an investor conference in the US, LVS president and COO William Weidner said that its 'revised business plan', which includes the monetisation of non-core assets, has put the company in a cash position (borrowings and liquidity) of US$6.2 billion.

While LVS has 'moth-balled' development of sites five and six at the Cotai Strip in Macau, it is also developing other projects concurrently in the US, notably the Sands Bethlehem.

However, part of LVS' revised business plan includes massive cost cutting at its Las Vegas operations. 'If we take a look at our plan and the risk to that plan, the risk is the underperformance in Las Vegas. We are mitigating that by a tremendous amount of cost cutting,' Mr Weidner said.

He revealed that LVS expects to cut US$100 million in cost in 2009 by cutting expenses, labour, head count and benefits. 'Everywhere that doesn't effect the customer experience, we are cutting, cutting, cutting,' he said.

Indeed, LVS will be focusing on opening MBS on time. 'Our focus is on the current operating environment and stickhandling through 2009 to the opening of Singapore (MBS),' he said.

And for good reason too.

By cornering a good chunk of the 4- and 5-star hotel market around Marina Bay, Mr Weidner projected that with its 2,600 rooms, and an average daily rate of US$269 per room by 2011, LVS hopes to rake in an ebitda (earnings before interest, taxes, depreciation and amortisation) of US$161 million. He also forecasted a rental revenue from its retail component at US$179 million.

More important is that assuming a gross revenue of US$2 billion for MBS, which is about the same as its Macau operations currently, Mr Weidner said that earnings generated from the US$2 billion revenue in Singapore would amount to US$940 million because of the favourable tax regime compared to only US$504 million in Macau.

Mr Weidner's bullish comments come after a particularly tough quarter fraught with speculation that LVS could file for bankruptcy. In November, it had made a regulatory filing that said it was unlikely to meet the maximum leverage ratio covenant, triggering defaults on loans needed to complete projects.

Since then, LVS has announced that it has raised US$2.1 billion of capital.

Addressing the issue of debt, Mr Weidner said: 'The debt that we have is extraordinarily valuable. No one can generate about US$9.8 billion of debt at a blended rate of about 5 per cent in this environment.'

Confirming the opening of Marina Bay Sands, a spokesman for MBS said it is still targeted to open by the end of 2009.
Posted by Richard Yeo at 12:10 AM No comments:

建屋发展局本月2日推出150个二房和三房式单位，申请活动昨天截止。截至下午5时，共有1653人申购150个单位，销售情况红火。这些单位当中约三分之二位于盛港和榜鹅新镇，其余遍布全岛。
Posted by Richard Yeo at 12:06 AM No comments: