Property Scene Not Too Frothy: CDL

PROPERTY tycoon Kwek Leng Beng believes the Government may try to cool the property market - if it gets too frothy - by resuming its regular land sales programme as a way to boost supply.

However, the City Developments (CDL) chairman also said yesterday that the current buying momentum can be sustained and should not be seen as over-exuberant.

He was speaking at a press conference during which CDL unveiled its second-quarter results - another weak set of figures.

Mr Kwek said the recent resurgence in property sales should be put into context.

'It should not be viewed as over-exuberant or extraordinary, bearing in mind that developers had put on hold many of their launches in 2008,' he said.

He added that property prices for the low- and mid-tier market had yet to recover since their peak in 1996.

In response to a question on whether the Government would introduce any cooling measures, he said: 'I think Mr Mah (Bow Tan) is correct to say he doesn't want a bubble to be built, but I don't know if he is going to introduce (any measures).

'Probably what he would do is offer a confirmed list. The deferred payment scheme has already been abolished. Maybe he will abolish interest paid for on behalf of the buyer.'

Mr Mah, the Minister for National Development, warned on July 29 against a property bubble forming and speculation creeping back into the market. He vowed to 'take whatever action is necessary'.

Mr Kwek said the Government would have to approach this decision carefully.

'Don't forget that the Government's statement is that the market is still uncertain. In an uncertain time if you press the wrong button, it will be a disaster. I'm a strong believer that whatever the Government is going to do, they have to think very carefully and they will,' he said.

With a confirmed list, sites are put up for tender at scheduled dates, regardless of developers' interest. It is a way of forcing supply into the market.

The Government suspended confirmed list land sales last October, but Mr Mah has suggested that it could be reintroduced in the first half of next year.

The interest absorption scheme allows buyers to defer the bulk of their payments until their units are completed.

Mr Kwek said that the low property prices in the market were a result of developers being realistic.

He added: 'I am always afraid to encourage people not to buy, because especially in a low market, if you encourage not to buy and the market goes up, they lose the opportunity of buying cheap.

'If you are smart, you make money; if you're not smart, you speculate, you lose your pants. Nobody in this world can really predict whether the market is going up or down.'

He said property investors should take a medium- to long-term perspective.

Mr Kwek said that he hoped to resume construction of CDL's stalled South Beach project as soon as practicable, adding that it would probably be in the third quarter of next year and be completed before 2016.

He added that CDL and Hong Kong property group Nan Fung, the newest investor in the consortium, would be willing to pump more money into the project should the need arise.

The $2.5 billion project, originally slated for completion in 2012, had been delayed by the financial crisis.

Mr Kwek said the other two Middle Eastern partners, El-Ad and Dubai World, had other priorities.

Under the terms of the agreement with the Government, the consortium has till 2016 to complete the project.

Mr Kwek said that the partners are on very good terms, but that CDL is taking the lead and has Nan Fung's support.

CDL's second-quarter net profits were down 15.3 per cent from the same period last year to $140 million as hotel occupancies kept falling. Revenue edged up 0.8 per cent to $787 million.

One positive trend: net profits shot up 68.3 per cent from the first quarter, in line with a gradual global recovery.

The group's net profits do not include valuation differences arising from investment properties.

Revenue for the second quarter was split almost evenly between hotels and its property development and rentals segments.

Revenue from hotels was hit bad, dropping 25.2 per cent to $364.5 million in the second quarter from the same period last year. Occupancy rates had fallen across Asia, Europe and the United States.

However, CDL was able to realise profits from beginning the construction of The Arte @ Thomson last year even before its launch in March this year.

Move in line with plans for development of Jurong Lake District

CONNECTIVITY for commuters in Singapore's west will soon be ramped up with a brand new bus interchange at Boon Lay and an expanded road network in Jurong East. 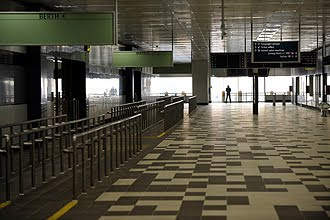 The 20,000 sq m Boon Lay integrated bus interchange, which will be linked to the MRT station and retail shops, will have the greatest number of bus services - 31 in total - when it opens at the end of the year. -- ST PHOTO: MUGILAN RAJASEGERAN

The 20,000 sq m, fully air-conditioned interchange is set to see buses rolling out during the year-end school holidays.

Costing $24 million, it will be Singapore's biggest and most expensive bus interchange to date. It will also have the greatest number of bus services - 31 in total. 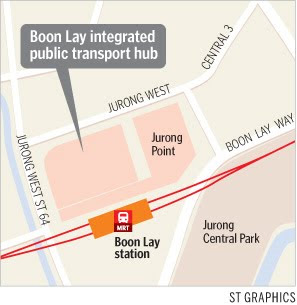 When it is open, Boon Lay will be the fourth town to have an integrated public transport hub, in which the bus interchange and MRT station are seamlessly linked with retail outlets.

The other integrated hubs are in Toa Payoh, Ang Mo Kio and Sengkang, while Clementi and Serangoon are expected to get air-conditioned bus interchanges in 2011.

Commuters using the new Boon Lay bus interchange can get to it through multiple entrances.

An escalator from the third floor of Jurong Point 2, near the NTUC FairPrice supermarket, will also take shoppers directly to the bus interchange. 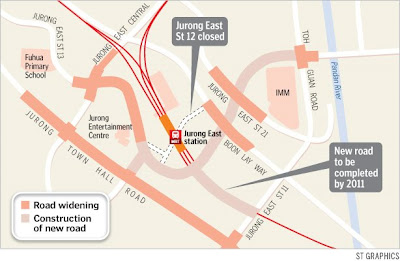 Over in Jurong East, motorists can look forward to smoother traffic flow as the Land Transport Authority (LTA) adds two new roads to the estate.

An LTA spokesman said traffic demand is expected to go up in the town as plans for the Jurong Lake District take shape.

Read the full story in Friday's edition of The Straits Times.
Posted by Richard Yeo at 12:16 AM No comments:

Cheated Of Property And $1.2m

CHEATED of their property when their lawyer forged their signatures to seize ownership, three brothers had to come up with another $700,000 to prevent the bank from selling off the building. 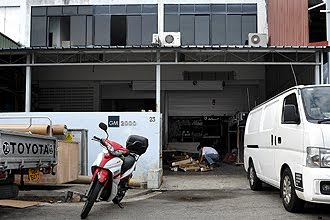 Yesterday, their five-year-long plight finally ended when the High Court ordered the rogue lawyer's name to be removed from the property title deed and replaced by their names instead.

The brothers, Mr Sim Chiang Lee, Mr Sim Sien Tong and Mr Sim Ah Ban, now in their 50s and 60s, were partners and shareholders in a family business that included provisions, hardware and realty.

Their ordeal began in March 2004 when then lawyer Sivakolunthu Thirunavukarasu, now 51, forged their signatures and transferred ownership of a factory they had purchased to her name.

Among other things, Sivakolunthu drafted documents that made out that the three brothers had sold the premises in Chai Chee to her.

To cover her tracks, she included one of the brothers, Mr Sim Chiang Lee, as co-owner with her.

The forged documents stated that Sivakolunthu owned 75 per cent of the property - worth $1.4 million - while the remaining 25 per cent was supposedly in Mr Sim Chiang Lee's name.

The lawyer then mortgaged the property to a bank for a $700,000 loan by forging Mr Sim Chiang Lee's signature, and skipped town in May that year.

She is still on the run. 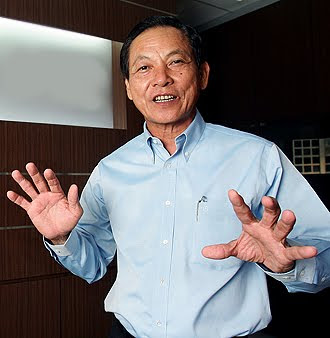 Mr Sim Ah Ban (left) and his brothers lost a total of $1.2 million to their rogue lawyer. They, however, managed to get $226,000 in rent for the leased-out period. -- ST FILE PHOTO

In August 2005, after her fraudulent work was uncovered, the bank acted on the mortgage default and the brothers had no option but to pay up or see the bank sell off the premises.

The bank took its case to the High Court, which confirmed it had a valid mortgage, which could be enforced.

The brothers contested the move all the way to the Court of Appeal where they lost and have yet to settle the legal costs of the move.

One small compensation was the brothers were entitled to the rent from the building, which had been leased from the time Sivakolunthu was found out. They received $226,000 in January this year.

Altogether Sivakolunthu swiped $2.4 million from more than a dozen victims in early 2004, by mortgaging four properties, but the Sim brothers suffered the most.

They lost $1.2 million as she also swiped $500,000 which they paid into the clients' account of the law firm she worked in.

The Sim brothers, who were represented by lawyer Philip Fong of Harry Elias Partnership, were all shareholders and partners in several businesses they ran, including Sin Aik Provision Store, Sin Aik Realty and Sin Aik Hardware.

Contacted last night, Mr Sim Ah Ban expressed disappointment that Sivakolunthu remains missing and said he was in no mood to talk.

Their case was among those cited by the Law Ministry recently when it proposed new rules for the handling of money in property deals.

Under the proposals, now the subject of a public feedback exercise, lawyers will no longer be allowed to handle conveyancing monies and deposits will be placed with approved institutions.

In the past five years, five rogue lawyers have absconded with almost $20 million of their clients' money; four are yet to be caught.

A fifth, Victor Tan, who handed himself to police in late 2007, is currently behind bars serving a 54-month sentence after being convicted of misappropriating $32,000 from a client.
Posted by Richard Yeo at 12:13 AM No comments: