Buyers Snap Up Flats At Trevista Condo In Toa Payoh

IF it's priced attractively, it still sells. Hungry home buyers yesterday bought around 320 units at the 590-unit Trevista condo in Toa Payoh. 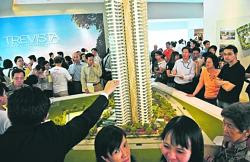 By around 3pm yesterday, buyers were said to have snapped up some 190 of the total 210 units released in the first phase of the preview, resulting in developer NTUC Choice Homes Co-operative releasing a further 190 units in the early evening to satisfy demand. BT understands that the price was raised by about 2-3 per cent for the second batch from the initial phase's average price of $898 per square foot (psf). However, some of the price gain also reflects the fact that units in the second batch are on higher floors and have better orientation.

While many people will baulk at this price for a 99-year leasehold project, what has been drawing buyers to Trevista is that the psf pricing is about 20 per cent lower than the closest competition from a comparable recently launched project - Far East Organization's Centro Residences next to Ang Mo Kio Hub, which was released last month at an average price of $1,150 psf. However, Trevista's units are generally bigger than Centro's so in absolute dollar quantum per unit, the price difference between the two projects may be less.

The smallest units at Trevista - studios and apartments with one bedroom plus study - were the first to sell out yesterday. Some agents were seen armed with blank cheques from clients keen to secure the better units and who had given them authorisation to book units on their behalf.

Choice Homes CEO Margaret Goh had noted on Thursday that Trevista is the first private condo to be launched in the mature Toa Payoh estate since 1996. That was when City Developments Ltd launched the freehold Trellis Towers at an initial average price of $900 psf, according to newspaper reports at the time.

With 400 units or two-thirds of the total units in Trevista released by yesterday evening, Choice Homes stopped issuing queue numbers after 9pm and told those streaming into the showflat site to return the next day.

The co-op is expected to make further units available over the weekend to cater to demand. Trevista comprises a total of 590 units in three 39-storey towers. It is being marketed by CB Richard Ellis and ERA.

Developers sold 10,017 private homes in the first seven months of this year - more than double the 4,264 units in the whole of 2008 when home buying dried up due to the global financial crisis. The unexpectedly strong sales pick-up since February this year came about after developers cut prices. However, they have since been raising prices for some projects - and that has resulted in generally slower take-up.
Posted by Richard Yeo at 1:34 AM No comments: 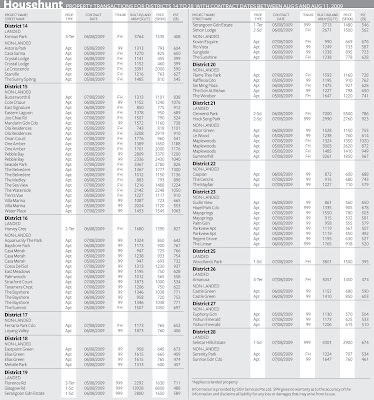 Posted by Richard Yeo at 1:31 AM No comments:

WHAT ghost month? The traditional lull in home-buying activity during the Hungry Ghost month has been swept aside amid the current property market frenzy.

Buyers were out in force on Friday at the preview of Trevista, a new 590-unit condominium in Toa Payoh, a traditional heartland area. -- ST PHOTO: MUGILAN RAJASEGERAN

Buyers were out in force on Friday at the preview of Trevista, a new 590-unit condominium in Toa Payoh, a traditional heartland area. A queue had formed at least 20 minutes before the showflat doors opened at 2pm. By 5pm, all 210 units released for sale had been snapped up by buyers.

Developer NTUC Choice Homes had said it would release just those units for sale this weekend at an average price of $898 per sq ft (psf). However, the response was so strong that it released another 190 units at higher prices just after 8pm, said a spokesman. She could not say how much higher the prices were.

Of the 210 units, the two-bedders averaged $830,000 while the three- and four-bedroom units averaged $1.065 million and $1.43 million respectively under the normal payment scheme. Owner-occupiers were eyeing the bigger units while investors were mostly keen on the small units.

The market was expecting big crowds at Trevista as it is the first condo to be launched in the mature Toa Payoh estate since 1996. ERA and CBRE are marketing agents. There was talk that plenty of blank cheques were collected prior to the preview. Some agents expect a sell-out.

It appears that the Hungry Ghost month from Aug 20 to Sept 18 is not an issue for these buyers even though many Taoist households in Toa Payoh burn incense during the month in the belief that this will appease the spirits. Many buyers would have been from the local area.

The property market traditionally goes into a lull during this period as some Chinese consider it inauspicious to buy a house at this time. But in recent years, practicality has often overridden superstition, agents say.

'Some developers may want to wait until the end of the ghost month to launch but those with launch-ready projects will want to capitalise on the buying momentum,' said Savills Residential director Phylicia Ang. 'There are a lot of young buyers who are not very superstitious.'

Also, when the market is slow, buyers may stick to their superstitious beliefs but when the market is hot and a good investment opportunity presents itself, they will not hesitate to jump in, lest they miss the boat, explained Ms Ang.

Another freehold project, Trizon @ Mount Sinai by Singapore Land, will start its public preview today at $1,300 psf to $1,500 psf.

Some units have been sold as a staff preview and a sale exhibition in Jakarta was held recently, sources said.
Posted by Richard Yeo at 1:28 AM No comments: