Sold Out In 3 Days

SINGAPORE may still be mired in recession, but tell that to the home hunters who are flocking to the latest launches.

In the east, a new 297-unit condominium development on the doorstep of Tanah Merah MRT station completely sold out in the three days that followed its preview last Thursday. 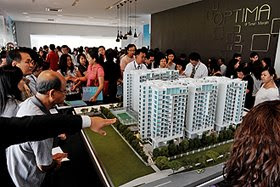 Optima developer TID had to conduct a ballot of 120 units for 300 buyers. -- ST PHOTO: STEPHANIE YEOW.

Demand remained strong even after developer TID - a joint venture between Hong Leong Group and Mitsui Fudosan - raised prices by 5per cent, from $790 psf on Thursday to $830 psf by Friday.

Keen buyers were already seen queueing days before the launch of the 99-year leasehold condominium.

And TID had to conduct a ballot of 120 units for 300 buyers just before midnight on Thursday to prevent them having to camp out overnight for the public launch the next day.

Buyers were a good mix of HDB upgraders and investors, said the Hong Leong Group spokesman.

City Developments has now put on fast track the launch of its 396-unit project at the former Hong Leong Garden condominium site.

Over in Ang Mo Kio, another new suburban launch has attracted relatively strong demand, though some price resistance may have settled in over the weekend.

The 329-unit Centro Residences has sold 93 out of the 144 units that were released for sale last week.

Most of the units sold were two- to three-bedders. The smallest two-bedders have been sold, leaving those from 872sqft and above, and priced from $1million.

Far East Organization said yesterday that 50per cent of the buyers are HDB upgraders from nearby towns, while the rest are residents from private estates.

'Such prices can get you a freehold condo in Upper Bukit Timah,' said Mr Nicholas Mak, a former property consultant. 'Buyers should be a bit more rational. Demand at such price levels shows that some buyers may be getting carried away by the current euphoria.

'If they are hoping for capital appreciation, they must ask themselves who is going to buy from them at an even higher price when a three-bedroom unit in a suburban project is usually priced less than $1,000 psf,' he added.

Elsewhere, some other fairly new launches continued to attract buyers, but at a much slower pace.

Waterfront Key in Bedok Reservoir sold another eight units at an average price of $735 psf, bringing total sales to 193 out of 278 released units.

At the 329-unit The Gale in Flora Road, sales remained around the 90per cent level cited late last week.
Posted by Richard Yeo at 11:51 PM No comments: