Sands: IR Will Go On

CASINO operator Las Vegas Sands issued a statement on Friday evening to reassure Singapore that its US$4.5 billion (S$6.7 billion) integrated resort in Marina Bay there is still on. This comes amid fresh doubts raised by its auditor PriceWaterhouseCoopers that the company may not be able to continue operating. 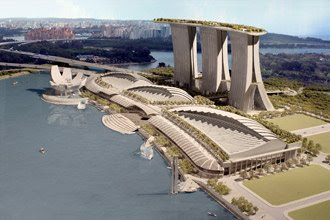 Las Vegas Sands Corp chairman and chief executive officer Sheldon Adelson said: 'When we were selected to develop an Integrated Resort at Marina Bay, we made a commitment to the Singapore Government and the people of Singapore. In light of recent turmoil in the global markets, I felt the need to personally reaffirm our commitment to the success of Marina Bay Sands. I am pleased to say that the Singapore Government's support of our project remains strong.'

Top executives from the company met up with Singapore Government officials this week to discuss its rate of construction and joint marketing effort with the Singapore Tourism Board to bring more conventions, exhibitions and corporate meetings to the Republic.

They also said that it has received approval from the Casino Regulatory Authority of Singapore to have up to 1,000 gaming tables. The final layout, however, is subject to approval when the IR applies for its licence next year.

Mr Adelson said the approval represents a 'significant milestone' and that the company is still 'aggressively' moving towards its opening.

The company's stock prices dropped 32.7 per cent on Thursday to US$7.85 following the bad news from the regulatory filing.

Its auditor PriceWaterhouseCoopers had said in a regulatory filing that the casino operator, which has an US$8.8 billion long-term debt at the end of June will not be able to meet lenders' requirements unless it cuts spending on developments, boosts earnings at its Las Vegas Strip casinos and raises more capital.
Posted by Richard Yeo at 9:29 PM No comments:

委员会将在整理这些意见后，在明年第一季推出报告书，制定未来10至15年的发展策略，提倡环境的可持续发展。
Posted by Richard Yeo at 9:24 PM No comments:

BERLIN - GERMANY is being pummelled by the global economic slowdown and is already in recession, economists said on Thursday as data showed company order books in the world's top exporter emptying fast.

Orders for goods made in Europe's biggest economy plunged eight per cent in September from August, the economy ministry said, the steepest fall since East and West Germany reunited to become one country in 1990. Analysts called the slide 'disastrous'. The downturn, revealed a day after Chancellor Angela Merkel unveiled a multi-billion-euro stimulus programme to try and avoid the worst effects of a global slowdown, was much worse than expected.

The data were released as the European Central Bank, the Bank of England and the Swiss National Bank all slashed their main interest rates in a dramatic escalation of global efforts to stave off recession.

Orders from outside Germany, which accounts for a third of euro zone activity, slumped 11.4 per cent while domestic orders fell 4.3 per cent, with all sectors registering falls.

On a less volatile two-month comparison the decline was less dramatic, with orders in August and September off 1.4 per cent compared to June and July.

'All in all, the fall in orders experienced since December 2007 is accelerating. As a result, prospects for industrial production remain gloomy for the coming months,' the economy ministry said.

'Now that large parts of the industrialised world have already slipped into recession and others are likely to follow, new orders for German products are falling accordingly,' UBS economist Martin Lueck said, calling the data 'disastrous'.

Exports, which account for up half of Germany's economic output, will fall 2.5 per cent in 2009, which would be the worst performance since the recession of 1992-93, Mr Lueck predicted.

The numbers are 'another clear indication that the German economy is in a recession,' Commerzbank economist Simon Junker said.

The German economy shrank in the second quarter and GDP figures next Thursday are expected to confirm that output also fell in the July to September period, meaning the country is officially in recession.

But what Thursday's numbers prove is that conditions are going to get a lot worse, and that Germany has been hit hard since the mid-September bankruptcy of US banking giant Lehman Brothers pushed the global financial system close to collapse, economists said.

This is borne out by a string of recent highly downbeat assessments of conditions in the real economy from German companies, not just car giants like BMW and Daimler but also in other sectors. Sportswear firm Adidas on Thursday said that uncertainty was so high it could not give a forecast for 2009.

Berlin has slashed its 2009 growth forecast to just 0.2 per cent, the slowest rate of growth since Germany last suffered a recession in 2003.

Third-quarter growth figures are due to be published next Thursday. -- AFP
Posted by Richard Yeo at 11:04 AM No comments:

WASHINGTON - THE International Monetary Fund on Thursday forecast advanced economies would contract next year for the first time since World War II and called for government spending to battle the global financial crisis. 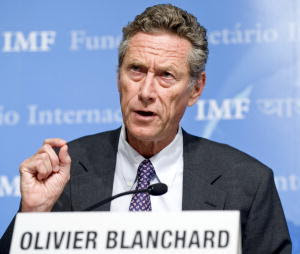 'Our forecasts are based on current and currently announced policies. It is likely that policies will be more expansionary than we assume,' IMF chief economist Olivier Blanchard said. -- PHOTO: ASSOCIATED PRESS

In sharp downward revisions to its last economic projections made less than a month ago, the IMF said the advanced economies were now seen shrinking by 0.3 per cent in 2009, instead of the prior estimate of 0.5 per cent growth.

It lowered its global economic growth forecast by 0.8 point to 2.2 per cent.

'Prospects for global growth have deteriorated over the past month, as financial sector deleveraging has continued and producer and consumer confidence have fallen,' the IMF said.

'In advanced economies, output is forecast to contract on a full-year basis in 2009, the first such fall in the post-war period,' the 185-nation financial institution said in an update of its October World Economic Outlook (WEO) report.

The IMF said the downturn in advanced economies would be 'broadly comparable in magnitude' to recessions in 1975 and 1982, but that 'a recovery is projected to begin late in 2009'.

Next year almost all the advanced economies would contract: the United States (0.7 per cent), Japan (0.2 per cent) the euro zone (0.5 per cent) and Britain (1.3 per cent). Only Canada would resist the downturn, with 0.3 per cent growth.

'Our forecasts are based on current and currently announced policies. It is likely that policies will be more expansionary than we assume,' IMF chief economist Olivier Blanchard said at a news conference. 'We'll advocate at the G20 a global fiscal expansion.'

IMF managing director Dominique Strauss-Kahn is to attend a finance chiefs meeting of the Group of 20 rich and emerging countries this weekend in Sao Paulo, ahead of a G20 summit convened by US President George W. Bush on Nov 15 in Washington.

'There is a clear need for additional macroeconomic policy stimulus relative to what has been announced thus far, to support growth and provide a context to restore health to financial sectors,' the IMF said.

Asked which countries would have the most scope and the most need for fiscal action, another IMF economist, Mr Joerg Decressin, said the United States, 'Europe and especially Germany', and China.

The IMF said it now sees far more difficult conditions worldwide since its Oct 8 WEO report as a result of a global credit crunch that has hit banks and financial markets.

'Markets have entered a vicious cycle of asset deleveraging, price declines, and investor redemptions,' the IMF said. 'Beyond the direct impact of the financial crisis, activity is increasingly being held back by slumping confidence.'

'As the financial crisis has become more entrenched, households and firms are increasingly anticipating a prolonged period of poor prospects for jobs and profits. As a result, they are cutting back on consumption, notably of durables, and investment.'

The IMF said the United States, the epicentre of a financial crisis that erupted in August 2007 after the collapse of the subprime mortgage market, would still show positive growth for 2008, but at a tepid rate of 1.4 per cent, with the second-half contraction offsetting growth in the first six months of the year.

Emerging and developing countries remained the growth engines for the global economy, but at a slower rate of 5.1 per cent in 2009.

The IMF slashed its 2009 forecast for developing countries in Asia by 0.6 percentage points to 7.1 per cent.

'Countries in East Asia - including China - generally have suffered smaller markdowns' than other economic powers, it said, forecasting China's growth at 8.5 per cent in 2009.

'Their financial situations are typically more robust, they have benefited from improved terms of trade from falling commodity prices, and they have already initiated a shift toward macroeconomic policy easing.' -- AFP
Posted by Richard Yeo at 11:02 AM No comments:

LAS VEGAS - Las Vegas Sands, the international casino empire run by billionaire Sheldon Adelson, must raise new capital or slash development spending, or both, by next month to keep its lenders at bay, the company said on Thursday.

News that the company might break its loan agreements sent its shares plummeting 33 per cent. 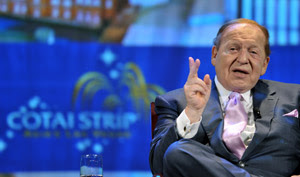 Mr Adelson, whose personal wealth is largely tied to his ownership in Sands, has seen his stake's value plunge along with the company's stock price, which has dropped 93 per cent over the past year.

At one point his shares were worth some $30 billion (S$45.1 billion), making him this country's third-richest person, but as of Thursday's stock price that value had shriveled to US$1.9 billion.

If Sands can't raise capital and does default on portions of its long-term debt, estimated at US$8.8 billion by Thomson Reuters, the company said it would have to suspend some, if not all of its development projects.

Instead, the Las Vegas-based company hopes to boost earnings in its hometown, the company said in a Securities and Exchange Commission filing on Thursday.

But casino revenue has been down for months in Vegas amid cutbacks on travel. Also, those who do come to here have gambled less and spent less on non-gambling activities.

The drop has been especially severe in Mr Adelson's specialty, midweek convention business. As of August, overall convention business for all companies in Las Vegas had dropped 23.6 per cent to US$777 million for the first months of 2008.

The company said it is evaluating projects in various stages of development in Las Vegas, Pennsylvania, Macau and Singapore, and is meeting with a financial advisor to explore ways to raise capital.

Mr Adelson, 75, worked as a financial adviser and real estate investor before building casinos. He created the technology trade show Comdex in 1979, which he sold it to Japan's Softbank for US$860 million in 1995.

Mr Adelson then bought the Sands Hotel and Casino, former home to the Rat Pack, in 1989. Seven years later, he was inspired by his honeymoon in Venice to erect The Venetian in its place, a US$1.5 billion casino resort. The 4,027-room Venetian combined with the 3,066-suite Palazzo makes Las Vegas Sands operator of the largest property under one roof on the Las Vegas Strip.

'This has the market spooked,' said Mr Robert LaFleur, an analyst with Susquehanna Financial Group.

Mr Adelson and his wife, Mrs Miriam Adelson, personally loaned the company US$475 million in October so Sands could escape a similar predicament in the third quarter. Company spokesman Ron Reese said it could not comment beyond its regulatory filings until it reports its third-quarter earnings this month.

In an interview in October, Mr Adelson said Las Vegas Sands was looking to raise US$2 billion in debt financing from Asian banks to finish work on some Macau expansion projects. The casino mogul controls nearly 70 per cent of Las Vegas Sands personally and through family trusts. -- AP
Posted by Richard Yeo at 10:57 AM No comments: