Property 101: Prices Can Go Down

Judging from the brisk sales at launches, it appears many Singaporeans have jumped on the runaway property bandwagon.

But before you get caught up in the sales pitches and showroom euphoria of property agents cheering as each unit is sold, industry players warn that you should step back, take a breath and think twice. 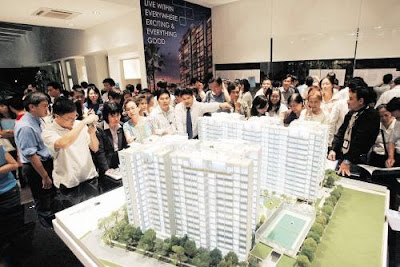 Enthusiastic crowds at the Optima at Tanah Merah.

This, they say applies to both HDB upgraders as well as those looking for a second property to spruce up their financial portfolio. Here are a few pointers that ought to be at the back of your mind.

It may sound obvious but it is often forgotten. Consider upgrading only if there have been significant changes in your credit profile, say, a pay rise and if your appreciating assets are holding up, said PropNex chief Mohamed Ismail.

If you're upgrading from HDB, think about your net proceeds and what you can put into a new property to reduce your loan. Work out how much you need to pay each month. Be prudent and do not over-leverage. Consider the repayment period. Banks typically limit loan repayments to about 40 per cent of your gross monthly income.

Make sure you factor in other debts, expenses and what you need to save.

"Buy a property that will not overstretch your finances while maintaining a lifestyle of your desire," Mr Ismail said.

Choose your home loan carefully. Interest absorption schemes may seem attractive but you may typically end up paying 2-3 per cent more for the entire property.

If you plan to rent out the property, your monthly rental should ideally cover your mortgage instalments.

As an owner-occupier, you should think about transport options. If you're an average HDB dweller, you would do well to choose a property near an MRT station, said Mr Chris Koh, director at Dennis Wee Group.

If you're looking for capital gains or renting out the property, proximity to a MRT station is even more important as tenants (the foreign ones in particular) are looking for convenient public transport options to take them round the island.

Also check out which direction the unit is facing and the project's surroundings.

3. Maintenance and other BILLS

Consider how much you will need to furnish or renovate the new apartment, advised Dennis Wee Group's Mr Koh. Also factor in maintenance charges each month - how much more you will be paying for service and conservancy, parking and other charges.

Your HDB property may fetch a tidy sum now, but what about in two years when your private property obtains its Temporary Occupation Permit. Unless you intend to keep your HDB flat for rental, you should consider whether you to sell now or later.

If you choose to sell now, you need to think about where you will live in the meantime and the costs you will incur.

Be aware that property prices fluctuate and prices may not return to the level at which you bought the property.

"If you can sleep through that, have really no regrets, you like the property and lifestyle, then well and good," said Ngee Ann Polytechnic real estate lecturer, Nicholas Mak. "But don't put everything into a private property thinking that prices will only go in one direction - up."
Posted by Richard Yeo at 12:30 AM No comments:

The Laguna Park estate in the Marine Parade area is up for collective sale, with an asking price of S$1.2 billion, according to its marketing agent Credo Real Estate. 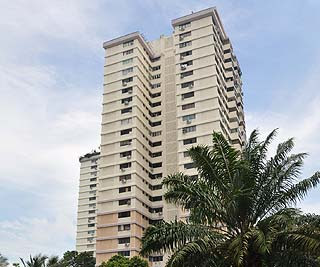 This could potentially be Singapore's second billion-dollar en-bloc deal, after Farrer Court in 2007.

If the en-bloc sale goes through, this parcel could eventually accommodate about 1,500 units with an average size of 1,200 square feet.

Credo said that it has already received enquiries from major developers and funds. The competition for the 99-year leasehold land parcel is expected to be keen - with the reserve price at $1.2 billion dollars.

"If we do not receive bids above the reserve price, there is still potential for us to sell the site through negotiations, by a private treaty. In the new law we have 10 weeks for that, but I seriously think we don't need that," said Tan Hong Boon, deputy managing director, Credo Real Estate.

The price tag translates to a land rate of some S$844 per square foot per plot ratio.

The successful bidder will also have to pay about S$400 million to top up the lease and a development charge.

More than 80 per cent of Laguna Park's owners have given their consent for the collective sale, Credo said.

According to analysts, the draw for Laguna Park is the size of the plot and its proximity to the sea, which will provide the future development with a good view.

"If you look at the quality of land in Singapore, Laguna Park has got one of the longest stretches of sea, with coastal views. It's about 400 to 500m of seafront view and it's also unblocked on the other side. Very rarely you get a plot of land with such spectacular views," said Christina Sim, director, Investment, Cushman & Wakefield.

Observers said the developers are likely to use the opportunity to replenish their land stocks.

"Since March-April onwards, the absorption rate in the real estate market has been phenomenal. The take up is probably over 10,000 units already this year. It looks like developer stocks are really drying up. And because there's a huge draw down on stocks, the developers balance sheets are reflecting a really fantastic cash flow. They would be in the market to look at land banking again," she added.

Analysts said that the break-even land cost is around S$1,250 per square foot, and the future units are likely to fetch prices higher than that.

The units at The Silversea, another private development in the vicinity, recently transacted for as much as S$1,750 per square foot.

As per the analysts, even if the sale for Laguna Park goes through by the year end - launches shouldn't be expected any time soon. That's because developers will be waiting till after the integrated resorts open in 2010, before launching units for what many analysts call - a jewel in their crown. - CNA/sc
Posted by Richard Yeo at 12:27 AM No comments:

Govt May Be Taking Steps To Calm Down The Property Market, Say Analysts

The government could re-introduce land sales through the confirmed list and analysts said this could mean the government is taking steps to cool down the property market.

Last October, recession woes saw the government suspending land sales through the confirmed list. But now the government said it will consider re-introducing it for the first half of next year.

National Development Minister Mah Bow Tan said: "Now that the market is coming back, demand is coming back and the take-up is strong. There is every likelihood that we will resume the confirmed list."

This means land parcels will be tendered according to scheduled dates and this will translate to more residential property launches. But one analyst said while these changes will ease the market, they will take time to make any impact.

Nicholas Mak, property consultant, said: "This may be the first of actions by the government if they see that the property market shows signs of overheating especially if there is a lot of speculative buying, I think that could prompt the government to take further action."

Public housing prices have gone up by almost 35 per cent over the last two years and the government said it is expecting prices to increase even further. However, it said buyers should not be complaining because these price increases are part of the reason why people invest in the first place.

Mr Mah added: "When you buy an HDB flat, you are investing for your future. We subsidise when you buy, we increase the value of the flat as you live in it and encourage you or facilitate you to cash out when you grow old."

Mr Mah was speaking on Wednesday at the launch of the final skybridge at the Pinnacle @ Duxton, Singapore's tallest public housing project.

He said while public housing remains affordable, with a range of flats to suit people from all levels of income, Singaporeans should continue to buy within their means. - CNA/vm
Posted by Richard Yeo at 12:25 AM No comments:

A SMALL low-rise hotel in Joo Chiat Road is up for sale at an asking price of $20 million to $22 million.

Its owner, a local investment firm formed by a group of individual investors, is looking to sell now as market conditions are ripe, said Ms Yong Choon Fah, executive director of Credo Real Estate, which is marketing the property.

Joo Chiat Hotel, previously known as Astro Hotel, was put up for sale in a tender in 2004. The asking price was up to $9 million, though market watchers reportedly expected bids of only about $7 million. There were no bids.

The three-storey property - a conserved building approved for hotel use in the conservation district of Joo Chiat - has 68 guest rooms and one pub.

Both are leased by operators at a total gross annual rental revenue slightly in excess of $1 million, she said.

At $20 million, the buyer would secure a rental yield of 5.25 per cent for at least another year.

The sale tender comes about eight months after a ban on offering hourly hotel rates was put in place in Joo Chiat.

While the area boasts a rich cultural heritage, it has been tainted by vice activities.

Joo Chiat Hotel is one of the nine hotels in the area affected by the ban but Ms Yong said the owner's decision to sell has nothing to do with the ban.

She said the asking price takes into account the limited supply of hotels in the area.

Also, the property is near the growth area of Paya Lebar Central and has 'great potential for the realisation of an improved stream of revenue income and capital appreciation', she said.

The tender closes on Oct 6.
Posted by Richard Yeo at 12:22 AM No comments:

A conserved building approved for use as a hotel at Joo Chiat Road has been put up for sale by tender. 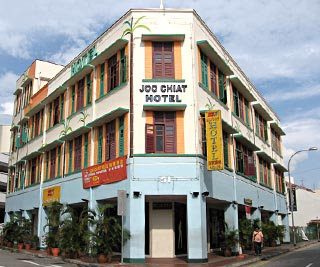 The property is owned by a local investment company, which is seeking offers in the range of S$20 million to S$22 million.

Joo Chiat Hotel comprises a 3-storey front section and a 4-storey rear extension, with 68 guestrooms and one pub. These are leased by operators at a total gross rental revenue of slightly over S$1 million a year.

Joo Chiat was gazetted as a conservation district in mid-1993, and is characterised by architectural styles of the turn of the 20th century as well as many Peranakan shophouses.

Property consultant Credo Real Estate said in a statement that the hotel, which is near Paya Lebar Central, is likely to benefit from appreciation in capital value as the transformation of Paya Lebar Central materialises.

Paya Lebar Central, one of the four targeted growth areas in the Master Plan 2008, promises to be a bustling commercial centre with offices, retail outlets, hotels and public spaces, Credo added.