WHEN pricing a new HDB flat, costs are not taken into account. Its price is based on what the unit is worth at the point of purchase.

'It reflects what the flat is worth at the point of purchase, which may have no relation to what it cost to build,' he added.

Mr Mah gave this response in Parliament yesterday to Mr Liang Eng Hwa (Holland-Bukit Timah GRC), who had asked if the Government would consider pricing flats according to costs.

The minister also said that as the HDB did not take into account costs, its building programme suffered losses of $530 million a year over the last three years.

He noted that there were concerns over the high prices of premium flats like those in Pinnacle@Duxton, with prices ranging from $457,000 to $645,000.

But the prices reflected the value of the flats, which are located in Tanjong Pagar. For every unit on sale, seven people wanted to buy it, said Mr Mah.

It shows people are willing to pay for flats with good value, he added.

That the market is the main driver of prices of resale HDB flats was also highlighted by Senior Minister of State for National Development Grace Fu.

Madam Ho Geok Choo (West Coast GRC) had asked why the cash that a buyer pays on top of the official valuation of a flat - known in the industry as cash- over-valuation (COV) - is proportionately so high for two- and three-room flats. Latest figures show the median COV for a two-room flat is $16,000 and for a three-room unit, $19,000.

Ms Fu said COV is based on several factors and varies in different segments of the HDB market.

COV also depends on market conditions and how much each buyer is prepared to pay, she added, noting it could drop and enter negative territory.

Two- and three-room units in demand from low-income families, downgraders

SINGAPORE will have more two- and three-room HDB flats next year to meet rising demand.

The Government is building these smaller flats to help more low-income families own homes and those home owners who need to downgrade because of financial difficulties.

However, he did not say how many more of these flats were to be built.

Instead, he stressed these flats were to meet a 'niche demand' and that the bulk of HDB homes being built will be three- and four-roomers.

The Housing Board stopped building two- and three-roomers in the 1980s.

But in 2004, three-roomers were re-introduced. Two years later, the HDB said it would resume building two-roomers to meet increasing demand and, since then, it has put on sale 539 of them.

The growing popularity of these smaller flats is a turnaround from the mid1990s when the overwhelming demand was for bigger four- and five-room flats, with few takers for the two- and three-roomers.

However, since 1997, following the Asian financial crisis, more and more people have clamoured for them as they were forced to downgrade.

Adding to the demand in recent years are older singles, who have been snapping up the three-roomers in central areas such as Tiong Bahru and Queenstown.

Most recently, there was overwhelming interest when 150 smaller flats - from studios to three-roomers - were put on sale last month. These were sited across the island, from Geylang to Sengkang and Marine Parade.

In one week, 2,426 applications were received.

Realtors interviewed expect the demand to keep on rising, especially with the lousy economic outlook.

PropNex CEO Mohamed Ismail foresees the 2002 scenario re-enacted next year. 'In the last cycle, with rising retrenchment figures, we saw many people who couldn't maintain their four- and five-room flats selling them for smaller ones, some doing so even at a loss.'

In Parliament yesterday, MPs worried aloud about the economic impact of the global recession on their residents.

Replying, Parliamentary Secretary for National Development Maliki Osman assured them the Government would do all it can to help Singaporeans hold on to their homes in bad economic times.

Mr Mah noted that HDB flats are affordable, pointing out that on average, owners use less than a quarter of their monthly household income for their mortgage. This is below the international benchmark of 30 per cent, he said.

Also, seven out of 10 new flat buyers service their mortgage entirely using their Central Provident Fund savings. 'Based on this, HDB flats have remained affordable, even though property prices have risen over the years in tandem with Singapore's economic growth,' he said.
Posted by Richard Yeo at 8:21 PM No comments:

Developers Want Govt To Turn Back Clock On Several Policies

Some property industry players are yearning for the good old days, hoping the government will reverse some of the changes in property policies made in the past two years and thus go beyond the usual exemptions and rebates on property taxes with its off-Budget/Budget packages. 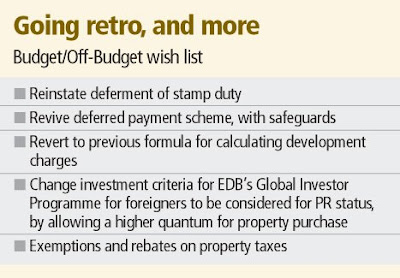 Such a strategy may be timely in helping to stimulate currently flagging property demand given that the measures were rolled out when the market was sparkling.

Developers are hoping the government will reinstate the deferment of stamp duty on property purchases where the property is under development (this was removed in December 2006) and revert to the old formula for computing development charge (DC) rates, based on 50 per cent of the appreciation in land value arising from changing the use of a site or building a bigger project on it. This was raised to 70 per cent in July last year.

Also high on the developers' wish-list is a revival of the deferred payment scheme (DPS) - which was scrapped in October last year - to boost home purchases, with a qualifier that safeguards be introduced to address concerns that such schemes had spurred speculation.

A major property developer also suggested a demand-boosting measure in the form of changing the investment criteria for Economic Development Board's Global Investor Programme to allow a higher quantum for property purchase or even lowering the total threshold value.

'More people taking up permanent residence or citizenship and landing on our shores will help the property market,' said the developer.

KPMG Tax Services executive director Leonard Ong said that granting exemptions or rebates on property taxes for completed commercial and industrial buildings will help landlords and hopefully they will pass on some of the savings to their tenants.

'Earlier this year, when property prices were on the rise, the government also raised Annual Values of properties. So based on this, owners would be paying more property taxes than last year. This makes it all the more important to introduce exemptions or rebates for property taxes,' he added. Property tax is calculated as a percentage of a property's annual value.

Developers are also hoping for property tax exemption for vacant land and land under development to reduce costs.

'During this period, the market is so quiet we cannot launch projects,' notes Ho Bee Investment chairman and CEO Chua Thian Poh.

Following the December 2006 rule change on stamp duty, property buyers are now required to pay stamp duty within 14 days from the date that the option to purchase is accepted.

The previous concession, introduced in June 1998, had allowed stamp duty payment to be deferred to the date of issuance of Temporary Occupation Permit for a project or date of sale of interest in the property, whichever was earlier, for properties under development.

Deferring payment of stamp duty for projects under development once more would lower upfront cash commitment for home buyers, some of whom may be stretched, especially since it could take a few years for the new homes they've bought to be completed, says Knight Frank managing director Tan Tiong Cheng.

Most developers are hoping the government will reinstate the DPS. They say DPS helped genuine home buyers, especially upgraders who may be able to sell their existing homes only when their new private home has been built.

Ho Bee's Mr Chua suggests modifications be made to DPS to allay concerns that it also facilitated speculation in the past.

'The most important thing is to require the buyer to secure a housing loan even if he does not need to draw down the loan immediately, to ensure a credit assessment of the buyer is done by the banks,' he said.

However, Ho Bee's Mr Chua disagreed with the suggestion by some analysts that the initial payment by the buyer - before the deferred payment kicks in - be raised from 10-20 per cent previously to 30 per cent, as that 'would not help home buyers much'.

Although developers are currently not in a race to redevelop their sites given the property slump, many argue that going back to the pre-July 2007 formula for computing DC rates - which creamed off a smaller portion of the enhancement in land value - 'would provide greater incentive for land owners to explore more productive use for their properties and could spur some activity', the head of a listed property group said.

Developers are also concerned about banks tightening financing to home buyers and to businesses in general, and hope the Monetary Authority of Singapore will use 'moral suasion' to send the right signal to banks.
Posted by Richard Yeo at 8:18 PM No comments:

4th Best Place To Invest In

THE global economy may be slowing, but Singapore is still one of top four places to invest in over the next five years, a survey of 260 global companies in 12 economies has found. 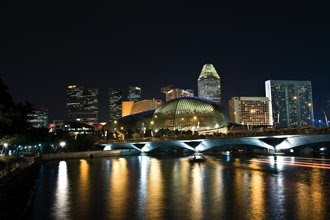 Singapore is still one of top four places to invest in over the next five years, a survey of 260 global companies in 12 economies has found. --PHOTO: SINGAPORE GP

The study, which was conducted in September and October and released on Wednesday by KPMG, ranked Singapore ahead of Hong Kong, and just behind China, the United States and India in terms of where companies would want to invest in.

However, the findings also showed that companies want the Singapore Government to do more to attract foreign talent and to lower taxes for businesses.

Mr Owi Kek Hean, KPMG's head of tax services in Singapore, said: 'We wanted to compare and contrast what businesses would like to see from the countries when deciding where to locate their operations.'

This is the first survey by KPMG on the importance of tax and demographics in influencing corporate location, which also tracks the investment decisions of companies over the next five years.

The survey includes responses from 20 Singapore-based multinational companies (MNC), each with a turnover of US$1 billion.

Mr Phillip Overmyer, the chief executive of the Singapore International Chamber of Commerce said of the results: 'That people are saying this is not earth-shattering, but the importance is in the timing of it.

'MNCs have said they want to make investments in the next two years, in the middle of the financial crisis we are in, and that these are the places they are going out of all the places in the world.'

'It confirms that people think Asia is the market of the future, that it will recover very early and it reinforces very strongly that Singapore will play a critical role in this development in Asia as the crisis starts to resolve itself.'

Mr Owi said what stood out for him was that Singapore businesses would like to see more tax incentives as well as looser restrictions on foreign workers.

In fact 70 per cent of respondents said that tax regime is an important factor in choosing where to locate their business, he said.

Another half of all respondents indicated that the tax policy of a country is more important than an educated workforce in deciding where to locate their business operations.

The survey also revealed that 65 per cent of respondents here look to the Goverment to work together with them to attract foreign talent. This is unlike in Europe where companies feel that attracting foreign talent is their own repsonsibility.

Mr Owi said: 'This shows that the expectations here is for a partnership between the Government and companies to bring in foreign talent.'
Posted by Richard Yeo at 7:26 PM No comments: